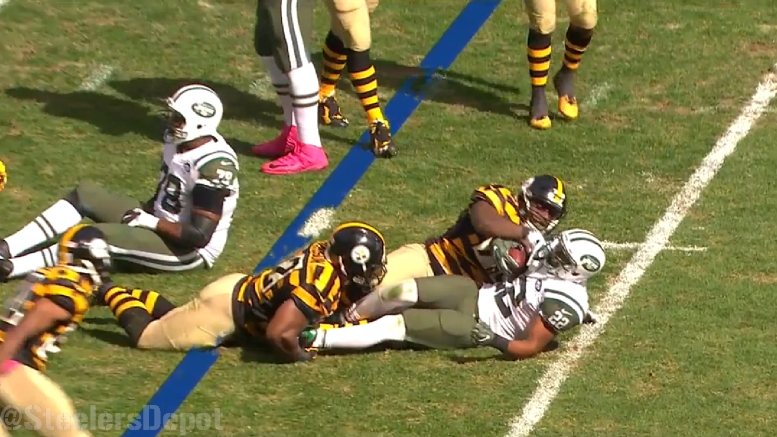 Sunday will likely stand to be the biggest game yet for rookie Javon Hargrave. With Pittsburgh Steelers defensive end Cameron Heyward out for the Miami game, the defensive tackle is expected to see a relatively high snap count. He played a good number of snaps last week when Heyward left the game with a hamstring injury, which gives us a bit of a body of work to look back on.

Hargrave actually played as early as the second snap of the game against the Jets after they opened in their nickel defense before checking into their 3-4 front. They shifted back and forth between snaps, and the fourth snap of the game came back up with a nose tackle.

On this fourth snap, the Jets were facing a second and two situation, and showed a run look. Hargrave lined up on an angle in the left-side A gap, but New York passed the ball. The nose tackle still did a nice job of getting a push into the pocket, but the deep drop from the quarterback left him in little danger, and the pass was ‘completed’ for 18 yards.

A bit later in the quarter, on the next defensive drive, the Jets quickly got into another second-and-short situation, but this time they actually ran the ball. At this point of the game, Heyward was still in, and Hargrave was still in at nose tackle, though this time he lined up as a zero-tech over the center.

But the Steelers ran a stunt with the left defensive end crashing inside and the nose tackle looping around the edge. With the end getting wiped out of the play, the back gained a wider lane than Hargrave was expecting, but he recovered and made the tackle from behind, though only after a four-yard gain for a first down.

Late in the first half, in the middle of New York’s touchdown drive, Hargrave was in the game as the right defensive tackle in the nickel defense on a first-down run, lined up in the B gap. With the Jets line running a zone sweep to the right, the rookie did a nice job of maintaining leverage ahead of the left tackle’s reach block attempt. When the back tried to make a cutback, he freed himself of the tackle and cut back with the ball carrier, grabbing him and standing him up before tackling him for a one-yard gain.

Early in the fourth quarter, the Steelers line showed a wide set in their nickel with the linemen set up as five-techs, Hargrave over the right tackle this time. Off the snap, however, he worked inside and charged the right guard, getting pressure, but the quarterback was able to get the ball out.

These are some of the plays that highlight the skill set that Hargrave is able to bring to the field right now, as well as a sampling of his versatility, playing all up and down the line in both directions. He certainly still has some work to do, but he can contribute, and he will in Heyward’s absence.