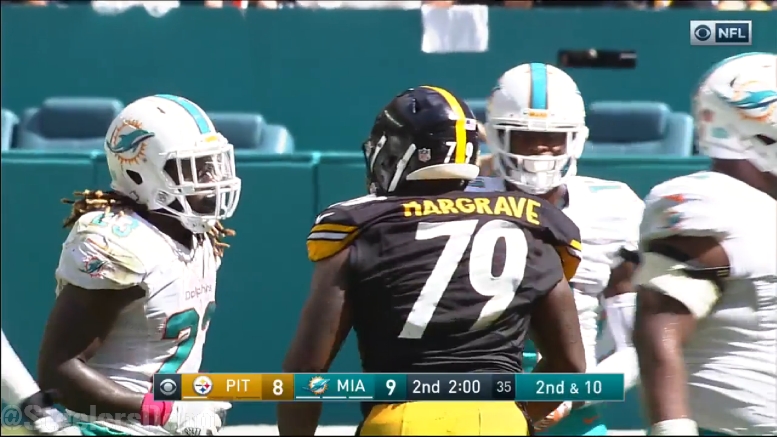 In spite of all of the offseason optimism about him, we really haven’t discussed rookie third-round defensive tackle Javon Hargrave a great deal over the course of the season, and even going back into the preseason. Of course, a large part of the reason for that is because his snaps have been limited, considering the Pittsburgh Steelers don’t run out of a 3-4 front often.

But he got an opportunity to see a lot of playing time on Sunday, during which he effectively replaced Cameron Heyward in the starting lineup, being the primary defensive lineman working with Stephon Tuitt as the interior pass rushers in their base nickel defense.

Now, it goes without saying just based on the results from the game that the pass rush didn’t do a particularly good job against a Dolphins offensive line that was under siege, but which was able to finally put together its starting five linemen that they have been looking to get together all season.

But overall, he had some highlights and some lowlights, the latter of which began with an early running play on which he appears to not have had the right defensive call. He initially stepped to his left while everybody else flowed to his right, creating a logjam that helped produce a first-down run.

He did make a nice play at the start of the second quarter against the run, during which he was able to win outside contain against the center on a zone run to the left. That forced the back to cut back, but Hargrave was able to adjust and work back to get in on the tackle.

The rookie managed to get the better of center Mike Pouncey again later in the second quarter on another running play, this time working to the offense’s left side. Not only did he control the point of attack on the sweep, he also gained penetration, and was able to shed the block once the back tried to cut it to his outside to make the tackle.

In light of some of the news that we shared over the course of the past couple of days, the play at the top of the third quarter might be a bit dubious, as Hargrave did extend his leg, but my focus is more on the fact that he once again was able to gain penetration to force the back to flow inside and got off the block to get into the play.

And once again, in the middle of the fourth quarter, Hargrave showed the ability to get off the block, as well as the agility to get after the ball carrier, to make the tackle.

Aside from the first play we looked at, it should be noted that these are more or less Hargrave’s highlights, although I wouldn’t place much of the blame on the overall poor run defense on him, which was more of a boundary issue than anything else.