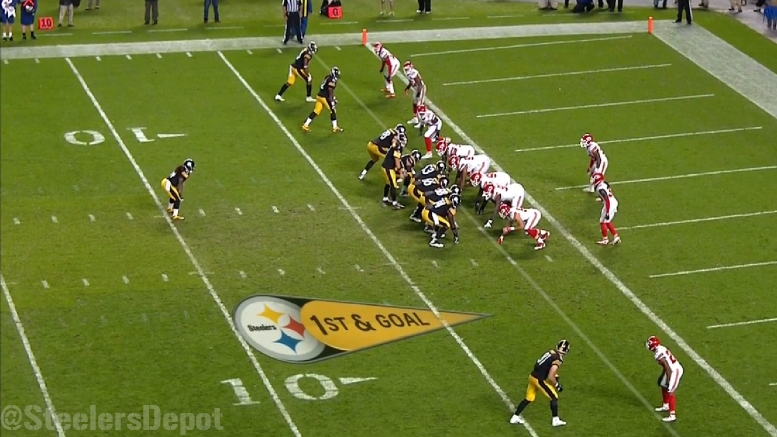 Normally during film studies I like to isolate on a specific player and highlight a handful of key or representative plays from his performance, but the Pittsburgh Steelers did a lot of interesting things on Sunday with their tight ends that I wanted to take a closer look at.

Take the first play of the team’s final scoring drive of the first half. The Steelers set up in an obvious run look with three tight ends, two on the line and one just shaded off for an eight-man front. After Ben Roethlisberger noticed a loaded box, he checked into a pass and motioned the receiver to the right side.

Jesse James, on his own on the left side, faded to the left, while Xavier Grimble on the inside on the right bent toward the middle of the field and David Johnson stopped and turned nine yards upfield. The movement and spacing left Johnson wide open in the zone scheme and was able to turn and run upfield.

On the second play of the third quarter, a three-tight-end look saw Grimble and Johnson block down on the right side, while James motioned left and moved upfield to block. On the following play, that set up a play-action pass to Grimble that left him one-on-one with a linebacker while the other two tight ends stayed in to block. The one thing that gave this play was that Grimble was the end man on the line, which he rarely is when he is one of multiple tight ends on a side.

About five minutes into the fourth quarter, the Steelers set up in a 22 look with Johnson in the backfield at fullback, but prior to the snap, he motioned to the outside on the left of the formation on a run that produced a four-yard gain, with the run going to the heavy side of the formation.

One of the more interesting snaps of the whole game came midway through the fourth quarter on first and goal from the two-yard line. The Steelers actually went with four tight ends with a tackle-eligible in the game. James lined up to the right of the line, Grimble to the left, and Johnson set up at fullback in the backfield.

Pre-snap, however, all three motioned out of their positions, James and Grimble going wide, and Johnson checking into the left slot. You can see the confusion this caused for the Chiefs’ defense, reminiscent to what the Patriots did to Pittsburgh in the opener last year. Had this play had a better throw, Grimble probably gets himself a score.

Finally, on the opening play of the team’s final ‘drive’, the offense set up with all three tight ends to the right, James the end man, but pre-snap, he motioned almost to a fullback position tucked behind the left guard to serve as a pulling lead blocker, producing a five-yard gain.

This was by far the most creative that the Steelers have gotten with their tight end packages thus far through the season, but that should not be a surprise as they continue to gain more confidence in this young group of contributors.