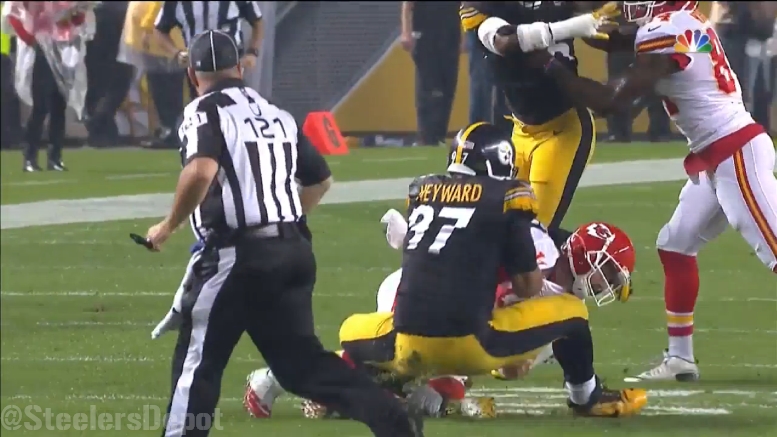 While Cameron Heyward’s three sacks on the day will necessarily draw the headlines, the truth is that both he and Stephon Tuitt at the defensive end spots were pretty consistently wreaking havoc for the Pittsburgh Steelers’ defense against the Chiefs.

On just the fourth play of the game, Heyward notched his first sack of the game. Kansas City used a sliding protection scheme to the left, but the veteran defensive end was able to get inside of the left guard and gain penetration, with Alex Smith ultimately unable to escape with Heyward rapidly closing in for the sack.

Later on in the first quarter, following the Steelers’ opening offensive possession, the Chiefs tried to double team down on Tuitt with the right guard and tackle. As a cornerback blitz funneled the run inside, Tuitt was able to split the double team and got a hand out as Spencer Ware tried to burst through a crease, with the ball coming out with him, which the defense recovered.

Establishing a pattern, the Steelers’ other turnover of the game was also produced up front along the defensive line. This time it was Heyward, who worked off the left tackle and stepped into Smith’s throwing lane, making an impressive adjustment in close quarters to swat at the ball and bat it up, allowing his teammates to run underneath it for the takeaway.

With the Chiefs looking to drive, on the Steelers’ 44, in a third and long, Tuitt looked to get back the right guard with an inside spin move, but spun into the help of the center. The center ran himself upfield, however, and Tuitt as able to shift more to the middle of the field, where he was able to step into the throwing lane and get a hand on the pass, redirecting it enough to force an incompletion, as Kansas City was forced to punt.

Late in the game, midway through the third quarter, Tuitt got the initial pressure on what wound up as Heyward’s third sack of the game, getting to the outside of the right guard and forcing Smith to step up into the pocket. The shift in position allowed Heyward to work off of his blocker and cut inside to clean up.

There were a number of other players that the Steelers’ defensive ends produced or contributed to throughout the game, too many to highlight. I didn’t even include Heyward’s second sack in this breakdown, nor the fact that they contributed to the fourth sack as well.

This was easily the best and most impactful game that Tuitt and Heyward played over the course of the first quarter of the season this thus, however, and that is what this film study is intended to express. The Steelers need these young studs to continue to build upon this performance and have a similar impact throughout the year.