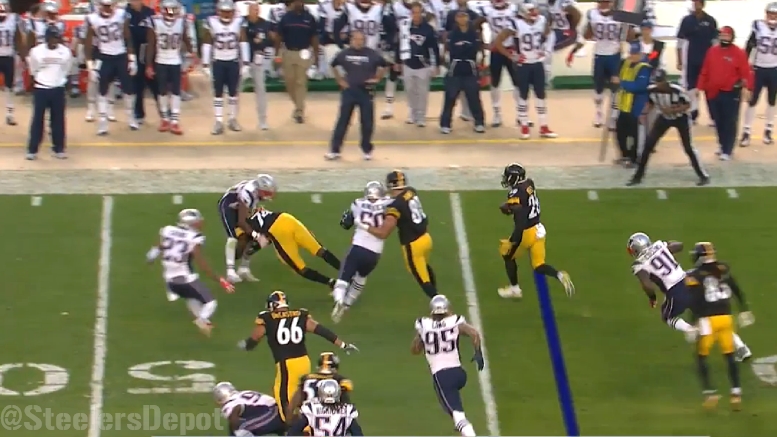 The Pittsburgh Steelers have had to rely on third-year reserve lineman Chris Hubbard over the course of the last three weeks due to a mid-foot injury to right tackle Marcus Gilbert, and over that span of time, the former undrafted free agent has played at the highest level that he ever has in his career.

That is not to say that he is about to render Gilbert and his hefty contract into a reserve swing tackle any time soon—the sixth-year starter fully intends to re-enter the starting lineup against the Ravens, by the way—but credit belongs where it is due, and Hubbard stepped up, including against the Patriots, even if he drew a crushing holding penalty under dubious circumstances.

His second-half work in particular is notable, and where I will be focusing my attention. On just the third play of the half, Hubbard swept to the right and led a running play up the right sideline, throwing an excellent cut block down the field on the safety to help produce an 11-yard gain.

A handful of plays later on the same drive, the Steelers pulled Hubbard around the left end, picking up Chris Long, but without the center able to pick off the linebacker on the second level, the play was blown up and limited to just a yard.

Still in the third quarter, on the team’s next possession, the right tackle showed good form working against the defensive end, getting his kick slide out smoothly and mirroring, absorbing the bull rush and ultimately getting the rusher pushed upfield, though not before he got a hand up in the air. The pass was completed to the right for four yards.

Toward the middle of the fourth quarter, the Steelers were facing a third down situation with three yards to go. Once again on this rep, Hubbard did a nice job of combating with Rob Ninkovich, even finishing him off by knocking him to the ground. On this play, the quarterback should have scrambled for the first down, but instead the play resulted in an incompletion.

Late in the game, Hubbard did give up pressure on a third-and-10 play that the quarterback was able to pick up seven yards on, for which he deserves credit. Here, the edge rusher, set up in a wide stance, was able to swing inside between him and the guard, but once the quarterback flushed the pocket, Hubbard did recover and got the rusher on the ground.

Obviously, when a backup is in the game, the expectation should never be a flawless performance, and we saw in this article that Hubbard was not without his mistakes. But he played well enough for the Steelers to operate, and, frankly, has really raised his stock over the course of the past three games, perhaps as the new Trai Essex.