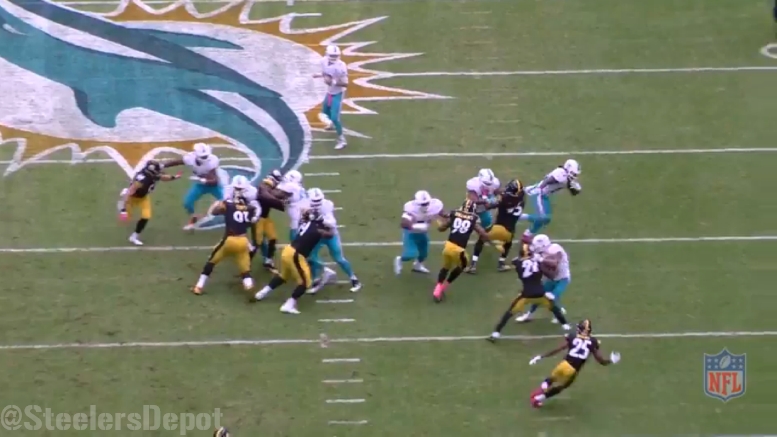 You might recall that I wrote an article shortly after the Pittsburgh Steelers finalized their first draft of their 53-man roster about the cornerback position, and in that article, I focused specifically on the nature of the cornerbacks that they have been adding in recent years, and how that relates to their ability to play the run.

I wrote in that article that the Steelers have assembled a group made up primarily of tall, relatively lanky cornerbacks who are potentially, though not necessarily, better geared toward playing man coverage with their backs to the quarterback.

By that same token, they are also cornerbacks who are not physical, and lack a presence in the running back, whether it is due to willingness or ability. And we really saw all of that come to a head on Sunday when the Dolphins put up 222 yards on the ground against a wounded Steelers defense.

With Pittsburgh missing several key pieces of their defense, particularly a pair of interior defenders who specialize in getting from sideline to sideline, the Dolphins took advantage of their absences by attacking the perimeters, which is where the majority of their damage on the ground came from.

And rookie first-round cornerback Artie Burns was a big part of that. While Burns showed in his college tape that he lacks physicality—he was often pushed out of running lanes by wide receivers, for example—his biggest issue on Sunday was failing to provide edge contain, which we saw a handful of times.

Take a run early in the game on Miami’s opening drive, with the Steelers in their nickel defense. In this end zone view, Burns, to the right, is not immediately on screen, but you see as the play gets underway that he actually cut hard to the middle of the field before seeing the running back taking the ball wide, and by then, he was far too late to recover before allow a first-down run. The Dolphins picked up chunks like this seemingly at will at times because of the perimeter contain.

Two plays later, we actually saw Burns respond to his failing on the previous play, and this time made sure, or at least tried, to maintain his outside contain, working downfield after playing off coverage against the playside wide receiver. He struggled late to break free of the blocker to get the runner out of bounds, but at least he was in the right position.

Later in the game, early in the third quarter, however, we found that the lesson didn’t necessarily stick, as the rookie cornerback once again lost contain, despite seeing the cue of the right tackle pulling all the way across the formation. His getting sucked inside led to an explosive play.

This is not to place all the blame on Burns for the lack of discipline on the perimeter, as Ross Cockrell on the other side had the same problems, but it would probably be redundant to do an article displaying both. This is just to give an example of one of the biggest issues the run defense had on Sunday on one of the worst days in their history.