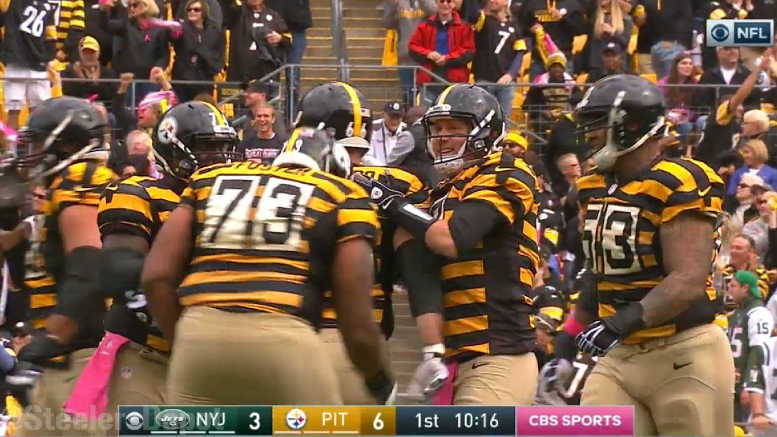 We were warned prior to yesterday’s game that this would be the last in which we would have the tremendous opportunity to watch the Pittsburgh Steelers don their 1934 throwback uniforms in a game—affectionately, or perhaps not so affectionately called the ‘Bumblebee’ uniforms—in which they have found success over the past few seasons.

Overall, I believe they finished things off with a 4-2 record in their latest edition of the throwback jerseys, including a strong 31-13 victory yesterday over the Jets. It was another feel-good moment, and the last that we will get in the Bumblebee attire.

Understandably, the uniforms have been polarizing. They are not the most aesthetically cohesive, nor are they flashy. They are not even congruent. With some combination of black-and-yellow striped jerseys with numbers in large white boxes and light brown monotone pants, they are certainly an acquired taste.

But they are a part of history, an honored part of history, for the Steelers franchise, even if they do not actually represent a high point in the organization’s history. 1934 was their second season, long before their glory days, which were about four decades away by that point. It was, in fact, exactly four decades from then that they won their first Super Bowl.

Might their seventh Super Bowl come in the year that the throwbacks are put into retirement? If the first five games of the 2016 season are any indication, the odds would seem to be good, as they have won four of their first five games for the first time since 2010, the last time they reached the game, and they won three of them by at least three possessions.

That included yesterday’s 31-13 victory over the Jets, in which the offense and defense both did their part. Ben Roethlisberger threw four touchdown passes to three different players, and they added a field goal to boot, while shutting down New York in the second half.

The offense put up 433 yards, while holding the Jets to 310, with the vast majority of that yardage coming in the first half, when New York scored all of their 13 points.

The 18-point margin was just the third-best that the Steelers have managed this year, but the 13 points are actually the lowest point that the defense has allowed through the first five games. It was also the first time this season in which the defense was able to shut down the opposing team in the second half.

It was a fitting salute, and a fond farewell, to the ‘beloved’ 1934 throwbacks, the Bumblebees, in which the Steelers have authored some fine victories in the past few years. This team may not look like the one that took the field over 80 years ago, but they certainly paid appropriate tribute to the Steelers teams that came before.