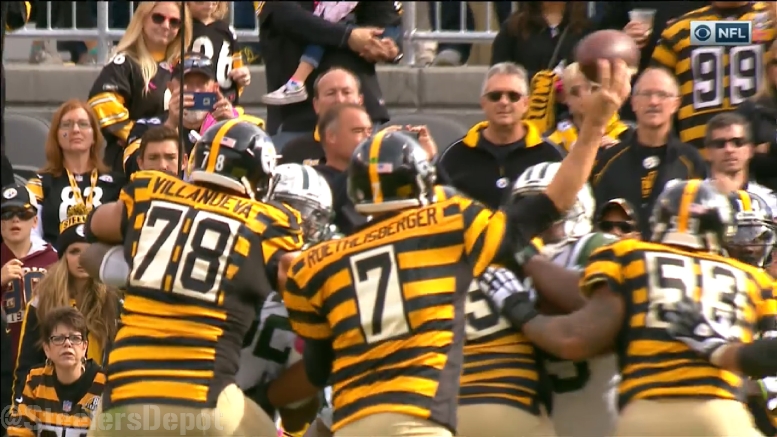 Pittsburgh Steelers quarterback Ben Roethlisberger has grown a reputation over the course of his career that is not wholly applicable as it once was. Frequently referencing Brett Favre, Roethlisberger early on was defined as a sort of streetball player, excelling more when the play breaks down and he can use his size and his arm to make a play rather than trying to execute a well-honed plan.

Perhaps that characteristic was accurate early on in his career—and he no doubt has more than his fair share of big plays that are the product of his ability to extend the play beyond what the usual quarterback would choose, or be able, to do—but he has, especially in recent years, also become quite a cerebral player.

Particularly with the arrival of offensive coordinator Todd Haley, who was brought in with a mind toward keeping Roethlisberger better protected—but also with the youth movement that forced him to take a greater part of the ownership of the offense and the game plan—Roethlisberger has come to excel at both the quick-release and the short passing game.

This season has been no different, and perhaps even particularly illuminating. According to Pro Football Focus, Roethlisberger has the third-best quarterback rating in the league through the first six weeks of the season on throws that took 2.5 second or less from snap to release.

Of course, it should also stand to reason that a player performs better when he is able to get the pass off quickly as opposed to when it takes longer. Generally speaking, a passing play will typically be designed to get the ball off relatively quickly, usually within two or three seconds from the snap, provided that everything goes as the play was designed for it to go.

But there is also a difference between efficiently running a quick-hitting offense and excelling while doing so, and Roethlisberger’s quarterback rating shows that he is excelling when he is being given the opportunity to get the ball out in an orderly fashion. While it would be beneficial to get an actual statistical breakdown on his passes based on the time from snap to release, that was not provided, nor do I have access to the data.

Still, taking Pro Football Focus’ data at face value, this performance can be seen as a culmination of a years-long process of honing the offensive game plan between Haley and Roethlisberger over the course of the past five seasons. It has borne fruit, but now we will have to wait until he is able to return from injury to see it continue.