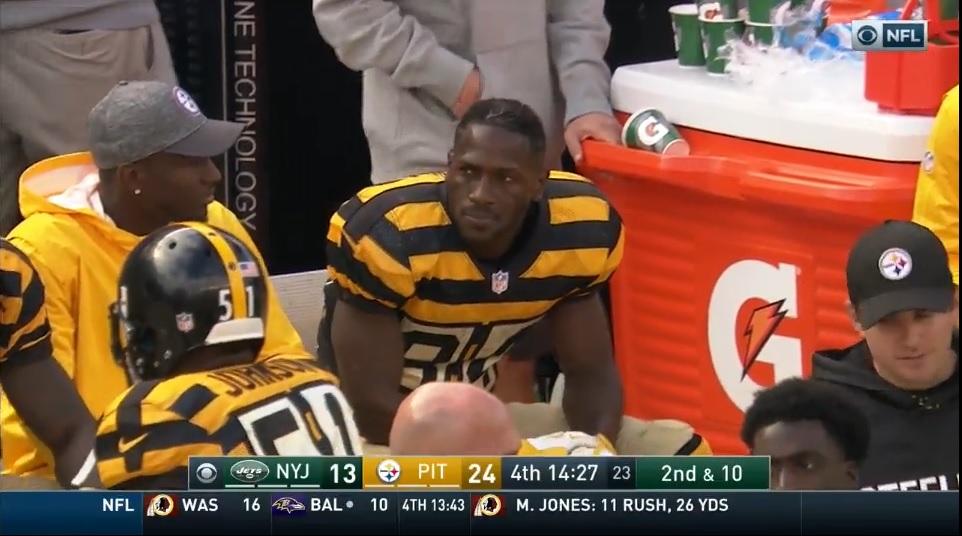 In the final result, a multi-possession win for Pittsburgh, this game wasn’t too weird.

But these stats are.

– Arbitrary fun with the box score. This, according to Pro Football Reference, is the first ever 31-13 game the Pittsburgh Steelers have ever been involved in, win or loss. Kinda weird given how common the numbers are.

– As I tweeted out, Le’Veon Bell’s nine receptions make him only the second back in Steelers’ history to catch that many in a game. Franco Harris is the other, doing it three times, and holds the single game record of 11.

Despite missing the first three weeks, Bell is still on pace for 91 receptions this year, which would be his new career record.

– Ben Roethlisberger is responsible for five of the six 350+ yard, 4+ TDs, 0 INT performances in Steelers’ history.

Those five games is tied with Peyton Manning for the third most in NFL history. Only Tom Brady and Drew Brees have done it more. Brett Favre only did it twice. Ditto with Dan Marino. Joe Montana and Steve Young only once.

– Sammie Coates has six reception games in back-to-back weeks. He did it just once in three years at Auburn.

– Antonio Brown now has 22 games with at least nine receptions in his career. This surpasses Hines Ward for the most in Steelers’ history.

Combined, they account for 60.5% of the times it’s happened in Steelers’ history. No other Steeler has done it more than three games.

– Jesse James had six catches in a game for the first time in well over two years. The last time it happened was August 30th, 2014 in his final year at Penn State. He did such only two times in college.

– And Anthony Chickillo picked up his first sack since college, the last one coming October 23rd, 2014.

– Vince Williams has two sacks this season, tying the most he’s ever had in a year. Happened his junior year at Florida State.

– Finally, Pittsburgh played a very clean game today. Penalized just once for ten yards. Only third time it’s happened in the past four seasons. For whatever reason, it’s happening a bit more frequently.

From 1996-2011, the Steelers did it four times. It’s now happened four times since 2012, including once in each of the last three seasons.