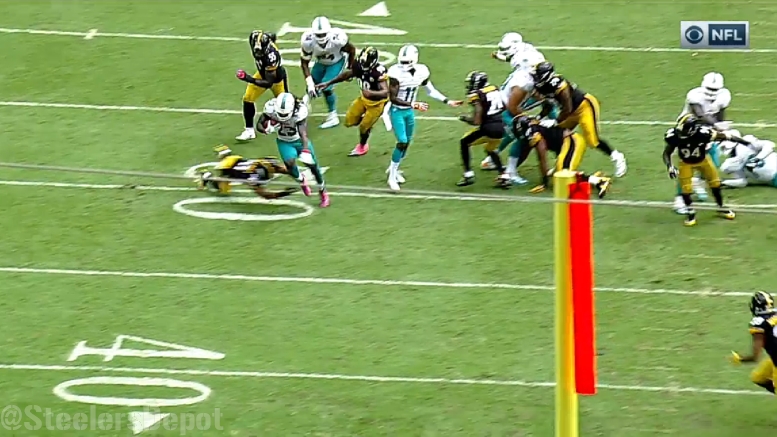 The Pittsburgh Steelers got a glimpse into what their defense looks like without Cameron Heyward today and it wasn’t a good look. They gave up 474 yards, including 222 yards on the ground, and it was the success on the ground game that is the only explanation for why the Dolphins did not have over 300 yards through the air, though they did have 252.

But it was, of course, the ground game that was center stage for the Dolphins’ offense, and for the Steelers’ defense, as they were repeatedly ripped on outside zone runs, with second-year running back Jay Ajayi having a career game against what was supposed to be on paper one of the better run defenses in the league.

Ajayi was by far the primary offender for the Steelers’ defense, as he accounted for 204 yards on his own on 25 carries and scored two touchdowns, which including the game-sealing 62-yard run that followed a Miami onside kick recovery after Pittsburgh made it a one-possession game with about a minute to play.

Basic math tells us that the Steelers gave up over eight yards per play when Ajayi ran the ball, but even if you factor out the long 62-yard run, it doesn’t get that much more palatable, as the defense still surrendered nearly six yards per carry, or 142 yards on 24 carries.

That is because Ajayi was able to consistently rip off runs of double-digit yardage, from the beginning of the game to the end. His first carry went for 12 yards off the left end of the offense, and his second carry went for 10 off left tackle.

Just before halftime, the second-year back opened up the Dolphins’ touchdown drive with a 14-yard run between the tackles, and added a 20-yard run around left end early in the second half. Around the right end, he added a 33-yard tote to begin Miami’s second drive of the half. And then, of course, there was the 62-yarder.

When you allow a running back to gain 10 yards or more repeatedly throughout the game—in this case, six times—it is a sure indication that there is some type of issue. Considering that all but one of them came around the perimeter, it is a clear indication that the sideline-to-sideline defense against outside zone runs is severely hindered without Heyward’s discipline and Ryan Shazier’s speed.

It didn’t help that multiple defenders came and went over the course of the game with minor injuries, cramps, and other ailments, but the bottom line is that the Dolphins’ maligned offensive line, now playing together with a full deck, dominated the Steelers’ front seven, who failed to record a sack either.

As we learned against the Eagles, of course, one game is just one game, and the Steelers will bounce back and play better than this, if not next week against the Patriots, then after their bye. But games like these do reveal that there are issues that are only masked when they win.