On Friday, the Pittsburgh Steelers ruled out Ryan Shazier for his second consecutive game of the 2016 season following a knee injury suffered against the Philadelphia Eagles. Due to Shazier’s intensive injury history, this story may seem like an annual feature that resurfaces again and again. This will be mark Shazier’s third consecutive season in missing time due to an injury, an action that has resulted in him missing the third most time out of all members of the 2014 1st round draft class. 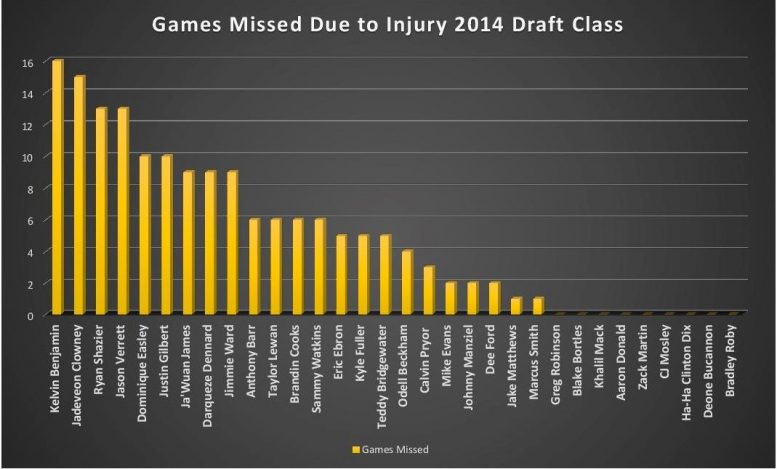 Looking at the chart above, Shazier ranks 3rd in time missed with 13 games in just over 2 seasons, leaving him just behind Jadeveon Clowney (15) and Kelvin Benjamin (16). Considering that this chart does not take into consideration that Benjamin was placed on IR before the 2015 season began means that Clowney and Shazier would share the top spots for most injured.

Shazier’s replacement, Vince Williams, is certainly no slouch at the position but cannot replace the X Factor that the Ohio State product brings to the defense. The middle linebacker’s speed and playmaking abilities are of incredibly rare nature in the new era of NFL defenses where linebackers must be able to cover both running backs and physical tight ends. Shazier’s fast start to the 2016 season shows exactly what he can bring to the defense, accounting for 20 tackles, 1 interception and 1 forced fumble in 3 games.

Shazier’s services will be unavailable for this Sunday’s matchup with the New York Jets and both he and the Steelers will be hoping for a return as soon as possible. Shazier’s addition would be welcoming to a defense that is already missing Justin Gilbert, Senquez Golson and Robert Golden due to injury. If a return is not in Shazier’s immediate future, the 24-year old linebacker could see himself taking Benjamin’s crown of most games missed from a 2014 1st Round pick very soon.