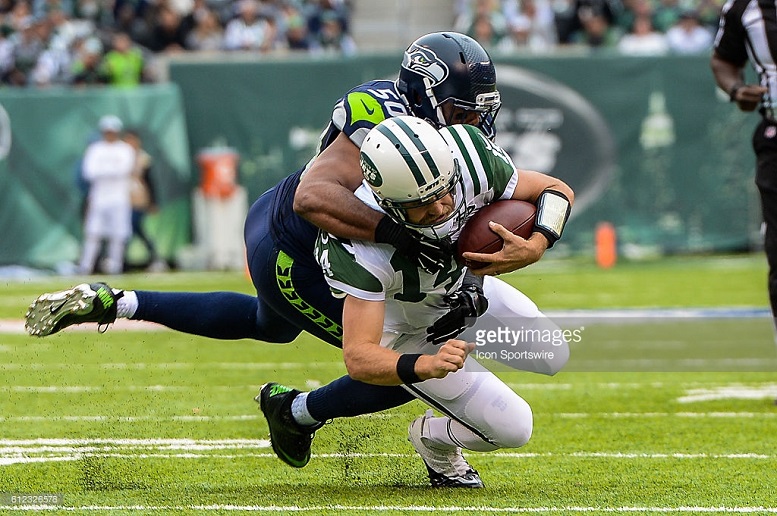 The Pittsburgh Steelers will play the New York Jets Sunday at Heinz Field and that means they’ll face veteran quarterback Ryan Fitzpatrick, who hasn’t played very well in his team’s first four games of the season.

Now that I have had time to go through the Jets Week 4 game against the Seattle Seahawks, I have some Fitzpatrick passing stats to pass along to you.

As you can see below, not only do I have Fitzpatrick’s time to throw and time to sacks numbers for you, I also have included the number of rushers the Seahawks sent on each and every passing play in addition to whether or not they blitzed.

For starters, Fitzpatrick had an average time to throw or sack of 2.42 seconds against the Seahawks. It should be pointed out, however, that on 31 of the 48 plays listed below that Fitzpatrick got rid of the football in 2.4 seconds or less.

The Seahawks, as you can see in the chart below, didn’t blitz Fitzpatrick very much at all during the first two-and-half quarters of the game. In fact, they only blitzed him twice in first 29 pass plays and just 4 times in the first three quarters. Against the blitz, Fitzpatrick was 6 of 8 passing for 93 yards. He was, however, sacked on two other blitzes by the Seahawks. 5 of those blitzes came in the fourth quarter on obvious passing downs and several of those with the Seahawks up by 14 points.

While the Seahawks showed blitz a few other times during the game, they predominately used a four-man pass rush and it was very effective. While a few stunts were also used by the Seahawks, there weren’t many of them. Against 3 and 4-man rushes, Fitzpatrick completed 17 of 36 pass attempts with 1 touchdown and 2 interceptions. He was also sacked twice.

Fitzpatrick threw 12 passes against the Seahawks that flew more than 15 yards past the line of scrimmage and he completed just 3 of those and had one interception, which came on the Jets last offensive play of the game. 2 of those deep incompletions went down as NO PLAYS as they were erased by penalties.

It will now be interesting to see how Steelers defensive coordinator Keith Butler chooses to defend Fitzpatrick on Sunday. While we could see more blitzes than the Seahawks used last week against the Jets, I’m guessing several of those will still only include 4 pass rushers being as Fitzpatrick is deemed a smart quarterback and knows when to get the football out quickly.

While Fitzpatrick has indeed had a rough start to the season, which has included him throwing just 4 touchdown passes and 10 interceptions. He’s only been sacked 6 times all season with the 4 of those coming last weekend against the Seahawks.