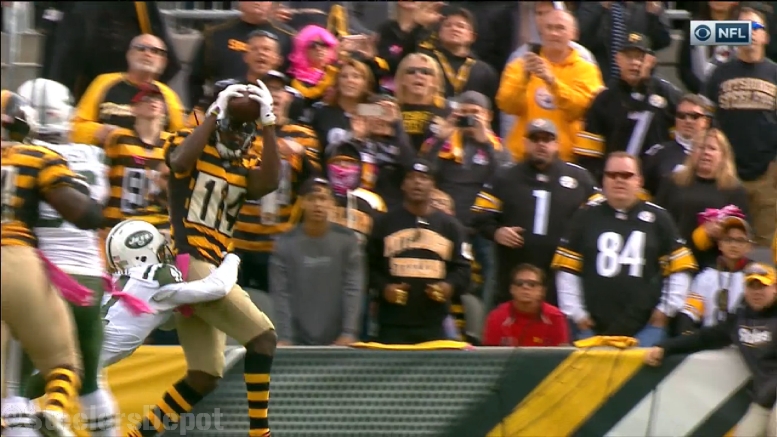 It was an excellent start for Sammie Coates, opening today’s victory over the Jets with an impressive 72-yard touchdown strike on a third-down play. It was the first touchdown of the second-year Pittsburgh Steelers wide receiver’s career, but what followed was a bunch of seesawing before finally ending the day on a high note.

In fact, he rode both the physical and emotional rollercoaster to—statistically, at least, his most productive day of his young career, compiling a stat line that included six receptions, tying a career-high, for 139 yards, and two touchdowns. It was his first 100-yard game, and, obviously, his first multi-touchdown game.

Those six receptions came on 11 targets, nearly all of which were questionable, and three of which, at least, could have been fairly characterized as dropped passes. Early in the first half still, he dropped an easy touchdown pass on a goal-to-go play right on the goal line, but the Steelers were fortunate to come back on the next play to score.

Coates also had an opportunity earlier on that same drive to score his second touchdown of the game on a 23-yard pass into the end zone, but he slowed up at the goal line on his route, and ended up stretching out a bit to try to reach the ball.

Coates also worked back to the ball earlier in the half on a third-down pass that he did a nice job of getting to, but he let the ball go through his hands. In the second half, he dropped a screen pass early on, and then had an opportunity at yet another pass that could have gone for a score.

This one was another deep target, one on which he could have been flagged for offensive pass interference on after he pushed the cornerback as he looked to go up to try to snag the ball. He was in position to make the play from 31 yards out, but was unable to haul in the ball.

The number of would-have, could-have, should-have moments in the game for Coates may certainly work to diminish what was still a productive afternoon for the second-year wide receiver, but these are moments that cannot be ignored in his game, aspects of his craft that still clearly need to be developed, after he looked to be advancing in those aspects just a week earlier.

It is good that Roethlisberger consistently looked by to the young receiver’s direction to try to redeem himself, and frankly, he did not always manage to do so. But he finished the day on a high note, snagging three receptions on the Steelers’ final meaningful of the drive, including his second score.

What we have seen this year from Coates is that he is clearly talented, and clearly has the ability to both get open and to make plays. But he will not capitalize on every opportunity, and his reliability will vary as he looks to round out his skill set. His college scouting report is coming to life, but he is still contributing in a very meaningful manner through his growing moments.