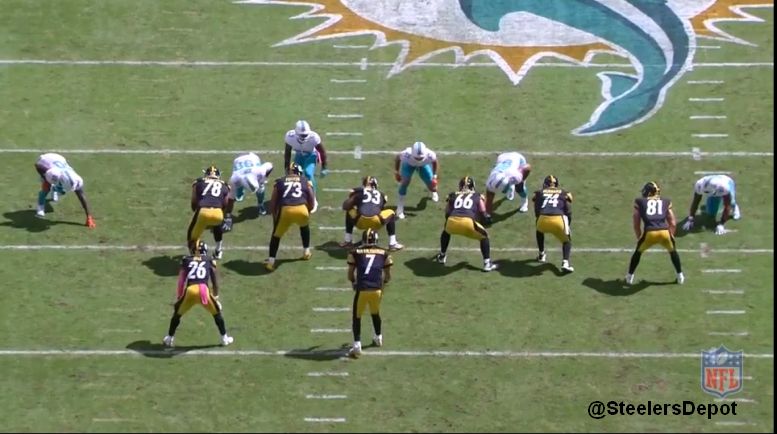 Two (sort of) sacks this week to go through.

I say sort of because this sack was wiped out by penalty yet it still counts in the official stat book. I’m sure there’s some nuance in the rulebook I’m missing and we’ll keep this on the list, but it seems a little silly. I guess it’s because it was the unnecessary roughness call, not the defensive holding, that was accepted.

Both three techs for the Dolphins run a stunt with the LDT looping over the crashing RDT. Ramon Foster doesn’t pick it up in time and it creates a free lane. 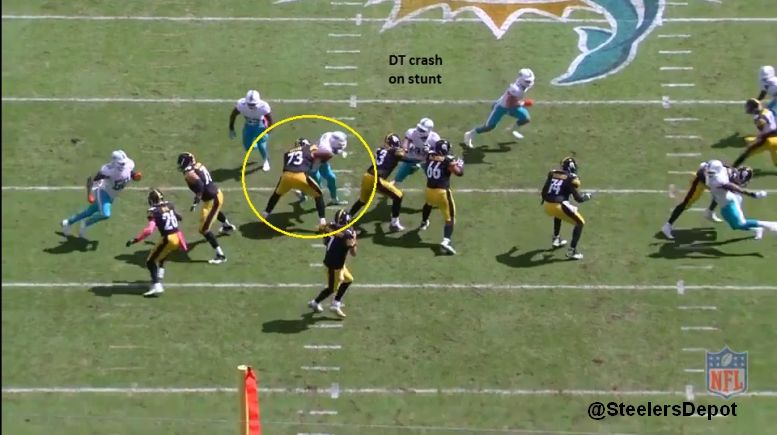 But that isn’t who gets home. RDE Andre Branch puts a nice speed bull rush on Alejandro Villanueva. He’s lower and able to shoot his hands, getting into Villanueva’s chest – an issue for the tackle all year long – and walking him back. He struggles to rebuff it and gets taken into Ben Roethlisberger, who goes down. 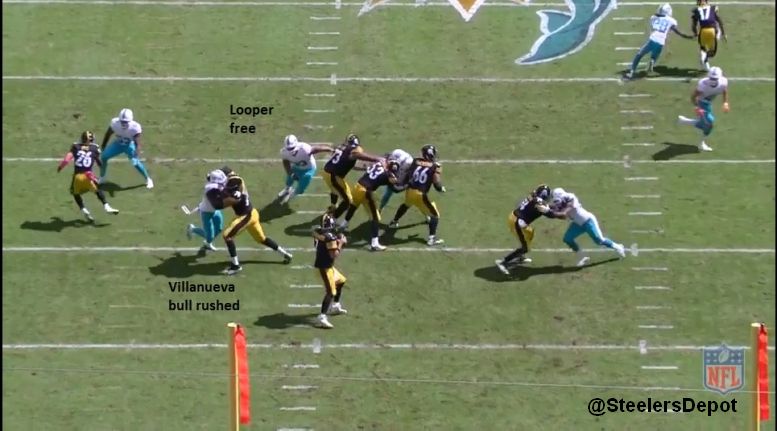 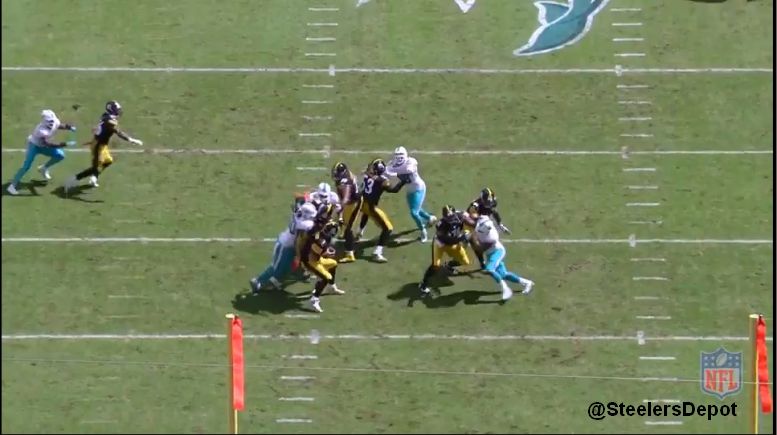 The looping pressure didn’t give Roethlisberger anymore confidence to hang tough in the pocket so I’ll give some of the blame to Foster as well along with the obvious problems Villanueva faced.

Blame: Half on Foster, half on Villanueva 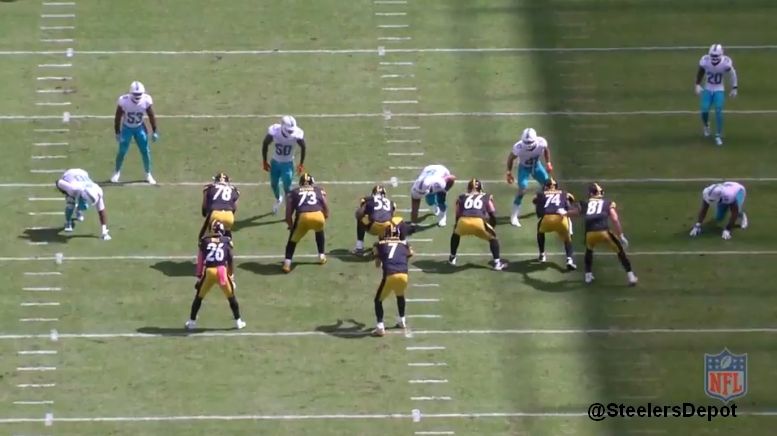 It’s a slide protection to the left and the six blockers, the five linemen and tight end Jesse James are responsible for their parts of the triangle. 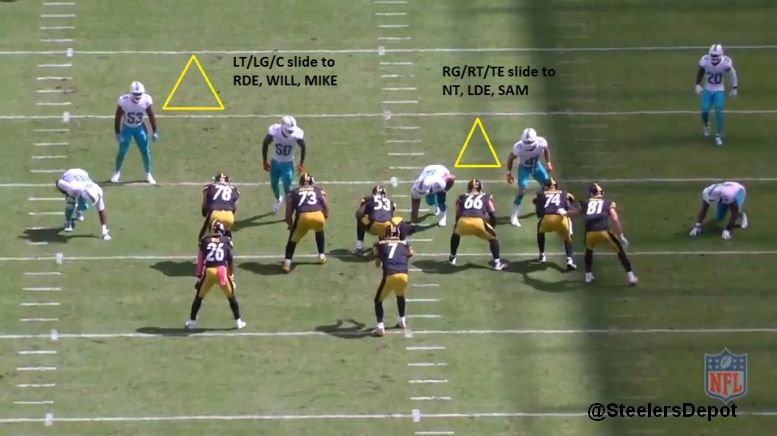 That’s how James ends up by himself on Cameron Wake, their best pass rusher. Without my commentary, that’s something tight ends in this offense are asked to do on a regular basis and something James has done since his first game in Pittsburgh.

Not that that makes the matchup any easier to deal with. From his Wide 9 technique, Wake dips and rips under James, swaps hips, and is on his way to the quarterback. 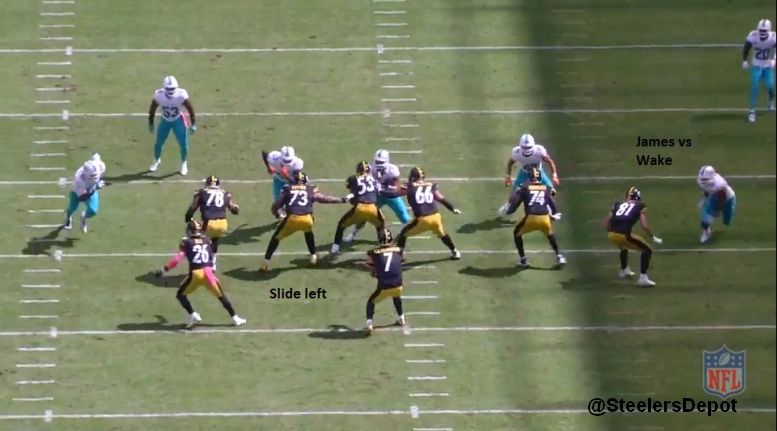 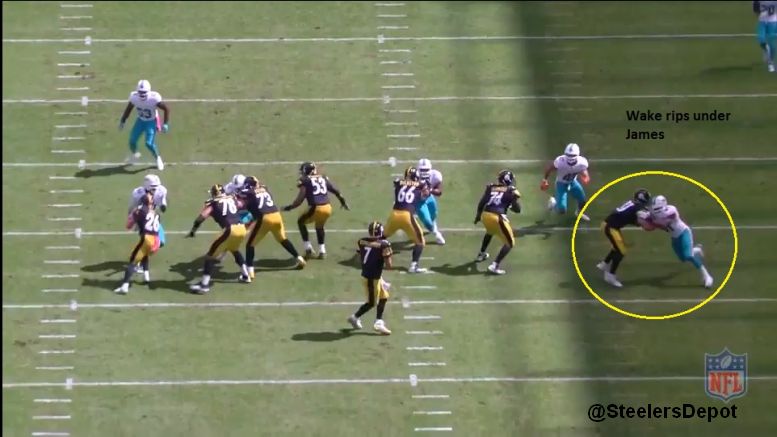 Villanueva again has issues with a bull rush. I don’t believe he was tripped up here on this Miami stunt. He struggles to get low and run into the pocket, unable to establish his base with both feet on the ground, his right foot/leg coming up in the air and sapping him of any power. 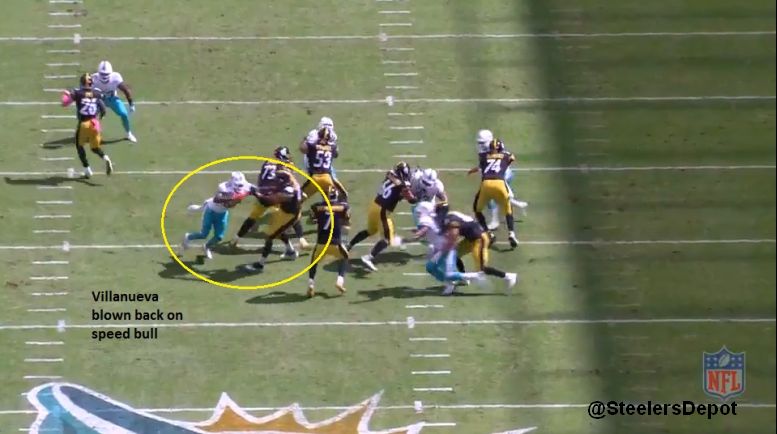 As you can tell, he gets pushed back pretty badly too and his guy meets Roethlisberger at about the same time Wake does, though Wake is what garnered the attention of the camera crew in the analysis.

Both were at fault here and get part of the blame for the sack.

Blame: Half on Villanueva, half on James