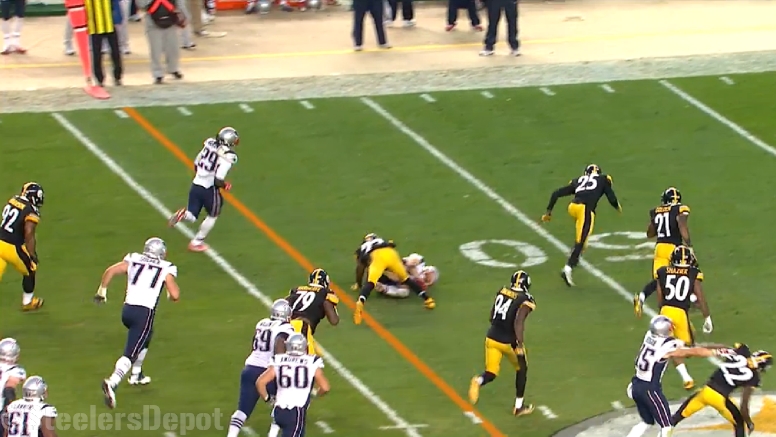 After the Pittsburgh Steelers gave up a heap of yardage on the ground to the Ravens last year, head coach Mike Tomlin said after the game that they were willing to give up some in the ground game in order to play tighter in other areas of the defense that they thought were bigger areas of concern.

Tomlin echoed similar comments just today after their 27-16 loss to the Patriots, who put up 140 rushing yards on the ground, including a 127-yard rushing performance from former Steeler LeGarrette Blount on 24 carries, in addition to two touchdowns. He was hoping to limit Tom Brady, but they could not stop the run for long stretches of the evening.

This is, of course, following a game in which they allowed the Dolphins to run all over them to the tune of 222 rushing yards, which included a 25-carry, 204-yard day from second-year Miami running back Jay Ajayi, who also added two touchdowns into the mix.

And on both occasions, a lot of the blame for chunk yardage could be placed on the boundary defense. Blount’s longest run of the day was a 25-yard scamper off of the right side of the defense, where rookie Artie Burns was playing at the cornerback position. That was right after an 11-yard carry allowed up the middle.

Later in the game, Blount had another 11-yard run off left tackle again, and even though he only had two runs that went for double-digit yardage, he had plenty of efforts that picked up seven or nine yards at a time. Those amount to large paper cuts that slowly bleed the defense and wear them down physically.

That factor should not be ignored, considering the fact that Blount is a big, physical back, and the Steelers were fielding a defense that was thin on depth and missing some starters, or having them play limited roles due to injuries.

Considering the fact that the defense has given up back-to-back 100-yard rushers over the course of the past two games, perhaps it should be time to get concerned about the quality of the run defense—even though, admittedly, both performances happen to have come in the two games that Cameron Heyward missed, and Ryan Shazier only returned today on a limited basis.

What is equally concerning is the fact that the Steelers have now given up five rushing touchdowns over the course of just the last two games alone, and eight rushing touchdowns over the course of the season, which is more than they allowed all throughout the 2015 season. The defense is giving up roughly 4.7 yards per carry now on the season, which is, in a word, terrible.

Something has got to give, as the Steelers now find themselves in the bottom 10 of many rushing statistics, and their yards per game allowed on the ground is slipping in that direction with teams running the ball against them more in recent weeks.