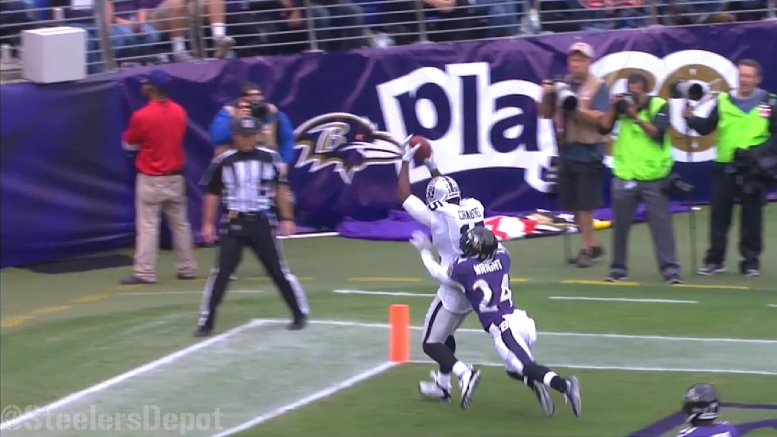 While the Baltimore Ravens were able to get out to a 3-0 start to their season, anybody who watched the game understood that all was not well, and that their record was not necessarily representative of the talent that they had on their roster. It helped that they played three below-average teams to start the season.

While they put up a good fight, they notched their first loss of the year in week four to the Raiders, courtesy of a late touchdown grab from Michael Crabtree, his third of the game. You probably saw the highlights of that play, a nice snare in the back of the end zone.

You might have also noticed a couple of Ravens defenders in the frame as well, and you may even have realized that it was number 24, cornerback Shareece Wright, who was beaten with a double move that allowed Crabtree to get behind the secondary for the score.

It was Wright in coverage on Crabtree’s first touchdown as well. In fact, he has given up five touchdowns over the course of the past three weeks after playing very well for the Ravens’ defense in the season opener—admittedly against a very underpowered offense.

Wright is aware of all this, of course. “I just have to get out of this slump”, he said recently, “and hopefully it won’t last long.” Asked what he was trying to focus on to make corrections, he said, “just don’t give up on yourself, and know that you can do it. It’s not a physical thing. I have the ability to play this game”.

But he has given up 16 receptions on 25 targets for 205 yards and five touchdowns, which over the course of a full season would, of course, be dreadful—the scores in particular. And the Ravens are counting on him to right himself before his struggles begin to snowball.

“I feel like I was kind of pressing to make a play”, he said about his play against the Raiders, “because things weren’t going well, and I felt like I needed to make a play”. He continued, “in those moments, you can’t press to make plays. You just have to let the plays come to you, most importantly”.

He said that “one play can turn a game all bad for you”, and that one good play could have the opposite effect, so his comments would seem to suggest that he is aware of how an early showing could impact how he handles the pressure of the rest of the game. Success builds upon success, and failure builds upon failure.

The Ravens are considering making a change in the starting lineup at the cornerback position because of his struggles, but no decision has been made on that front as of the time of this writing. But for what it’s worth, it seems his teammates are still confident in him.