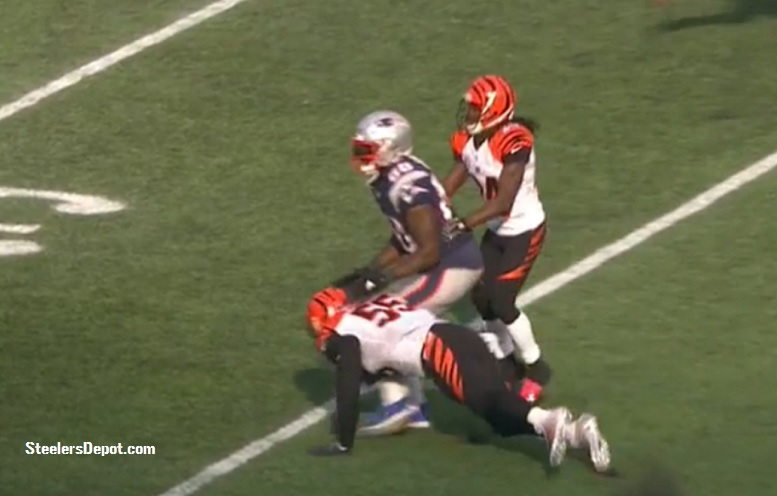 It won’t be long now until we find out whether or not the league will take any disciplinary action against Cincinnati Bengals linebacker Vontaze Burfict after he was involved in two separate incidents during Sunday’s game against the New England Patriots. Pittsburgh Steelers guard Ramon Foster knows all too well about Burfict’s questionable on-the-field antics and on Tuesday he made his thoughts known on what he thinks about the Bengals linebacker during an interview on 93.7 The Fan.

“It’s frustrating to continue to see that go on,” said Foster. “For one, I just can’t understand the mentality of him and two, those are the same things that he’s been doing for a while. But the low hit on Martellus [Bennett], it was insane and I know people are going to defend him and people are probably going to bash me for saying, ‘Hey, just you worry about your players,’ but this is the livelihood of other guys. If you look an inch or two inside, if he goes more on on Martellus, then that guy’s out for the season or at least for a long extent of time. With the leg stomp on LeGarrette Blount, that guy has a wife and two kids. He’s trying to make his way in this league.”

Foster then went on to reference several of things that Burfict has done in games against the Steelers.

“If you guys remember last year, the penalty that I got on him where he stepped on my foot and it looked like I was retaliating back and stepping on his, he’s been doing that for the longest. He stepped on Dave’s [David DeCastro] leg on the pile on the goal line last year. I think he did something to Rosie Nix, too, in that same manner. And I also saw another clip to where when him and Gronk [Rob Gronkowski] got into it, he did the same exact thing. He stepped on LeGarrette’s leg and his shoe came off and I’m looking at him like, yep, that’s the same exact move that he’s done to me, too.”

Foster continued on with his thoughts as to what he thinks the league should do about Burfict.

“There’s no place for that, man,” Foster said. “To continuously do it – one or two times, okay I get it, but every single time? A stake has to be driven into the ground on this guy and I’m not sure what they care about, touchdown celebrations or player safety, but something has to be done.”

In case you missed the two plays in question from the Bengals game against the Patriots, I have animated gifs of both below.

In the first one, Burfict went after the knees of Patriots tight end Martellus Bennett and in the second one, he stomped on the foot or ankle of running back LeGarrette Blount.

Burfict missed the first three games of the season due to a suspension after he took an illegal shot at Steelers wide receiver Antonio Brown late in last year’s Wild Card game. That hit, combined with his storied past of on-the-field indiscretions is what got him superseded as he was viewed as being a multiple offender. Now that he has had two more incidents in just one game, the league should suspend him again.