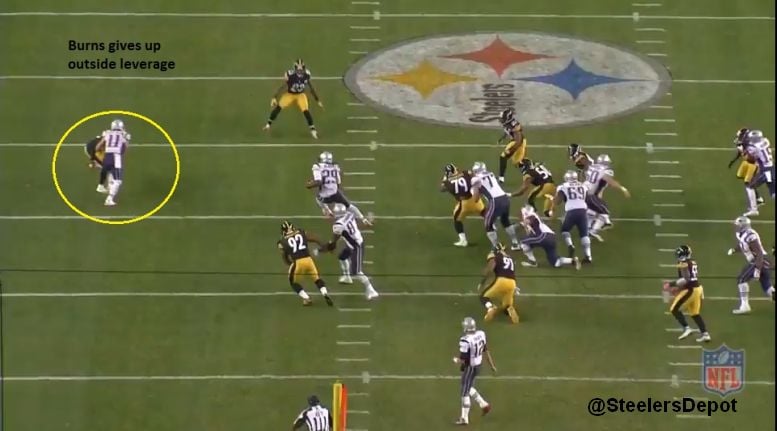 Sunday’s loss to the New England Patriots might have been frustrating for a large contingent of Steelers Nation, but for the first time in a few weeks the Pittsburgh Steelers defense did a solid job of tackling the catch and limiting the big plays by not missing many open field tackles.

I know, I’m probably reaching here, but after the debacle that was the Miami Dolphins loss, the Steelers bounced back in a big way in the tackling department against the Patriots.

The eight missed tackles aren’t overly bad when looking at them just based on the sheer number of them, considering some awful weeks that the Steelers have had in that department, but against the Patriots the biggest thing with the missed tackles was when they occurred, which largely came in the second half on both New England touchdown drives to really salt the game away.

We’ll pick things up in the third quarter with the Steelers trailing 14-13 following Pittsburgh’s scoring drive to start the second half.

At the snap, Ryan Shazier does a great job of reading the play and then filling the hole where LeGarrette Blount is designed to go. He just forgets to do one thing:  bring his feet with him.

As you can see in the GIF above, Shazier comes flying in, yet ends up diving at Blount’s ankles, allowing the big running back a free lane into the second level. Due to the miss by Shazier, that puts more responsibility onto guys like Stephon Tuitt, who does a solid job of getting back into the play, but he alone can’t bring Blount down with an arm tackle.

Two missed tackles on the play leads to an 11-yard gain for Blount on the ground.

Which then leads us to…

Shazier really whiffs on his decision to shoot one way, leaving a gaping hole off left tackle for Blount, who makes Artie Burns look silly in the open field towards the end of the run.

The major concern with Burns is that he’s not physical whatsoever in the running game, and you can see in the GIF that he gets manhandled by Julian Edelman, who does a great job of getting a hat on Burns to give Blount tons of room outside.

Although Burns’ miss results in just a few extra yards, it was the effort that has me concerned regarding his style of play.

Three plays later New England scored to go up 20-13, which then leads us to the decisive drive of the game of the game after Pittsburgh got to within 20-16 and desperately needed a stop.

As I said in my grades piece following the game, I hated the design by Keith Butler to stick Lawrence Timmons on Edelman in the slot throughout the game. Although Timmons did a good job of tackling Edelman after the catch and limiting big plays through YAC, this one really hurt and set the tone for the decisive drive.

It’s not a terrible miss by Timmons because he’s already a few steps behind in coverage, but it does allow the Pats to move the chains and really gain momentum on the drive.

Following a big run by Blount that Burns whiffed on and a big throw-and-catch between Tom Brady and Rob Gronkowski, New England was on the doorstep.

On Blount’s 5-yard touchdown run, William Gay is essentially left on an island to try and bring down the big, bruising running back in the open field. That’s a tough task to ask, but the effort by the veteran corner is maddening.

I get that the chances of Gay stopping a back like Blount by himself near the goal line are slim, but I don’t think asking Gay for a better effort here is too much.

Gay has long been known as the most physical corner on the roster (for what that’s worth), but he didn’t show it here.

Worth noting too in this piece is the fact that the Steelers have had a real problem bringing down big, physical running backs the last two weeks in Jay Ajayi and Blount. Maybe it has something to do with not having Cameron Heyward in the lineup, but it’s exceptionally concerning when you look at the schedule coming up and see guys like Terrance West and Ezekiel Elliott on the docket the next two weeks.