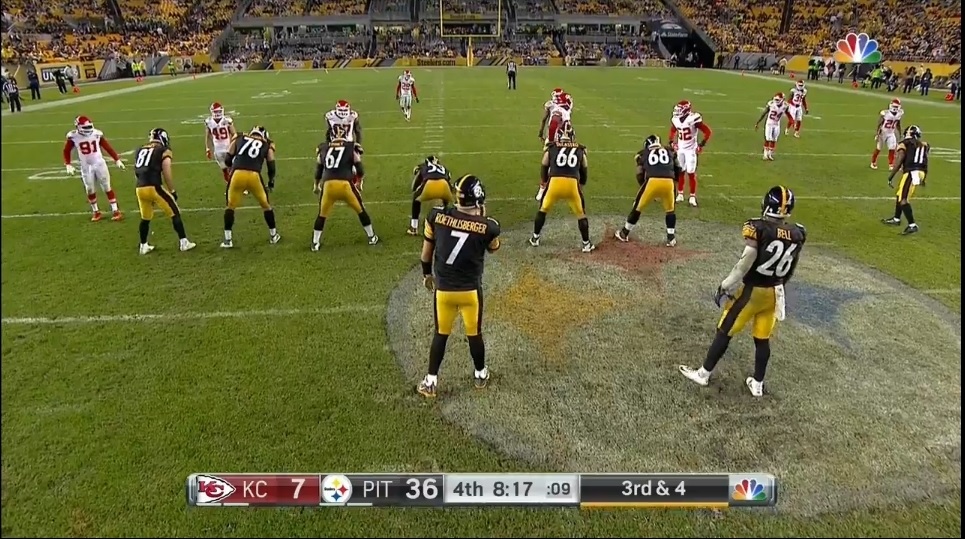 Le’Veon Bell made his return to the field last night and had a tremendous game, as Matthew Marczi pointed out immediately following the teams’ monster win over the Kansas City Chiefs.

But his return wasn’t immediately to the backfield. It was all over Heinz Field. In the slot, out wide, as a wing. That alone earned praise from several within the organization.

“I thought he really stepped up,” Ben Roethlisberger said via Steelers.com after the win. “Not just for this game but this week in practice. We asked him to do a lot. Not just be a running back and run the ball. Put him in motions, put him at wide receiver, we threw screens to him. We did a lot. That’s the confidence and faith we have in him.”

Bell ended the day with 144 yards on the ground and 34 through the air. His five receptions were the second most on the Steelers. Roethlisberger even said he felt like Bell could’ve been more involved as a receiver.

“He’s a weapon wherever we put him. And so we wanted to move him around and do different stuff. I thought we could have even used him more in the passing game. We had some more things in the playbook. But other things were working too.”

Bell was targeted three times as a receiver, catching two of them, before getting his first handoff in the backfield which didn’t come until the first quarter was almost over. By the end of the quarter, he had just one carry but would wind up seeing 12 in the second half, capped by his 44 yard run that would set up a DeAngelo Williams’ score.

Their head coach agreed Bell rose to the challenge.

“Le’Veon is one of the best in the world at what he does,” Mike Tomlin said after the game. “His presence is always significant because he does so many things well. Whether that’s running, or receiving out of the backfield, or aligning out of the backfield. We challenged him intellectually this week and he delivered. He moved around a lot, played some receiver in our two running back sets with DeAngelo. He did the job tonight.”

That versatility will serve well next week against a stout New York Jets’ front that came into this week ranked third in run defense and allowed just 66 total yards rushing to the Seattle Seahawks on Sunday. One game in and Bell has already shown he’s near impossible to match up against.