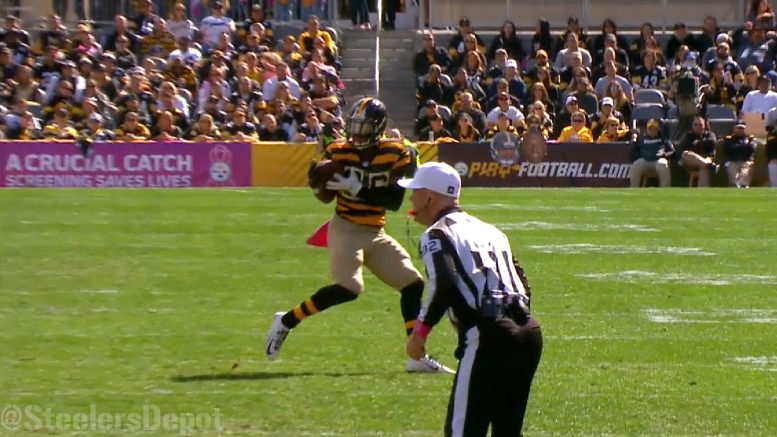 I’m not sure if you have noticed, or really paid much attention, given everything that has been going on with the Pittsburgh Steelers over the course of the past few weeks, but the reception rate that running back Le’Veon Bell is at is actually kind of ridiculous for his position.

He has only been back on the field for four games, but he has already compiled 30 receptions, which is an average of 7.5 receptions per game. He has already established new career-highs for receptions twice this season, first with a nine-reception game, and now coming off his first double-digit reception game in the loss to the Patriots.

If we actually took that reception rate per game and prorated it over a full season, however, Bell would actually be looking at a 120-reception season. Did I mention that there have been only 11 120-reception seasons in NFL history? And that six of them have occurred since 2009?

The single-season reception record for a running back is also a recent one, set by current Jet Matt Forte, who caught 102 passes in 2014. That was the same year in which Bell shattered the Steelers’ own franchise records for running back productivity as a receiver with 83 receptions for 854 yards. Forte gained 808 yards that season.

For the moment, Bell is still averaging a very healthy 8.2 yards per reception, picking up 245 yards on his 30 receptions, which is an average of just over 61 yards through the air per game, and over the course of 13 games would put him just under 800 yards.

Over a 16-game season, that would get him to 980 yards, not far off the mark that many have been envisioning for him over the course of the past three seasons, seeing him as the next player who will be able to hit the 1000-yard mark both on the ground and in the air in the same season, something that only a couple of players have ever done in league history.

Even though the 2014 season was an excellent one for him as a receiver, he is demonstrating this year that he can be an even more instrumental part of the receiving process than he had been when he was an All-Pro, which is a bit of an eye opener to consider.

Bell is already second on the team in receptions, behind, of course, Antonio Brown, who has 48. Jesse James and Sammie Coates are the only other players on the roster within 15 receptions of him, and Coates is the only player other than Brown who has more receiving yardage. His receptions per game is even higher than Brown’s, and he has a catch rate above 80 percent.