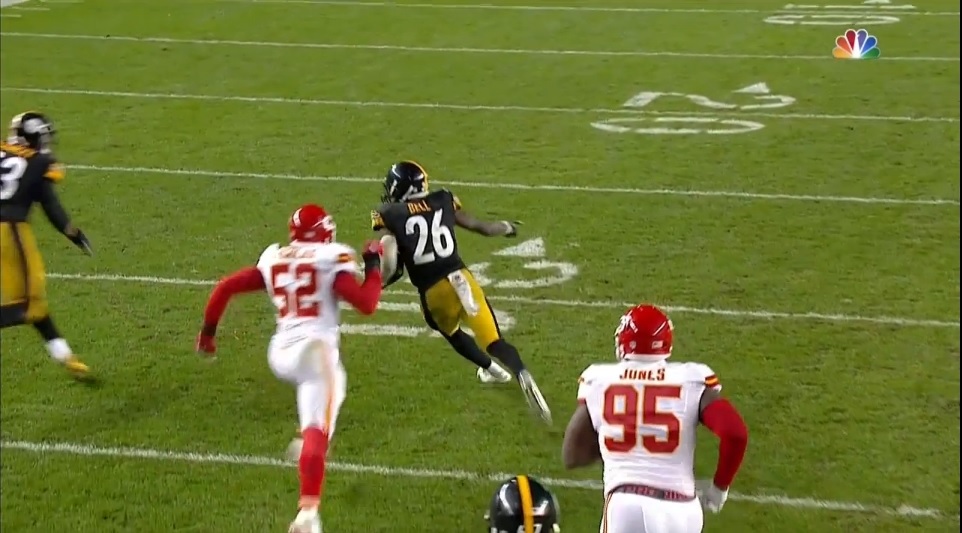 The Pittsburgh Steelers received running back Le’Veon Bell back last night, and he rewarded their patience through his off-field issues with a stellar debut to the 2016 season. He totaled 178 yards on the night, which accounted for nearly 41 percent of the team’s total offensive output, which amounted to 436 yards.

And he produced that on just 23 total touches, with 18 carries and five receptions. Through the air, he mustered just 34 yards as he had few opportunities to get out into open space, in spite of the fact that the team routinely lined him up in the slot or out wide as a wide receiver.

The bulk of his damage came on the ground, where he picked up 144 yards on just 18 carries. He picked up 44 of those yards on his final carry on the Steelers’ penultimate drive, which happened to come on a third-and-four play. Pittsburgh was on the Chiefs’ 46-yard line at that point, and he set them up with a first and goal from the two.

While he did not score a touchdown in his first game back, he did set up his running back, DeAngelo Williams, for the two-yard touchdown that followed his 44-yard run two plays later. It was Williams’ third rushing touchdown of the season, and his fourth total.

What is striking is that Bell had only 40 yards at halftime, with 25 yards rushing and 15 yards through the air, so he picked up over 100 yards in the second half alone. That has not been an uncommon theme in his career, as his endurance often carries him past the point of endurance that the linebackers who have to tackle him can match.

Of course, the Steelers were able to take advantage of a balanced offense, with Ben Roethlisberger throwing for 300 yards on the day, not to mention five touchdown passes, for a perfect passer rating. In fact, it was the team’s ability to build up an insurmountable lead early in the game that allowed them to turn to Bell to close things out.

It certainly appeared as though Bell was no worse for wear after being forced to sit out the first three games of the season due to a suspension. Head coach Mike Tomlin warned reporters during his weekly press conference that they should expect to see him early and often, and he made good on that threat, as his All-Pro back accounted for 23 touches, while Williams had just five total touches during the game.

Things are certainly looking up not only for Bell personally, but for the Steelers offense, which certainly looked its most fluid of the season, and there is no doubt that their All-Pro back had a lot to do with it. Bell is the straw that stirs the Steelers’ drink on offense, and he made sure that everybody knew in prime time that he is back.