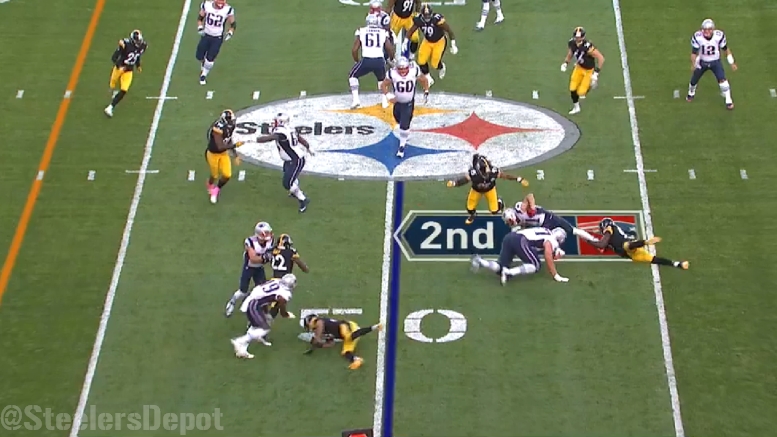 Many people within the community of Pittsburgh Steelers faithful seem more than ready to see inside linebacker Lawrence Timmons play his last down after showing signs of wear and tear and slowing down over the course of the past couple of seasons. He is an ‘old’ 30 years of age, in his 10th season in the game, and is on the final year of his contract, while the team has control of three other inside linebackers for at least the next two seasons.

But ‘old’ man Timmons still gets his snaps and finds his ways to make an impact, and yesterday he led the team with a season-high 11 tackles against the Patriots. Somewhat interestingly as a sort of trivia, all but one of his tackles were of either running back LeGarrette Blount or wide receiver Julian Edelman.

Timmons’ coverage duties meant that he was called upon to play a big role in terms of trying to contain the Patriots’ potentially deadly slot receiver, who had his way a bit with the Steelers’ secondary just last season.

Yesterday, however, while he did manage to catch nine passes—and it should be noted that he dropped a key third-down pass that would have left him with some room to run—he was held to just 60 yards on those nine receptions, which results in a pretty poor yards per reception average, and in fact his longest reception of the evening was just 11 yards.

Timmons’ first tackle of the day consisted of blowing up a screen pass for Edelman, managing to get to him in time to make the tackle behind the line of scrimmage, tripping up the receiver by the ankles for a loss of two yards.

He had two more tackles on that drive, but on the tail end of a nine-yard carry by Blount off the right edge of the offensive line. The other tackle came a play ahead of a touchdown, when Timmons picked up Edelman on a crossing route over the middle and held him to six yards on a second and nine.

The following drive began with a three-play sequence in which he was hit for gains of nine and 11 yards by Edelman and sandwiched in between made the tackle on Blount after a nine-yard gain up the middle on second and one.

It may not sound all that great, but for as bad as the defense played in some aspects, Timmons did his part in making sure that it didn’t get much worse. He cleaned up a lot of tackles down the field that others weren’t getting to, and all in all, he limited Edelman’s impact.

Perhaps this won’t be a popular opinion, but on a day in which the defense was obviously not up to par, Timmons was easily one of the better players on a unit that got taken to the cleaner’s in the running game for using their nickel defense so frequently.