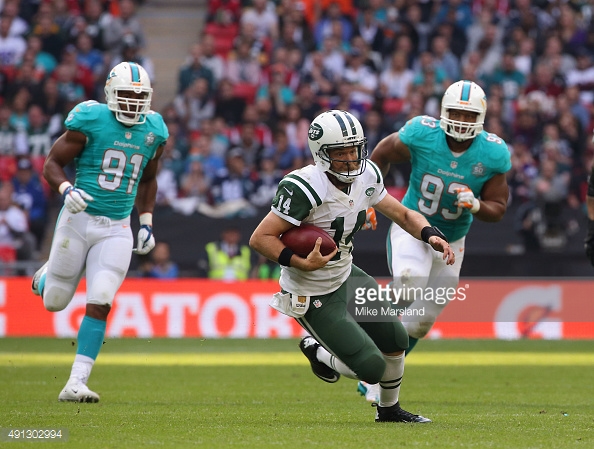 Coming off the excitement of yesterday’s win but like the rest of the team, we’re prepping to move on to Week 5’s matchup against the New York Jets. A struggling, to put it mildly, Jets’ squad. That starts with quarterback Ryan Fitzpatrick. His past two performances have led fans to wonder if the team will bench him.

Head coach Todd Bowles was asked about his quarterback’s security and shot down the idea, per Newsday’s Kimberly A. Martin.

Fitzpatrick has tossed nine interceptions over the last two weeks and ten for the entire season, leading the league. His interception rate is 6.5%, an astronomically high number and if it were to remain that high, it’d be the NFL’s biggest single-season mark since Gus Frerotte in 2007, per Pro Football Reference.

Perhaps they’d be more likely to pull Fitzpatrick if their backup situation was better. The Jets’ #2 is Geno Smith, someone the team has clearly soured on and played poorly in his last serious chance, leading them to a 3-10 record in 13 starts back in 2014. In his career, he’s thrown eight more interceptions than touchdowns with a completion percentage below 58.

On paper, it’s a great matchup and opportunity for the Steelers. Fitzpatrick has been erratic and the Jets’ injury report is starting to look scary. Eric Decker missed last week with a tear in his shoulder, meaning he’ll unlikely be at full health the rest of the season, and Matt Forte had to get X-Rays following the loss to the Seattle Seahawks. Right tackle Brian Winters left the game with a concussion, too, and even before then, they were using a committee at the position with he and Ben Ijalana.

The Steelers’ secondary is still without an interception but if the front seven can get pressure the way they did last night, they’ll be in position to snag their first – and hopefully another win – against Fitzpatrick.