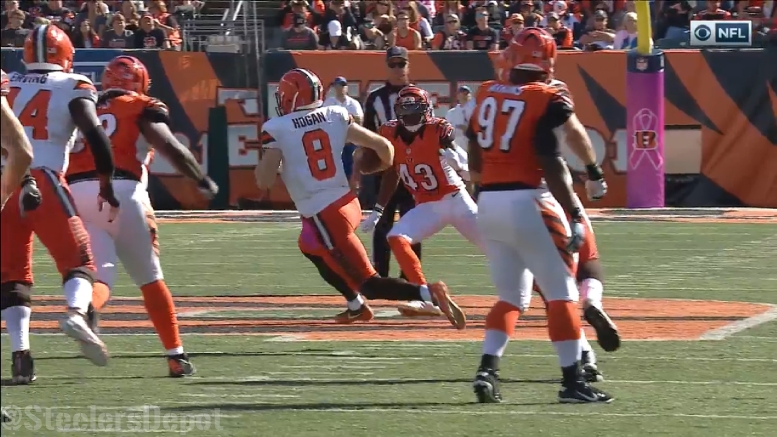 Yeah, this is going to be yet another article that begins with some variation of the notion that the Cleveland Browns are the Rodney Dangerfields of injuries and bad breaks this year, because it keeps being true. And when you get off to an 0-7 start to your season, that probably isn’t as realistic as it might seem on the surface.

As mentioned, the Browns have played seven games now. In almost all of them, their quarterback has gotten injured, and often enough to knock them out for weeks. They lost Robert Griffin III in the season opener and still haven’t gotten him back after placing him on injured reserve.

They lost Josh McCown in the second game of the season and they still haven’t gotten him back either, although he did return to practice. After him, they turned to rookie third-round pick Cody Kessler, who has now  gotten injured and had to leave the game twice after he suffered a concussion yesterday in Cleveland’s two touchdown loss to the Bengals.

The first time around, the Browns brought in veteran Charlie Whitehurst to play as Kessler’s backup, but he, too, got injured in that game, and he is now off the team after receiving an injury settlement. Since then, Kessler’s backup has been another rookie, Kevin Hogan, whom they claimed off waivers and was on the practice squad for half the season.

But after Kessler left yesterday’s game in the second half, Hogan all of a sudden was thrust into action, becoming the sixth different player to play quarterback for the Browns this season through seven games, a number that includes former quarterback turned wide receiver Terrelle Pryor, who has thrown several passes this year.

One thing that Hogan did show is that he has some wheels. In fact, he ran for 104 yards on seven runs, including a very impressive scramble for a 28-yard touchdown. But in spite of Hogan’s heroics with his legs, the rest of his game left much to be desired.

The rookie completed 12 of 24 passes for 100 yards and two interceptions, and generally looked as though he was not ready to see that sort of action, which should certainly not be surprise. You can bet that the Browns are hoping McCown is ready to return if Kessler has lingering concussion issues.

But Cleveland was actually using Hogan before Kessler left the game. On the first play of the drive on which Kessler suffered a concussion, Hogan checked in at quarterback for the first play and faked the handoff to run it up the gut for 15 yards. Kessler checked back in for one play, then Hogan came back in and ran around right end for another 15 yards.

It is getting to the point at which it almost seems as though the Browns will simply by the standard odds of chance stumble upon a win or a bit of good news on the health front, given how poorly the first half of their first season under the latest regime has gone.