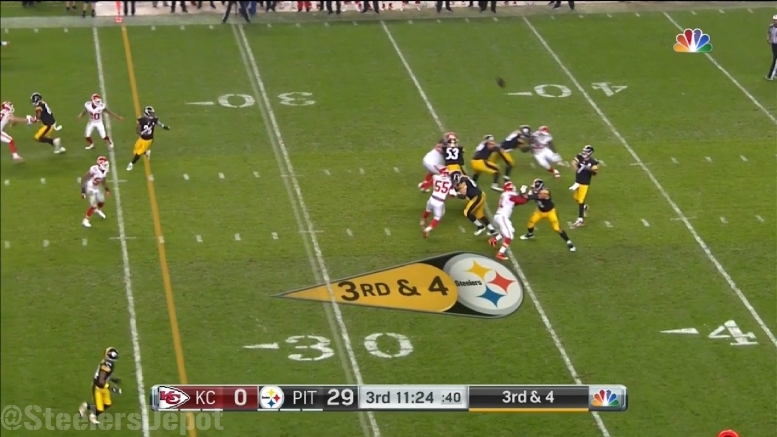 Usually, when Roethlisberger is limited to just his five core targets—his top three wide receivers, his tight end, and his running back—that is typically indicative of the fact that he is either uncomfortable or he is struggling, whether it is due to having limited time under pressure, or simply having an off day.

The first game of the season was an exception, when he only targeted five different players but still played well overall, but he has expanded his targets since then, and last night, he was able to hit at least one pass to nine different offensive skill position players.

That was at least one pass for every single skill position player who dressed for the game, short of third-string running back Fitzgerald Toussaint, who I believe did not receive a single snap on the offensive side of the ball.

Everybody else who was dressed, however, not only got into the game, but produced, including all four wide receivers, all three tight ends, and the team’s top two running backs. And this distribution came on just 22 completed passes and only 27 total pass attempts over the course of the game.

Interestingly, second-year wide receiver Sammie Coates led the team not only in receptions but in targets, as he hauled in six of the eight passes tossed in his direction. Running back Le’Veon Bell also caught five passes in his first game back, while Antonio Brown caught four passes, two of which ended up in the end zone.

Tight end Jesse James caught two passes on the night, including a nice nine-yard touchdown pass—his second of the season—on a corner fade route in the red zone, with a defender in tight coverage. Five other players caught at least one pass.

In the cases of wide receivers Darrius Heyward-Bey and Markus Wheaton, their lone receptions of the day were nothing to set aside, as each player caught a touchdown pass of at least 30 yards. Heyward-Bey’s was the first score of the game from 31 yards out, while Wheaton’s from 30 yards opened up a 36-0 lead in the third quarter.

Even Xavier Grimble and David Johnson had highly productive single-reception showings, as Grimble’s one catch went for 19 yards, and Johnson’ picked up 24. Only DeAngelo Williams’ lone two-yard reception seems less impressive, but he picked up a rushing touchdown by the end of the night.

This is generally what the offense looks like in terms of distribution when Roethlisberger and his weapons are humming on all cylinders. And if they weren’t doing just that last night, then they certainly were not too far from it.