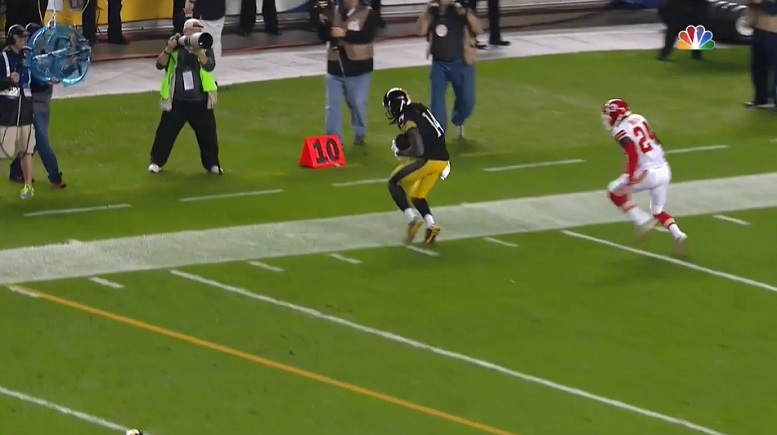 While the 6 catches for 79 yards that Pittsburgh Steelers wide receiver Sammie Coates had Sunday night in the win over the Kansas City Chiefs was great to see in the gamebook, his performance in that contest highlighted the fact that he has the ability to be more than just deep pass catcher.

During his Tuesday press conference, Steelers head coach Mike Tomlin made sure to point out how Coates is starting to become a more well-rounded wide receiver after the first four games of the 2016 regular season.

“Sammie Coates got his first start at receiver and showed some things other than just being a deep ball guy,” said Tomlin of the team’s former third-round draft pick out of Auburn. “I think we’ve all seen consistency from him in that area through the regular season and preseason, but were starting to see consistencies in other areas. The rounding out of his game and he took advantage of that opportunity to start to display some of those things.”

During his weekly interview on Steelers Nation Radio, offensive coordinator Todd Haley also talked about Coates and how he’s progressing as a wide receiver

“I think when you’re getting more plays and he’s gaining confidence, he’s not just running routes, so to speak. We’ll say running paper routes, where you see the drawing and you know in a broad sense what you have, but there are so many finer details to it,” said Haley. “He’s not just running the paper routes; he’s starting to really fine-tune what he’s doing. That’s giving the quarterback confidence. It’s giving him confidence and so then he is playing faster and more decisively.”

Of the 13 receptions and 282 yards receiving that Coates has registered so far this season 5 of those have been for 40 yards or more and he currently leads the NFL in that statistical category. While a few of his other receptions have come courtesy of screens, he had a few intermediate key receptions Sunday night against the Chiefs and both moved the chains.

As Coates continues his progression as a second-year NFL wide receiver, his teammate Darrius Heyward-Bey said earlier in the week that he wants to start seeing him do something he’s yet to do so far during his career.

So does Coates have the potential to start becoming a scoring player?

“Definitely has that kind of potential,” said Heyward-Bey. I mean look at him, he’s 6-3, 225, I mean he definitely has it in him and his confidence is building each and every week.”

This coming Sunday in the Steelers home game against the New York Jets, Coates and the rest of the Pittsburgh offense will face a defense that has struggled so far this season when it comes to defending the pass. When you add in the fact that Jets cornerback Darrelle Revis might not play Sunday due to a hamstring injury, the Steelers wide receivers could wind up having a big game and most notable Coates, as you can bet the New York defense will be focusing mainly on trying to shut down Pittsburgh wide receiver Antonio Brown.

In short, Coates could wind up having his most complete game to date Sunday at Heinz Field complete with his first touchdown reception.