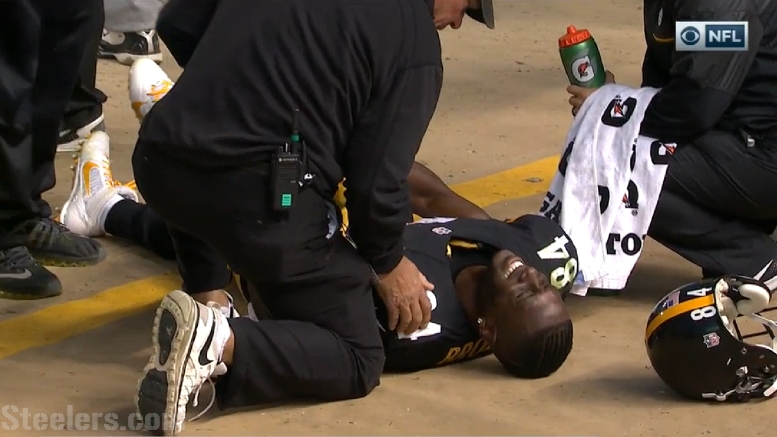 For the first 40 minutes of the game, Pittsburgh Steelers wide receiver Antonio Brown was a ubiquitous presence on the field, as he is routinely. It is rare that the All-Pro talent ever comes off the field for the Steelers’ offense outside of extraneous circumstances, such as in the victory formation.

By that point in the game, Brown had logged 43 consecutive snaps, and was likely well on his way, yet again, to playing every snap of the game for Pittsburgh. But then he sat down for nine straight snaps, returning for the final two plays of that drive. He then sat out the first two snaps of a three-play drive before returning for the third-down play, and his participation remained sporadic after that.

It was a short time before he began missing snaps that he took a blow to his lower body that caused him pain throughout the remainder of the game. I’m not sure if the exact play has ever been identified, but it may have been the final play of the previous drive, on which he appeared to bang legs with the cornerback.

Brown missed about half of the team’s snaps after he first came off of the field, somewhere around 35 snaps or so in total. And it certainly bothered him as he came back in and out of the game, though he did manage to catch one pass on three targets after the injury for seven yards.

The good news is that Brown told ESPN’s Jeremy Fowler that he is “getting better”, and that he expects to be healthy enough to play when the Steelers take on the Ravens, with both division rivals coming off of bye weeks and nursing losing streaks that they are desperately hoping to get rid of.

Brown described the injury as a “little hip pointer”, and that would certainly be consistent with what I saw on the aforementioned play, as well as his initial reaction to the injury when he came off the field and was lain on the ground with the medical staff looking at his left side and lower body.

Whether or not Brown will be receiving his targets from quarterback Ben Roethlisberger is a bit more up in the air, as reports about the veteran’s recovery from a meniscus operation have been somewhat erratic. One report yesterday suggested he may be a game or two away from returning, but he has said that he plans to practice this week, so that is the current goal post.

Should Landry Jones have to play, at the very least Brown should not be hurting for opportunities. He led all players with 11 targets, catching seven passes for over 100 yards. In both of the games that Jones has started and finished, Brown has been individually productive.

Of course, he wasn’t trying to play through a hip pointer. It remains to be seen how that injury might affect his ability to elude defensive backs in coverage if he is able to play on Sunday.