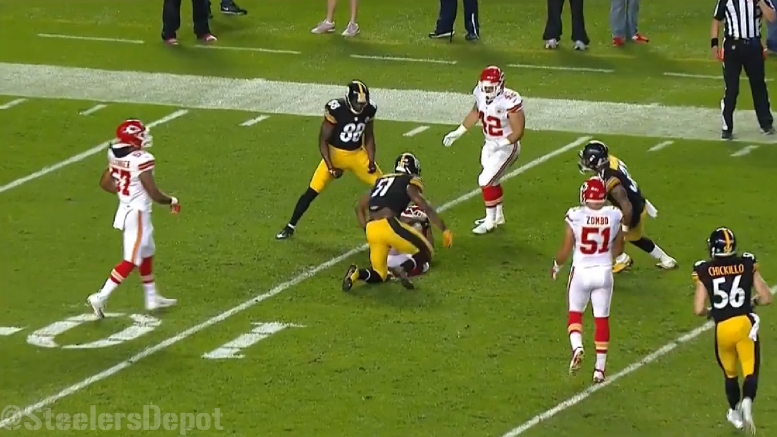 Due to a massive number of injuries, fifth-year inside linebacker Steven Johnson—basically the sixth man on the depth chart—got his first game day helmet of the season, and he made the most of it by putting in some quality time on special teams, which is precisely the reason he was signed in the first place, and the reason he made the team.

In fact, he even managed to make a special teams tackle on the Pittsburgh Steelers’ first kickoff of the game, which the Chiefs attempted to return from five yards deep in the end zone. Johnson cut through the traffic the make a strong tackle on the returner, bringing him down at the 12-yard line, which helped to set a tone for the team’s coverage units on the day.

In fact, Johnson did a lot of the dirty work for the Steelers on special teams. On the kick coverage units, he was the man to the right of the kicker, drawing the responsibility of taking on the return team’s wedge. He lined up over the middle on the punt return unit as well, tasked with slowing down the coverage team’s central blockers.

Overall, it was a good first showing for the free agent signing, who demonstrated roughly what the Steelers probably expected that they would get out of him when they looked at him in free agency as a replacement for some of the pieces that they had themselves lost to signing by other teams back in March.

According to Chris Adamski on Twitter, it even merited a visit from Mike Tomlin in the locker room, who told the veteran to keep working and he will “earn a (regular) hat”. Now, many probably assumed that he was going to be in line for a regular hat anyway as the fifth inside linebacker and the one-for-one replacement for Terence Garvin.

But the Steelers chose to keep Tyler Matakevich on the 53-man roster initially and instead released Johnson in order to carry Bud Dupree on the roster long enough to put him on injured reserve with a return designation. Given that Johnson was a veteran, he would not have been subject to waivers, making him the logical cut for logistical purposes.

But then Matakevich got the hat on game day for the first three weeks, and played on special teams. He was credited for an assisted tackle on special teams on Sunday, though I would argue whether or not it was merited.

The Steelers will still have a laundry list of inactives due to injuries tomorrow, which means that Johnson will probably get another helmet. If he continues to perform when he gets the opportunity, who knows, he may move up on the depth chart, at least in terms of dressing.

Not that that is what seemingly anybody wants. Everybody is pulling for Matakevich, of course. But Johnson played to his tasks well, and we know from his past that he can take on more special teams assignments. It just leads me to wonder if he and the rookie may not find themselves competing to dress on game days in the near future.