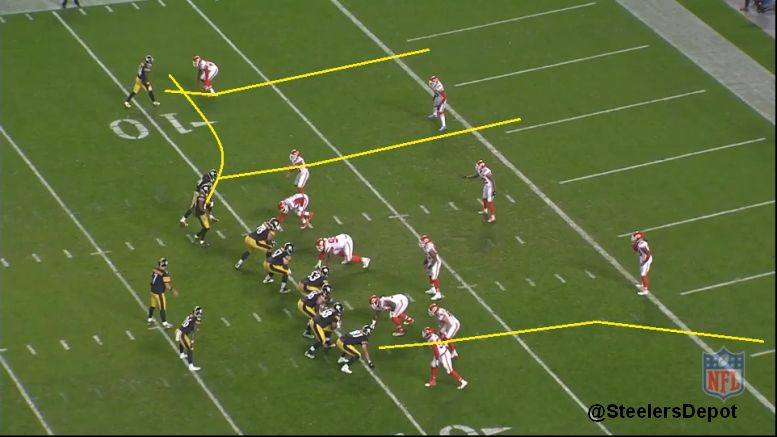 The NFL is a copycat league. You can bet the Kansas City Chiefs were trying to lean on concepts they saw the Philadelphia Eagles gash the Steelers with a week ago.

But it works both ways. And perhaps the Pittsburgh Steelers grabbed a couple of things the Eagles did to them, chucked it into their playbook, and beat the Chiefs with it.

The Steelers, like basically every team, perhaps sans New England, are a base 11 personnel team. Three receivers, one tight end, one running back. When the Steelers use their 11 personnel, they almost always line up with two receivers and a tight end to one side and a lone receiver to the backside. Like this. 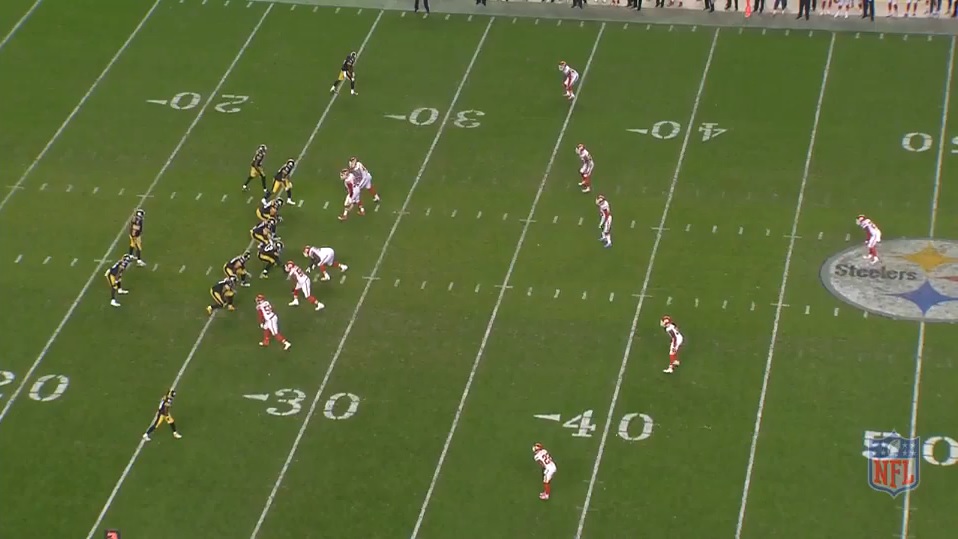 This isolates their best receiver, Antonio Brown, as the “X” receiver, forcing defenses into two choices.

1. Brown is isolated with just a cornerback, giving him a one-on-one matchup he’s almost certain to win
2. Declare and bracket him with a safety, limiting coverage variation and creating one-on-one matchups elsewhere

That’s what you’ll see 95% of the time. But twice Sunday night, for the first two times I can think of, Pittsburgh came out in a different look.

Verbiage will vary. You can call it Trips or Trey but it has the tight end isolated to the backside but attached to the formation with three receivers to the field.

It’s something the Eagles do a ton and hit their 73 yard touchdown to Darren Sproles – the game’s dagger – off of. Partially because Ross Cockrell drifted out of his zone because of the unfamiliar look. 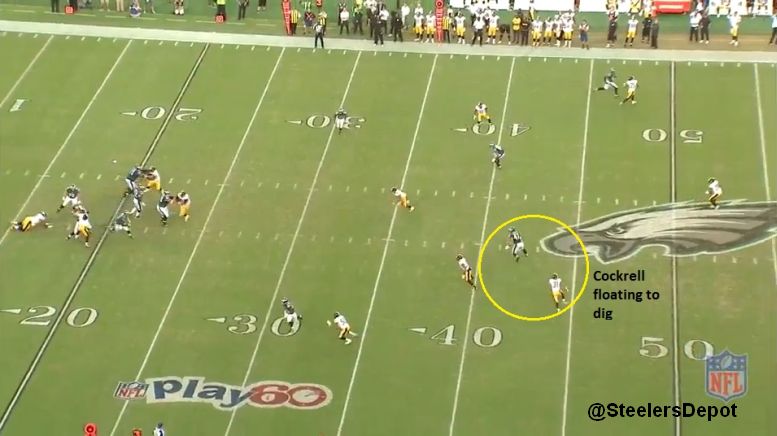 And both times I saw it, the Steelers found the end zone. Let’s look at both.

The first came on the Steelers’ first touchdown of the day, a wide open Darrius Heyward-Bey from 31 yards out. The pre-snap look. You can see Xavier Grimble attached to the formation to the backside. 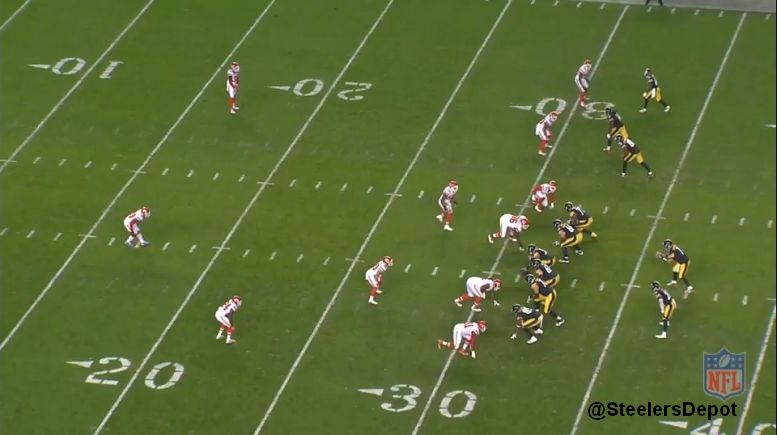 The Chiefs are in Cover 3 with rookie corner D.J. White to the bottom, the same side as Grimble. To the trips side, Heyward-Bey runs a deep crosser, cutting across the face of the single high safety. It’s a simple MFC/MFO read. If the midle of the field is closed, like in Cover 3, the break is sharper. If it’s open, like in Cover 2, the break is more narrow and upfield. 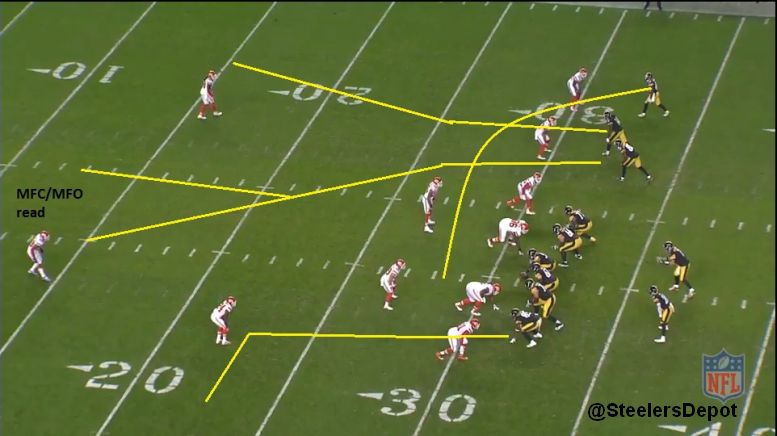 Grimble runs a ten yard out route, drawing in White, who should’ve been looking for crossers and getting depth. 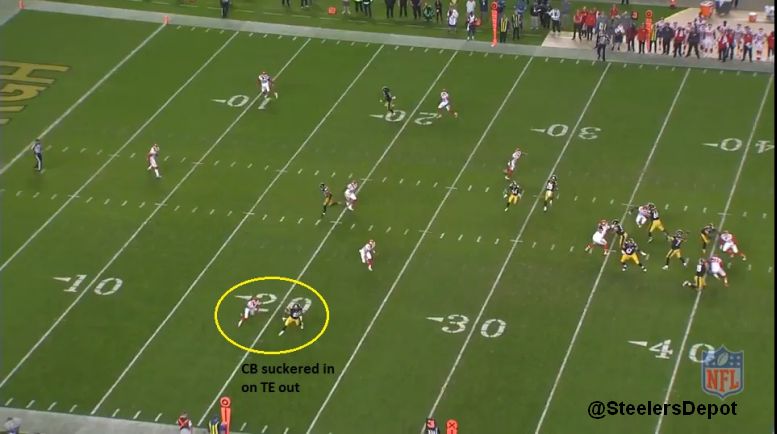 But he doesn’t and it opens up that deep third of the field for a wide open Heyward-Bey. Ben Roethlisberger hits him and the Steelers are on the board.

The second instance, Jesse James’ nine yard touchdown, may have been given a second look by the Eagles but rooted in the Dallas Cowboys’ playbook. Because it looks an awful like a play they had when Haley served as the passing game coordinator in 2006.

This is their Topper concept and part of their red zone package. Here, it’s shown with a two-back set, the fullback releasing into the flats.

Here, it’s slightly adjusted for the more modern NFL and its penchant for three receiver looks. Instead of the fullback releasing into the flats, it’s the #3 receiver Heyward-Bey.

To the frontside, the other two receivers will run vertically based on the cornerback’s leverage. In this sense, it is also similar to what Heyward-Bey did in the first example. His crosser is based on the coverage and because it was a single high safety (middle of field closed) he crossed his face and took a sharper angle.

To the backside, Jesse James runs a corner/flag route. The fact he’s attached gives him maximum space on his break without giving away the route by a reduced split, as a receiver might.

Individually, it’s a really impressive route by James. He’s matched up with safety/linebacker Daniel Sorensen. James is able to swim over and separate, get Sorensen in trail position and trying to catch up the entire way. 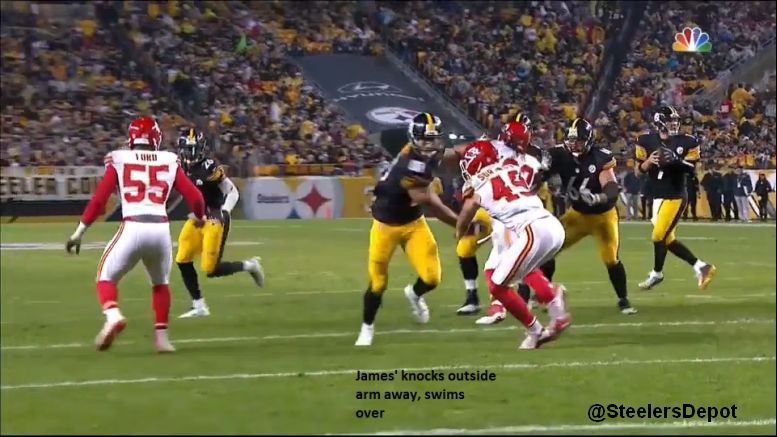 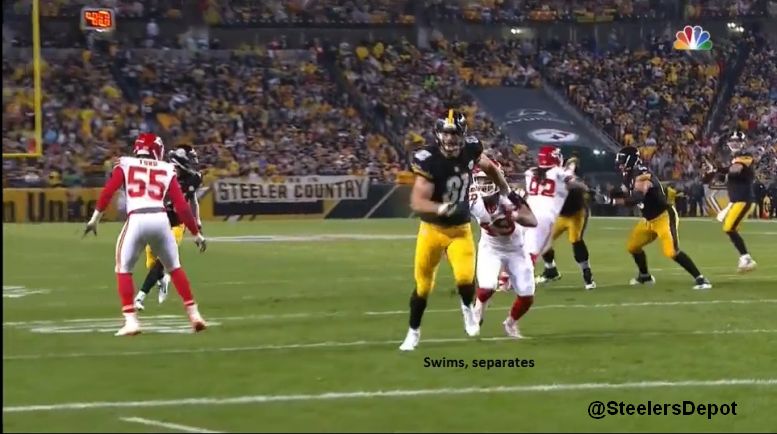 Roethlisberger makes the throw and James brings it in for the score to make it 29-0, effectively ending the game by halftime.

It’s another wrinkle Haley has busted out. The Steelers’ offense certainly gives you a lot of layers. And Sunday, with their pony backfield or two running backs and this, there’s a couple new elements for defenses to worry about.