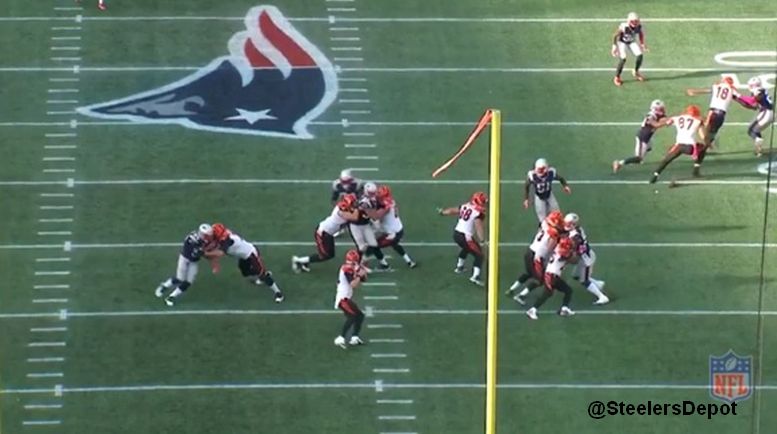 New England has 11 sacks this season, in the lower third of the league. But that comes from seven different players, so a lot of threats, and Jabaal Sheard leads the surge with 3.5. Five sacks are by defensive linemen and none come from the secondary.

Their run defense is solid. A 3.7 per carry average against, tied for 7th best in the league. They’ve only given up 11 runs of 10+ yards, tied for fifth in the league, and just a single run of 20+, one of five teams in the league to do so.

Alan Branch, #97 is their nose tackle and a load at a *listed* 350 pounds. He’s not only an occasionally-used player either, playing 78% of the snaps in last weeks’ win over the Bengals. Malcolm Brown (320), Vincent Valentine (320), and Woodrow Hamilton (315) are all mountains of men.

They’re a two-gapping front who like a black hole, just sucks up all the available light and space, and make running the ball between the tackles a tough living.

Those are the guys on the interior. On the ends, the Patriots run a base 4-3 but have a lot of three down fronts in sub-package, are Chris Long, Jabaal Sheard, and Trey Flowers. But those guys are all pretty much hybrid, versatile players, especially Shard, who can put his hand in the ground as often as he stands up.

Long and Flowers are generally the right ends, Long moves around a bit, and Flowers is often seen on third and long as a specialty pass rusher but doesn’t have a sack this year.

Rob Ninkovich is another one of those movable chess pieces and can play all over but I consider him more of a linebacker than I do a defensive linemen. Ditto with Jamie Collins, a supreme athlete who is questionable this week with a shoulder injury. He leads the team with two interceptions. Better hope he doesn’t play. Their Ryan Shazier, injury woes and all.

Inside is Dont’a Hightower, who continues to play good, steady ball. Rookie Elandon Roberts has gotten a lot of playing time the last two weeks and playing really well. Top notch athlete whose film study is paying off. Quick to diagnose against the run and in coverage. He wears #52.

Like so many teams, sub-packages are their base, using 5 DBs over 80% of the time this year, per Pats’ Pulpit’s Rich Hill.

Only one player in the front seven has played over 80% of the snaps this year. There are four in the secondary: Devin McCourty, Malcolm Butler, Patrick Chung, and Logan Ryan.

Again, versatility is their calling card. Butler can play outside or in the slot and will be tough for Antonio Brown to try and shake. McCourty is an extremely well-rounded free safety, and Chung can thrive in the box.

Generally, Butler is the left corner and Ryan the right.

They have allowed some big plays, allowing the 9th most passes of 20+ yards (20) and the 12th worst completion percentage at 64.9%.

Overall for this defense, their third down defense has struggled, ranking 6th worst with opponents converting 44.2% of the time.

That fifth and sixth DB has rotated throughout the season. Often times, Duron Harmon will go to safety with Chung rolling over to the slot if Butler is staying outside. In Week 5, UDFA Jonathan Jones (a favorite of mine) saw a bunch of playtime while last week, it was Eric Rowe. Rookie Cyrus Jones and Justin Coleman have also been in the mix.

On a lot of early downs, the Patriots are a zone team that will play a straight cover two or quarters coverage. 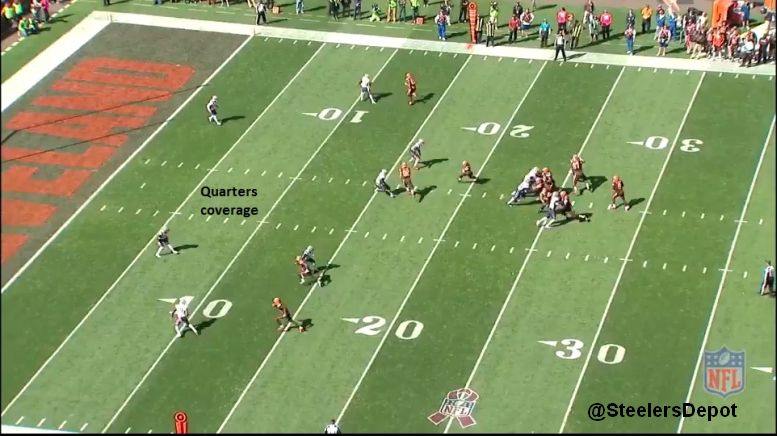 On third down, they go to a lot of man and press coverage. Disrupt timing, don’t allow free releases, all that good stuff. Cover 1 (man-free), and 2 Man (which has been killing the Steelers lately). 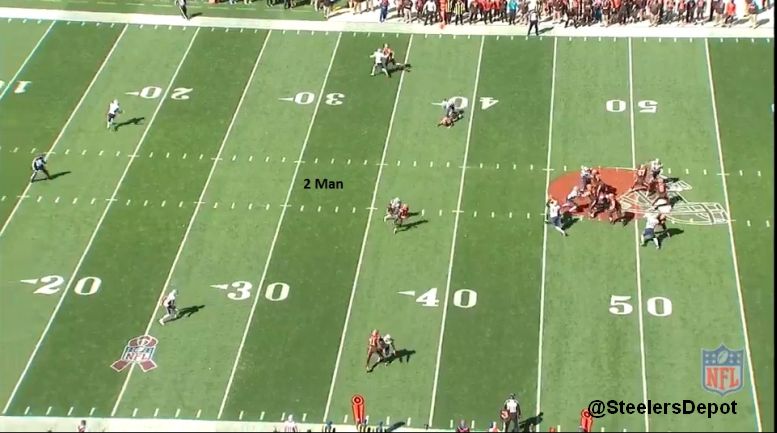 They, as Bill Belichick coached teams are wont to do, do their best to take away what you do best on an offense and your best weapons. Seen a lot of bracket looks on team’s best weapon to limit him. 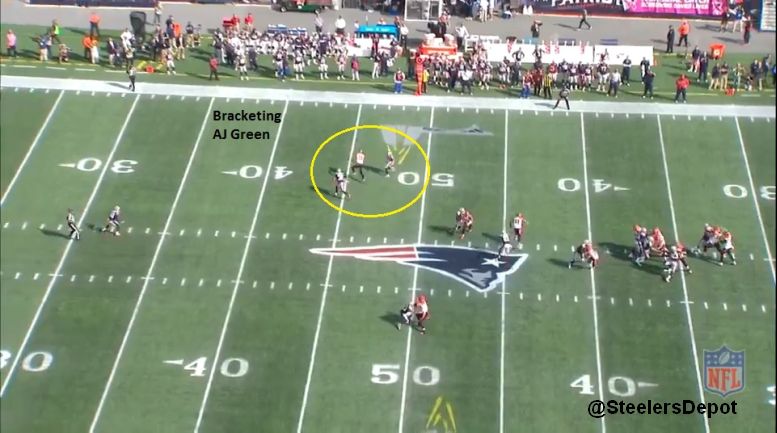 Jonathan Jones and Matthew Slater, one of the league’s top special teamers, are the gunners. DBs Brandon King and Jordan Richards are the wings. Nate Ebner, also a great special teamer (Rugby team Olympian), is the upback. He has eight tackles. Slater has three.

Barkevious Mingo leads them with 127 special teams snaps. Ebner is just a couple behind.

This week, the battered-and-bruised Pittsburgh Steelers host the New England Patriots. Although many fans aren’t expecting much with last week’s injury to Ben Roethlisberger, there still exists a flicker of hope in the hands of Landry Jones. You’ve already seen their offensive weapons, so let’s take a look at their defensive culprits.

The Patriots, like many teams, rarely implement a base defense anymore. The league is changing, and so defenses must evolve in order to avoid becoming obsolete and dated. That being said, their defensive line consists of Alan Branch and Malcom Brown. Both men usually ring the bell when called upon, and both are strictly utilized in the run game.

Both players are grading incredibly poorly against the pass, which isn’t a complete shocker give their usual assignments. Against the run, though, they flourish. Of the two, Brown is the standout; he’s registered 12 tackles behind the line of scrimmage thus far, and uses his 300+ lbs to move offensive linemen on a regular basis.

He did, however, register his best pass-rushing game last week against the Cincinnati Bengals, accumulating 2 quarterback hurries and 5 tackles, including 3 behind the line. With a [shockingly] struggling David DeCastro, let’s hope Todd Haley’s going to lean on quick passes all afternoon.

The edges are manned by two players who have proven to be potent when called upon- their stats echo a similar testament. Rob Ninkovich is essentially a Swiss army knife on the field, as he does a little bit of everything, but nothing spectacularly. After serving a four-game suspension to start the ’16 campaign, he’s done enough in his first two games of the season to raise a few eyebrows- more so against the run.

His pass rushing abilities have always been lacking, as he’s graded significantly below average in his last 4 seasons. He’s registered 7 tackles and 2 stops, and looks to add to that tally on Sunday.

His counterpart, Jabaal Sheard, is the pass-rushing specialist. He’s launched off the line to the start his ’16 campaign, already registering 4 sacks, and an astounding 18 quarterback hurries after six games- not too shabby. He leads the team in defensive snaps, as it’s clear the coaching staff doesn’t like to take him off the field very often; it’s easy to see why. Take a look below at his sack from last week. 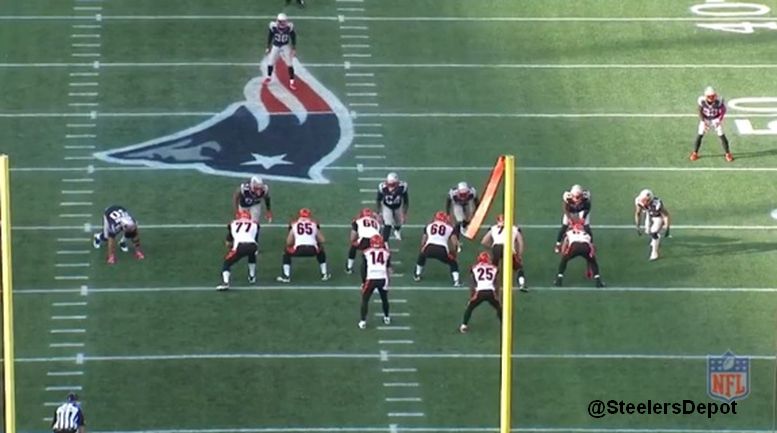 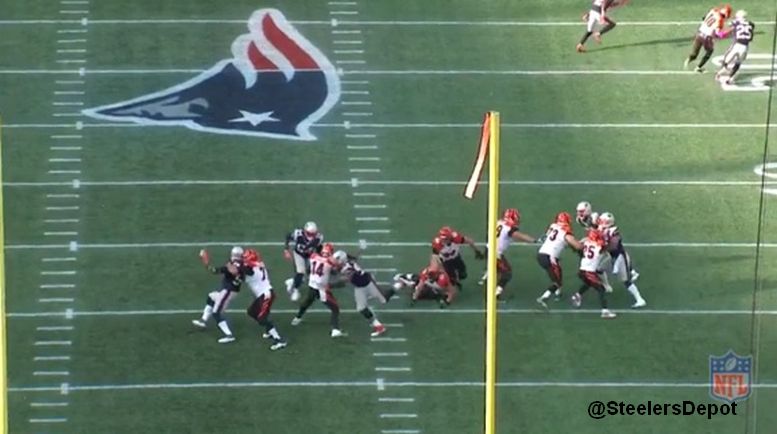 He starts over Bengals’ left tackle Andrew Whitworth, and stunts inside, eventually getting to guard Clint Boling. His speed was too much to handle, and he slips between the two would-be blockers with ease, and before the Bengals know it- Andy Dalton’s on the ground for an 8 yard loss.

Moving along we finally reach their linebackers, and boy, do they pack a punch. Their heart and soul is Alabama product ILB Dont’a Hightower. Rarely missing a bit, he really doesn’t even know what a negative grade looks like- he flourishes in both facets of the game, and even bats a few balls from time to time. He has 3 sacks (2 of which came last week against the aforementioned Bengals), to go along with 17 tackles and 11 stops. He’s got speed to match those instincts, that’s for sure- take a look at #54 below. 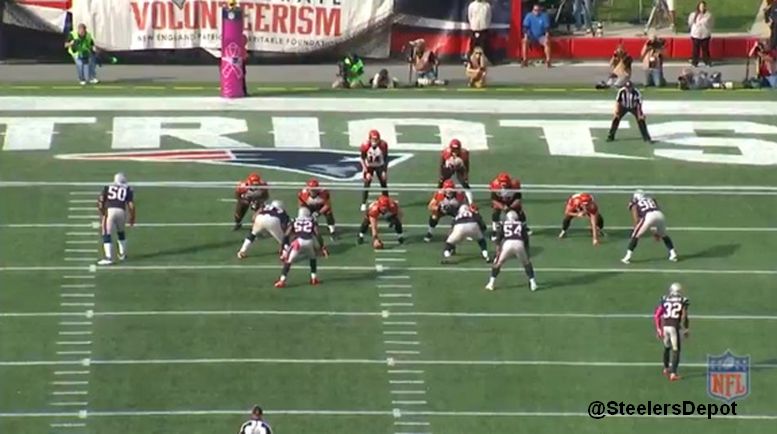 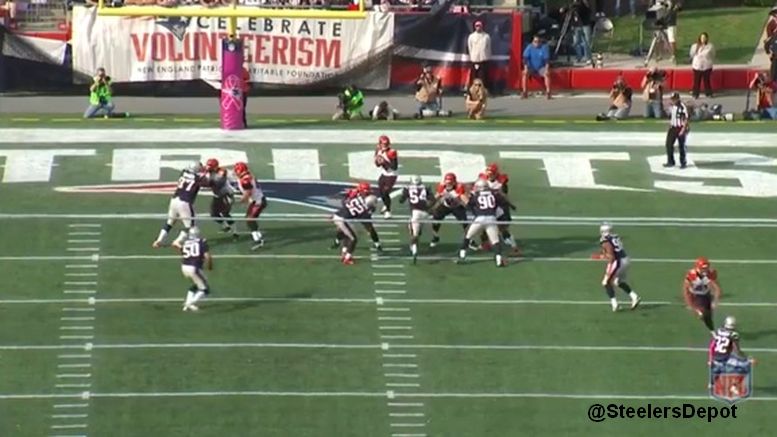 Before anyone can get into position, Hightower is barreling downhill, headed for Andy Dalton and the safety. The line has had its ups and downs this far into the season, but they’re going to have to be on their A game if they want to keep Jones upright.

He’s quite the combination, as he does everything that’s asked of him and more. Look for his number to flash across the screen all afternoon, as he’s up against his biggest test of the year against both the running and receiving Le’Veon Bell.

Jamie Collins and Elandon Roberts, both of which are incredibly powerful against the run, flank either side of Hightower. It’s easy to understand why the Patriots are second in the league against the run, when they have pieces to the puzzle such as these 3 studs.

Starting with Collins, we see a lanky, athletic linebacker who might as well wear a cape the way he regularly flies across the field. He instinctively uses his speed and agility to track down the ball carrier; he has 13 tackles behind the line of scrimmage to go with 31 tackles. His week 3 game against the Houston Texans was absolutely breath taking (and petrifying for Steelers fans) to watch. He racked up 13 tackles- 8 of which were behind the line of scrimmage! As Houston is struggling to find their passing attack, it’s easy to see similarities to the Landry-Jones-led Steelers offense- it could be a long afternoon.

Roberts, a 6th round selection in this year’s draft out of Houston, has been a nice addition to the linebacking corpse. When a player opposite of you is so dominant, it’s natural that teams target you often- that being said, he’s also held his own against both the run and pass. He’s an upgrade from rotational linebacker Shea McClellin, who struggles regularly in the pass rush and is mediocre at best against the run.

The secondary has a few standouts, but none garner more attention and Boston hometown love than Super Bowl hero Malcolm Butler. He’s an incredibly intelligent player, who has a perfect mix of physical ability and aggressive instincts. He had his best game last week against the Bengals (I feel like this is a trend), who allowed only 3 receptions on 7 targets for 17 yards and registered 4 batted balls! He did, however, allow a single touchdown to Brandon LaFell, so he is in fact human and can be beat.

Opposite Butler is Logan Ryan, who had a relatively mediocre game last week. He allowed 2 receptions on 4 targets for 52 yards; he would be the best target to roll the dice on a few splash plays to Sammie Coates.

The safeties are ying-and-yang, as Devin McCourty is their best coverage defensive back, while Patrick Chung is quite the opposite. McCourty is regularly flying around the field, as he was targeted twice and allowed a lone reception for 6 yards. He plays his assignment perfectly, eating portions of the field as he does so often.

Chung, however, was targeted 4 times last week, and allowed a 100% completion rate for 62 yards.  He can sometimes become confused in coverage, picking the wrong receiver to attack leaving holes in coverage. He’s a wildcard, an up-and-down player, and you never quite know who will show up on Sunday.