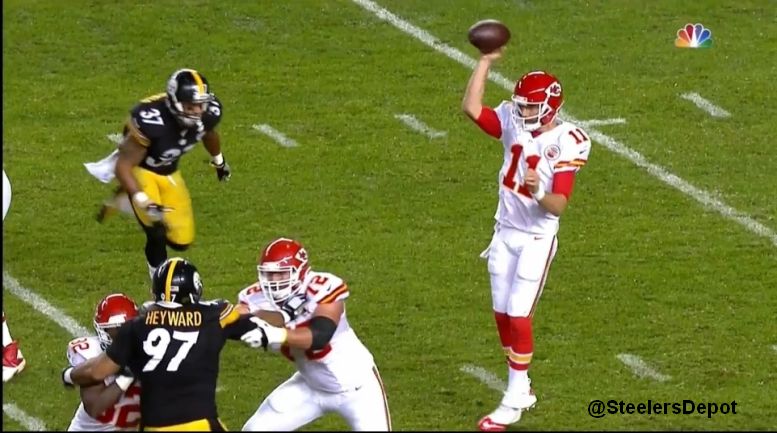 For a week, the concerns over the Pittsburgh Steelers’ pass rush will be quelled. It doesn’t mean they’re solved, and long-term, but it was clear Keith Butler made some adjustments to go from a lone sack in three weeks to four in last night’s win.

The solution was a combination of things; scheme adjustments, game circumstances, and players flat out winning their matchups, We’ll focus on the scheme element predominantly seen in the first half before the game was out of reach.

Butler was able to marry blitzes without running an actual fire zone, or sending five guys. It is truly “safe pressure,” creatively bringing four and still dropping seven into coverage.

That’s what we see on this 3rd and 10. It’s similar to his Frisco Fire Zone but only four rush here so technically, it isn’t. The extra blitzer is safety Mike Mitchell, shooting into the B gap between tackle and left guard. 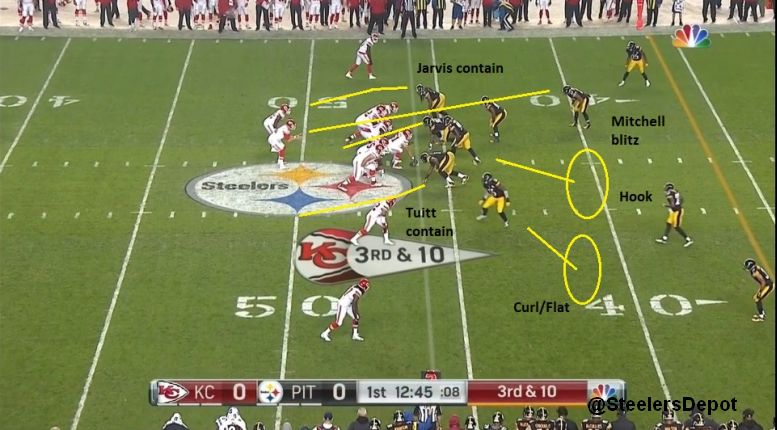 This is what Frisco looks like right out of Dick LeBeau’s playbook, a five man rush.

But you get the same idea. Again, it’s important to have rush lane balance and to eliminate any escape lanes. That’s Stephon Tuitt’s job, squeezing Alex Smith’s pocket.

Mitchell’s blitz doesn’t get home – he’s actually dangerously chop blocked – but it looks like the perception of a blitz causes Smith to leave the pocket when he doesn’t have to, floating into Tuitt’s contain rush. 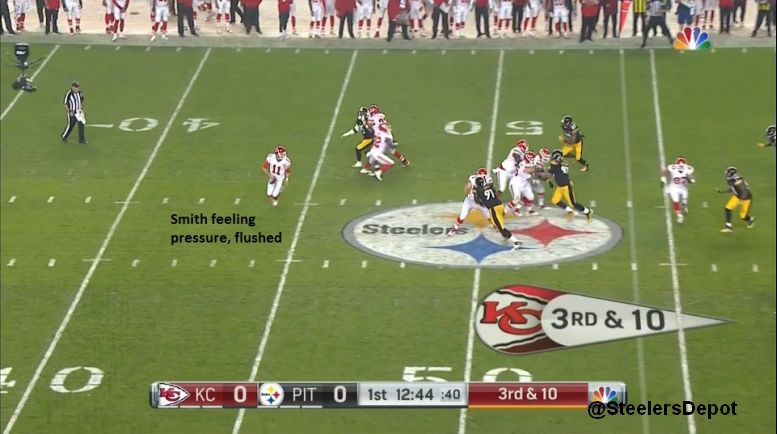 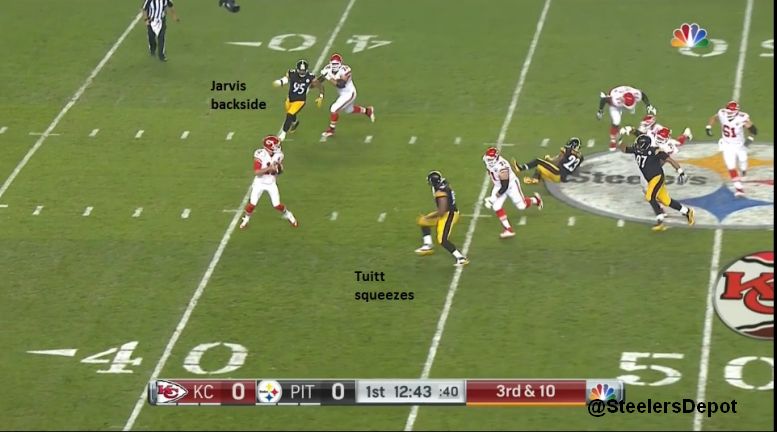 Tuitt’s able to get pressure, Jones is charging in from the backside because of how deep Smith has backed up, and Smith is forced to throw the football away. Kansas City is forced to punt.

Butler ramps things back up on the first play two series later. He calls his Storm Fire Zone, a concept we’ve covered several times before, a five man pressure with the safety off the edge and a combination coverage in the back end. Cover 3 to the away side, a Cover 2 look (soft squat) to the blitz (strong) side of the formation. 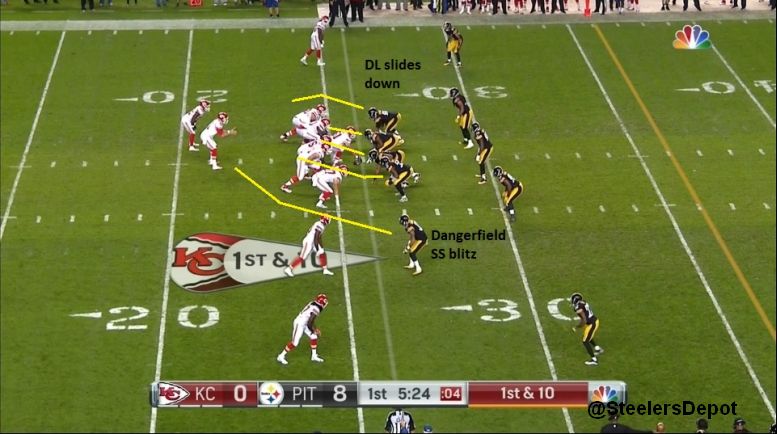 It’s a designed screen to the left for running back Spencer Ware but the pressure forces a quicker-than-planned throw from Smith before Ware is even open. 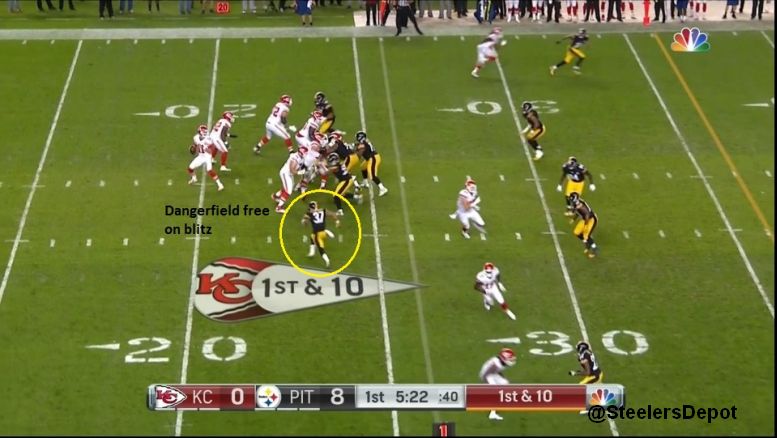 Cam Heyward uses a sneaky forearm shiver to bump Ware and then tips the pass.

Jarvis Jones capitalizes and comes down with the pick, setting up another Steelers’ score.

Butler was able to help create pressure without sending anyone from the secondary. In the third quarter, he sends a five man pressure – straight rush, no looping, scooping, or stunting. But it creates one-on-one matchups for the entire pass rush when Lawrence Timmons is sent as that fifth guy, solo on the center.

Heyward is able to rip under left guard Zach Fulton and take Smith down. 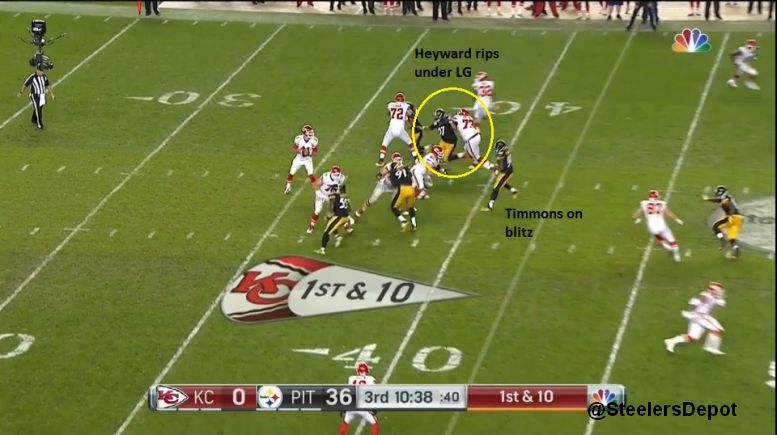 The game was over at that point but it put a nice stamp on an impressive day.

These aren’t the only ways Pittsburgh got pressure Sunday night. Have to just give credit to the players themselves for winning a lot more individual matchups than they had the first three weeks. But Butler played his role too, adjusted, and got better like the rest of the team.

Man did I miss it.