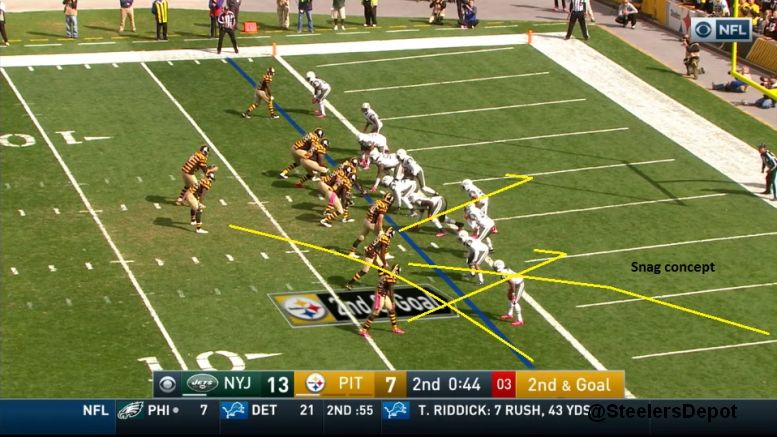 Antonio Brown almost went into the half with just two catches.

The Pittsburgh Steelers almost went into the half trailing.

Perhaps the turning point of his game came on the Steelers’ final drive of the first half. The New York Jets had just scored on a Brandon Marshall touchdown, taking a 13-7 lead. Twitter, as it usually is in its cynical nature, thought it was the beginning of the end. Another ugly loss to an opponent the Steelers played down to.

And then Pittsburgh got the ball back.

Again, at that point, Brown had two catches for 11 yards. Quiet as a mouse against a secondary that is just plain bad, despite having some name talent – Buster Skrine, oh yeah I remember him, he’s pretty good – and pedigree, and already toasted by see-saw Sammie Coates.

This is where Todd Haley came in and adjusted. He got creative with Brown, changing his split, opening up the route tree, and creating new matchups. And it worked.

Third play of the drive. First and ten on the Steelers’ own 40. Brown is lined up in the slot and runs a rub route, working under Jesse James, who does a nice job setting a little pick to get him a free release. 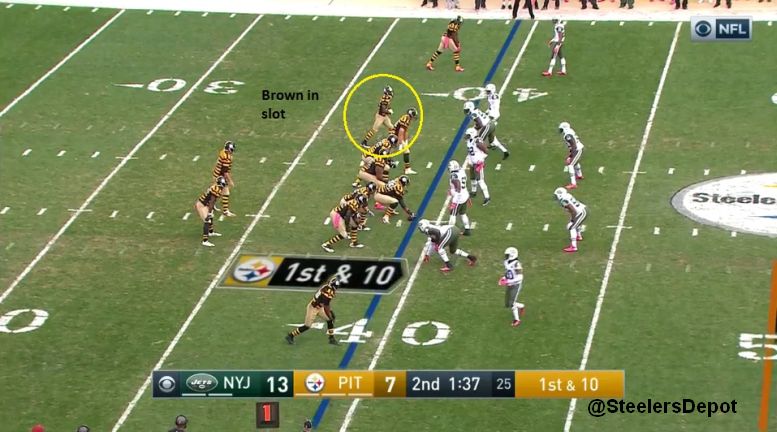 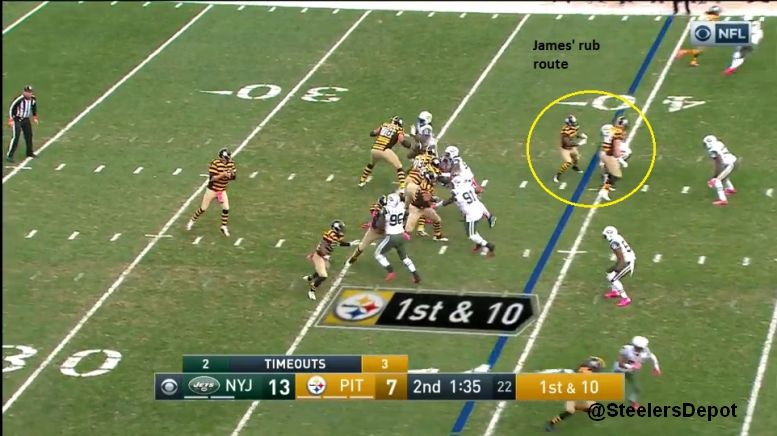 We don’t get many good angles of these plays because the Steelers are in hurry-up but Ben Roethlisberger is looking for him over the middle. Ben pulls his own Hingle McCringleberry, one pump, before finding Brown over the middle.

And then Brown does the rest to elude a tackler and pick up the first down.

More important is his next catch three plays later. Third and two on the Jets’ 42 with just over a minute left. Fail here and the team could’ve easily punted.

The Steelers are in 21 personnel, two running backs and a tight end, but dress up differently. Le’Veon Bell and DeAngelo Williams are split out wide and Brown is motioned from the backfield to the slot. 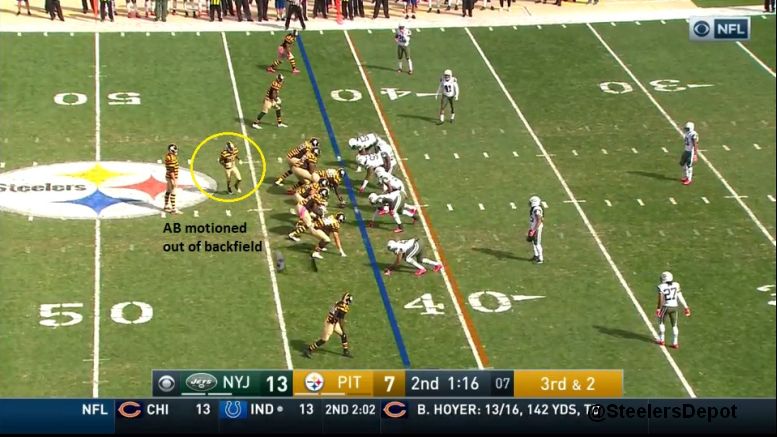 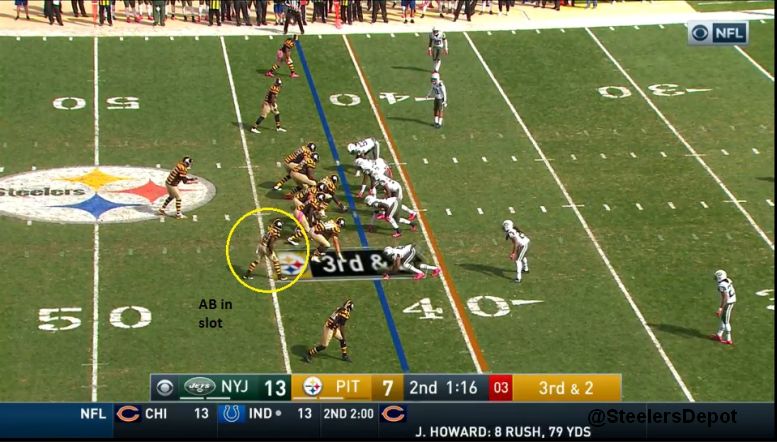 The route concept isn’t anything too notable but Brown again does a nice job of finding grass and settling down against zone coverage. Roethlisberger finds him and the Steelers move the sticks.

Haley demands his receivers be able to play everywhere, even all-stars like Brown, and this is why. Give the defense new looks, be able to handle any matchup, and help get a sorta-struggling receiver going.

I am not as plugged into the NFL as I am with the Steelers, obviously, but it’s things like this that help separate what Haley does than say, what the New York Giants do with a guy like Odell Beckham Jr. He doesn’t move around the offense as much so when he’s bottled up, there isn’t a whole lot of adjustments you can make. In Pittsburgh, there are plenty.

The last look, the go-ahead-for-good touchdown, has nothing to do with Brown. But I do love the concept and the extension.

We know Haley loves snag/spot concepts in the red zone. We’ve written about it time and time again. Yup, you get it again here.

He adds another route to the concept, sitting James down in the middle of the field like he does on a Hank Concept. From center over, there’s four routes for the defense to defend. Here’s the look.

The Jets, without their leader in linebacker David Harris, injured three players before, look to be in total chaos to defend this flood look.

Harris’ replacement, Erin Henderson, ends up driving on the flat to Bell. But there’s already a Jet serving as the flat defender and Henderson’s departure leaves James wide open to sit down in the middle of the field. 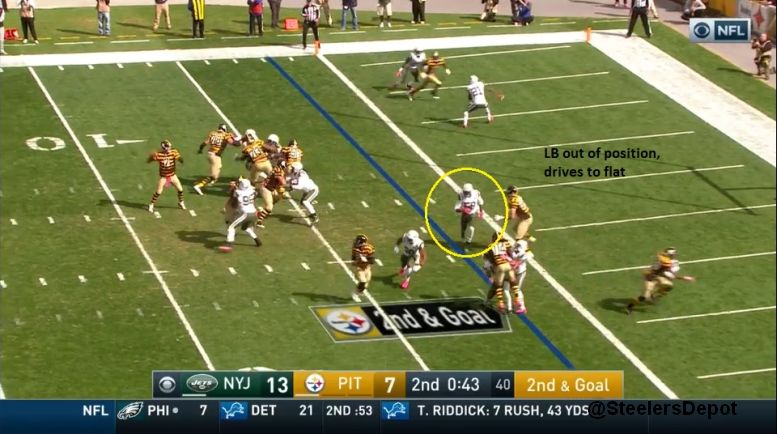 And three Jets, Henderson and two others, are caught up in the snag part of the route by Coates. Total dysfunction. 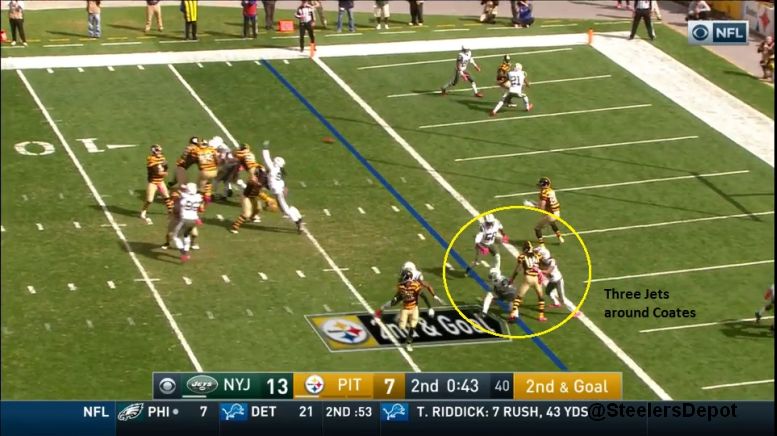 James is open and it’s the easiest points ever.

This came one play after Haley had a nice bunch concept to open up Coates, again, wide open, but unfortunately dropped.

With the score, the Steelers went up 14-13 and never looked back. Huge two minute drill to get the Steelers back on track and poised to dominant the second half.