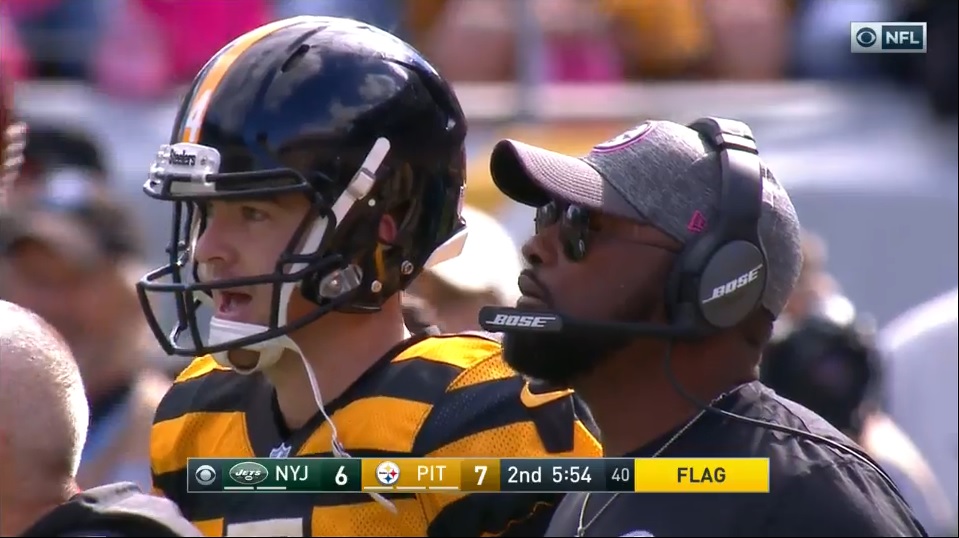 I was going to just chalk it up to a bad call and move on. An attempted at being innovative, or cute, or stupid, depending on your level for disdain to Mike Tomlin/Danny Smith/the whole world.

But then Tomlin explained his rationale behind the call.

“I did, but again, like I said, they’ve [Jets] got a good plan so I got to tip my cap to them. Those guys, they did a few things in all phases that were a little bit different than maybe we anticipated at the early going.”

Because of my Napoleon Complex of trying to know everything, I wanted to find out what the Jets did differently that busted the play.

Special teams is complex and I am far from an aficionado. It’s like filing a tax return. It’s boring, no one pays attention to it until something goes terribly wrong, and all I care about are results. Did it all go well?

But taking a dive into the Jets’ field goal unit and I might have found the motivation behind the fake.

It centers around one man: Buster Skrine.

Skrine lines up as the end man to the field side of every field goal. Whether it’s the team’s philosophy or something Skrine is just good at, he’s an aggressive player who constantly flies in off the edge, diving in the air in the hopes of a block.

I looked at all field goals, excluding extra points, against the Jets this year and in almost all cases, Skrine was flying in like an atom in the Large Hadron Collider.

I’ll show the rest in just screenshots, because you get the idea, but here’s a GIF of him flying in against the Seattle Seahawks.

Here are screenshots of nearly the rest in chronological order. 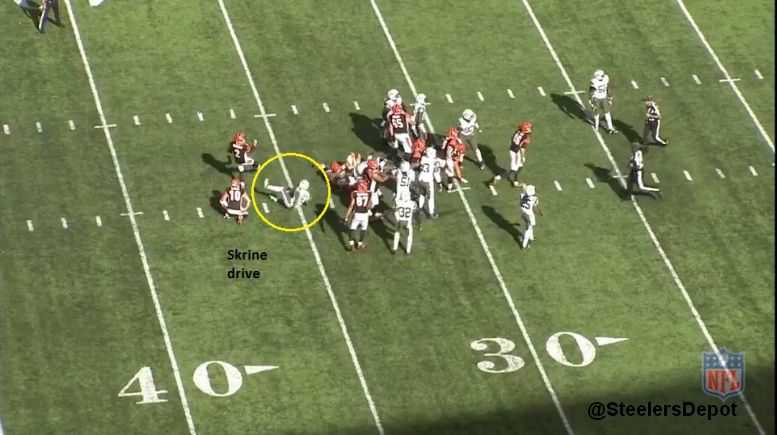 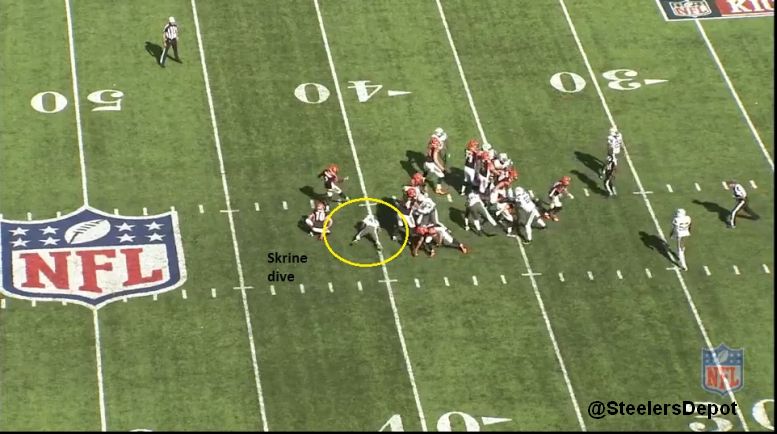 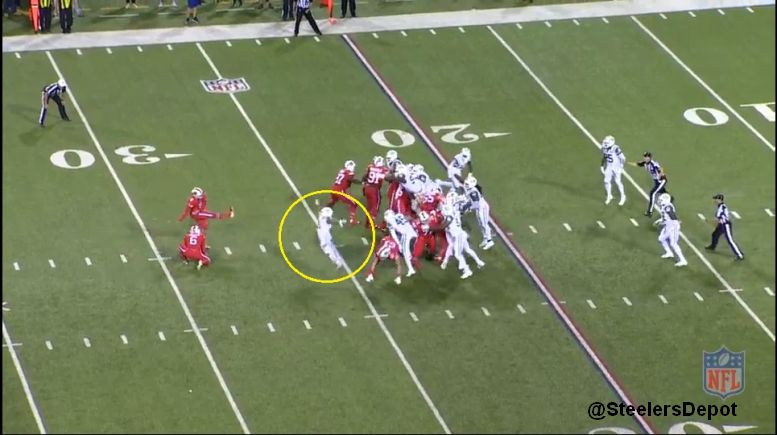 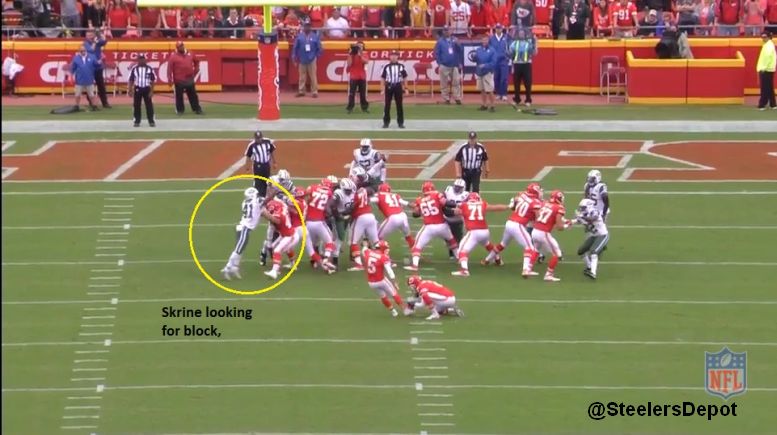 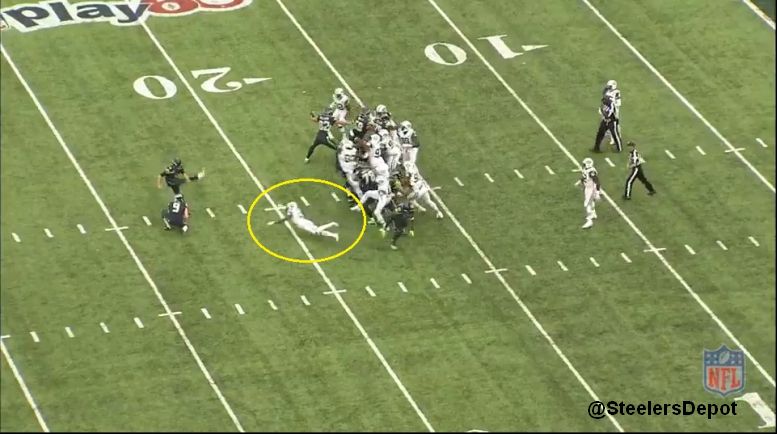 But on Jordan Berry’s fake, Skrine didn’t rush hard. He stopped, even before Berry had given any hint he was Charlie Brown-ing Chris Boswell and pulling the football away. 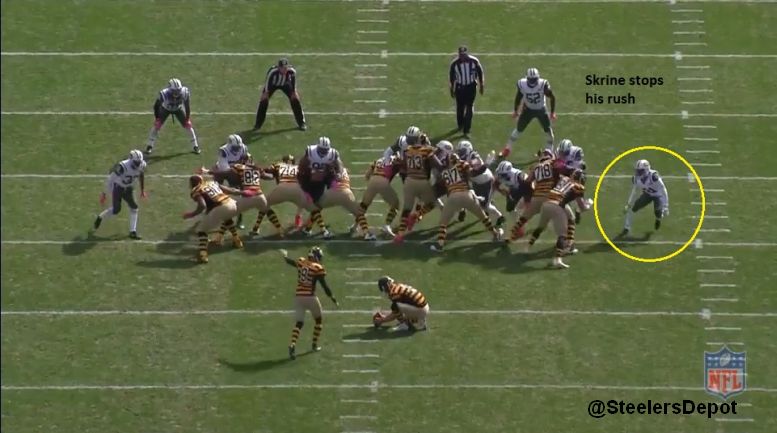 And you can see him, to the far right, in this GIF.

Why? That’s the more interesting question.

Maybe the fact Alejandro Villanueva was lined up off the line of scrimmage was an unintentional tip. Certainly not what the Steelers’ schemed but on special teams, anything that looks different from the norm can put a player on high alert. Remember the Steelers threw a fake to him last year and you can bet the Jets saw that film during the week.

Maybe Jesse James didn’t fire off like usual, though he looks pretty normal to me. Or maybe Skrine just had a funny feeling. It doesn’t matter. But he peeled back on the snap, forcing James to account for him instead of someone else. Like Rontez Miles, who tracked Berry down and made the tackle. 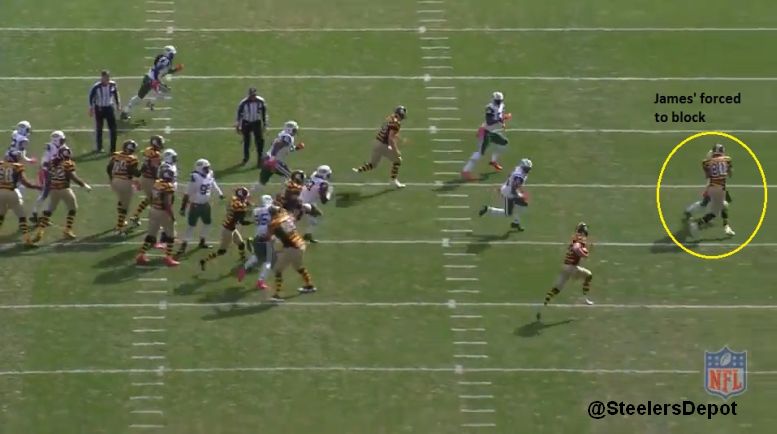 One last point. I actually am kinda surprised the Steelers felt comfortable calling this. It’s not like the sample size of kicks is very large to get a good feel for tendency. And once this year, the Jets did mix things up. Skrine still came in flying off the edge but the Jets dropped Miles into the flat, seemingly in case of any fake. 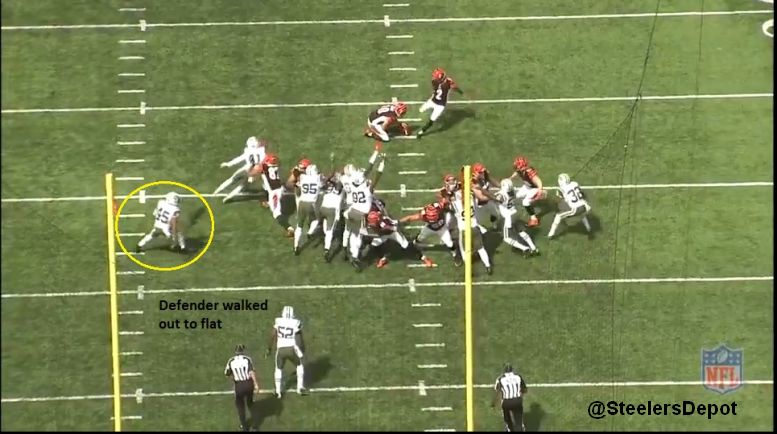 I’m not in their head. Maybe that wasn’t enough to deter me. Personally, I’m more conservative about these fakes and gadgets plays than Mike “Don’t Live In Your Fears” Tomlin is. But trying to peer into their mindset, the Jets’ aggressiveness appears to be the catalyst behind the fake.

That probably doesn’t make it any more digestible for fans to deal with, it doesn’t for me, at least, but there’s some catharsis in having a better idea of their reasoning.