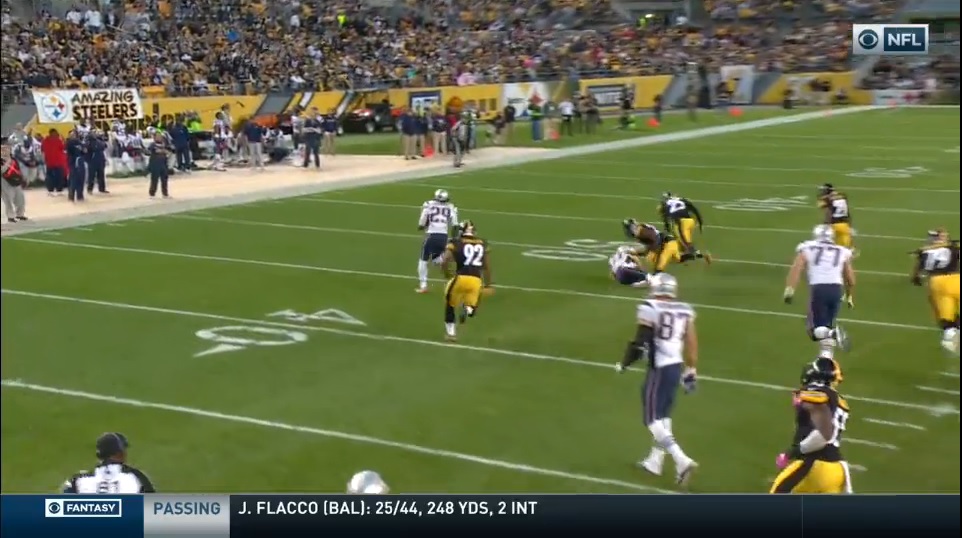 The Pittsburgh Steelers’ run defense is a problem. That much is obvious to everyone. The why is a lot more interesting.

“We acknowledge schematically we were willing to bleed a little bit in the run game in an effort to minimize big plays. In doing so, we would have to come off blocks and make tackles. Not enough of that for us to be successful.”

That second part is true, the Steelers didn’t get off blocks enough, but the first part isn’t accurate. Tomlin is seemingly implying they went to more nickel and sub-package looks to slow down the New England Patriots’ tight ends, making it more difficult for them to stop the run.

And to be fair, Bill Belichick said the same thing after the game. From the team site’s transcription of his presser.

“They tried to play some nickel defense against Rob and Martellus Bennett and we were able to get some good runs going with Blount. That kind of offset some of the defense they were playing there.”

New England was in heavy personnel, 12, 21, 13, or 23 looks, 30 times Sunday afternoon. And it is true that on seven occasions, nearly a quarter of the time, the Steelers responded in nickel (all coming against 21 or 12 personnel). That would seemingly make what Tomlin said accurate – they used nickel versus some heavy looks in an effort to stop Rob Gronkowski and Martellus Bennett.

But the Patriots passed on six of those seven plays. And the Steelers’ philosophy generally worked. Aside from a 37 yard completion to Gronkowski, they allowed just 20 yards on the five other passes.

However, it doesn’t explain the run defense one bit. In fact, the lone time New England ran the ball in a heavy look against the Steelers’ nickel, LeGarrette Blount was held to just a three yard gain.

Bottom line: yes, the Steelers mixed in some nickel in response to heavy looks, something they rarely do but made a justifiable exception, but it had zero impact on run defense. .

Had Tomlin’s and Belichick’s assertion been true, you can chalk it up to a schematic quirk, one you won’t probably use the rest of the year. No one has the weapons at tight end the Patriots’ boast. But this was just getting plain whooped on.

It wasn’t even the team’s base 3-4 that got chewed up. They did a fine job, allowing just 3.3 yards per carry on 15 carries with only one run going for more than seven yards.

The Steelers’ nickel defense against the Patriots’ 11 personnel, three receivers, just one tight end, that was horrific. They allowed 76 yards on nine carries, an average of 8.4 per try, and four runs of 9+ yards, including the Patriots’ long of the day at 25.

It’s always tougher to stop the run out of sub-packages, there’s no argument about that, but it’s important to frame reality. It had nothing to do with scheme or the Patriots’ two imposing tight ends.

And to be fair, coming into this week, the Steelers’ nickel defense was about in line, slightly worse, than last season. 4.3 YPC last year, 4.4 this year. After the Patriots’ game, it’s now up to 4.8.

You can also draw a parallel between this rising number and Cam Heyward’s injury. Pre-Heyward, it was 3.8 per carry in nickel. Post, it’s jumped that full yard to 4.8.

I know the most common response will be to uproot the scheme. Flip to a 4-3, a 3-3-5, a 5-2, whatever’s floating around the forums and message boards these days. I’d generally disagree with the notion but that isn’t the topic here.

I do know one thing. The Steelers’ run defense had nothing to do with the personnel New England used.