Anyone who watched the matchup last Sunday between the Pittsburgh Steelers and New York Jets would agree that WR Sammie Coates had an up and down day.  He was responsible for some explosive plays and 2 TDs as well as a few crucial drops.  During the second half, it was reported that Coates was playing with a laceration to his left hand which had been sutured at halftime, requiring 7 stitches.  It still isn’t clear which part of his hand had the cut; during the game, there were mentions of an injury to the “webspace” and more recently it was described as a laceration involving the left index finger.  On Friday, Chris Mortenson reported that Coates was also dealing with a fracture to the base of that finger.

Coates missed almost the entire week of practice, participating in limited fashion on Friday.  For most of the week, he was reportedly seen with a bulky dressing on his hand but told reporters that he was able to make some catches during his brief time on the practice field at the end of the week.

It’s not even clear when the injury occurred; Sammie himself didn’t know he had an issue until he noticed blood on his hand just before halftime.  After the Steelers scored the go-ahead TD, Coates was seen on the sideline with a gauze or tissue on his left hand.  He was far more focused on talking to his QB about the prior series (he was clearly frustrated about the missed TD): 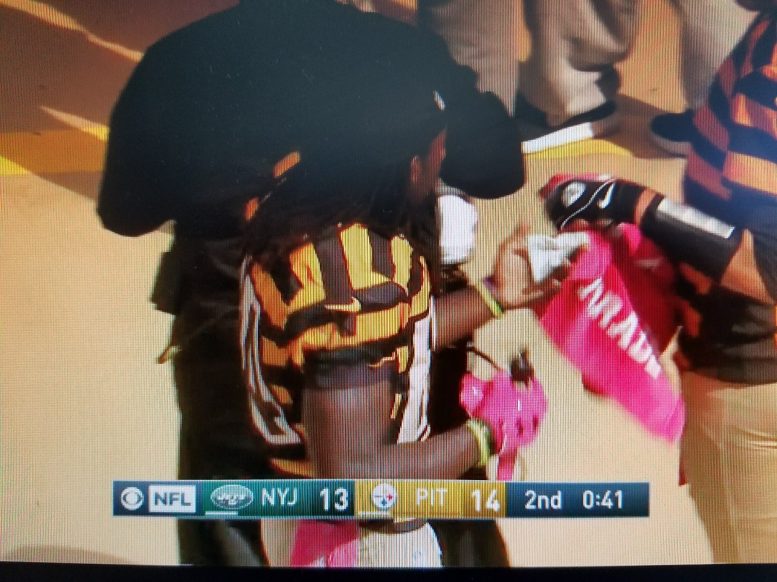 There are two plays that stand out at the end of the prior drive, one of which probably resulted in the injury.  With 1:04 left on a 1st and 10 from the Jets 22 yard line, Coates slowed down one step before reaching the end zone and what would almost surely have been a TD.  He landed on his outstretched arms, left hand first: 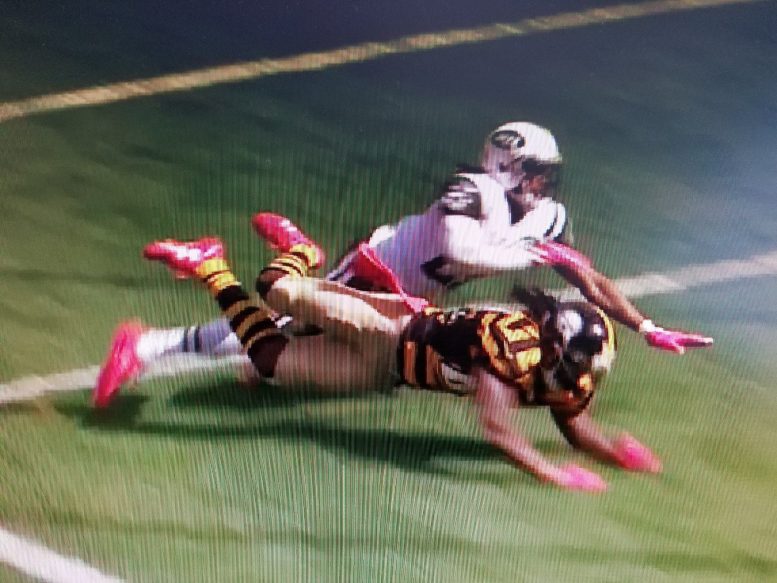 The following play, Ben Roethlisberger completed a 19 yard pass to Coates, who held the ball in his left hand securely as he rolled out of bounds.  If he were bleeding significantly at that point, it would have gotten on the football and most likely the ref or sideline staff would have noticed.  It is hard to tell from the limited camera shots of his hands since his gloves are pink.  They also look pretty heavy, so the blood may not have seeped through.

With 0:46 left in the half and a 1st and 1 from the Jets 1 yard line, Coates missed another bomb that sailed between his hands and would also have been a TD if caught.  Ben commented that he throws the ball hard, and it is possible that the ball itself caused the injury, but that seems unlikely.  As you can see here, the ball made direct contact with Sammie’s right hand on its trajectory, not the left: 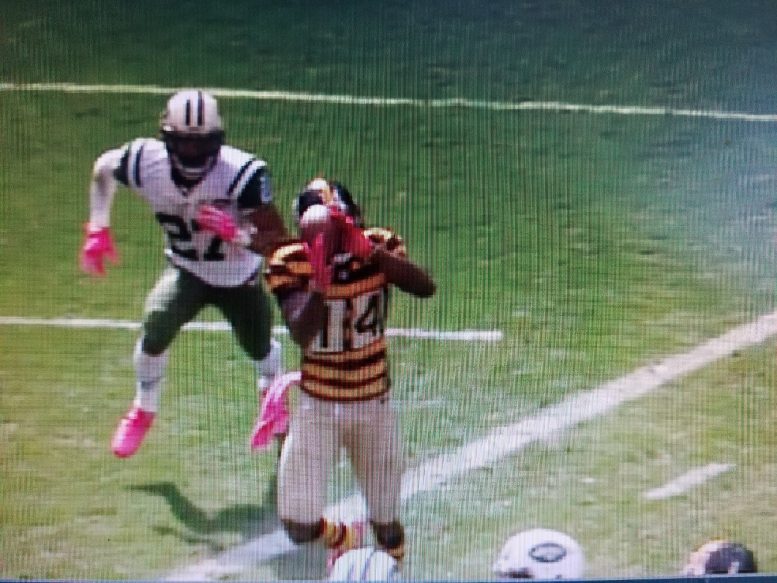 The next play, Jesse James makes his TD reception, and the offense is virtually done for the half.  Soon after that is when Coates is seen on the sideline with his left glove off and the dressing covering his palm.

Although the beat reporters that attend practice during the week are limited in what they can reveal unless the team or player makes it official, most of them seem fairly sure that Coates will be ready to go when the Steelers take on the Dolphins in Miami.  But will his left hand be healed enough?

Let’s start with the fracture.  Mort said it was the base of the left index finger that was fractured.  This would be the proximal phalanx, which is the largest bone in the finger that articulates with the bones of the hand: 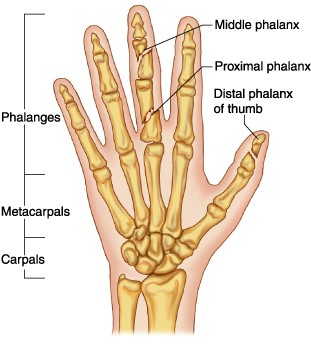 Most likely, Coates sustained a direct force to the base of his index finger, causing the bone to break and the skin to tear, and I would still guess that it occurred when he landed on his outstretched hands.  The laceration is a straightforward problem; Coates received sutures at halftime, closing the skin, and was able to play in the second half.  The physician injected his hand with local anesthetic prior to suturing it, which would have lasted several hours and provided pain relief during the procedure as well as the remainder of the game.

There are two issues that will determine Coates’s ability to contribute on Sunday: whether he is physically able to play and whether he can do so without causing worse damage which would delay recovery or cause long-term problems like a loss of flexibility or arthritis in the joint.

Without knowing what was seen on whatever Xrays were done, I would assume that the fracture is small and does not involve the phalangeal-metacarpal joint (the connection between the finger and hand).  I would also guess that the fracture is nondisplaced, meaning that the bone still has a normal alignment.  If either of those had been the case, the WR would most likely need a cast for 3-4 weeks and even possibly surgery to allow healing with proper alignment and there is no way he would even be listed as questionable for week 6.  Although he was reported to have a large dressing on his hand, there was no mention of a cast.

It is possible that the fracture is just a hairline and not significant.  Usually a non-displaced fracture of the proximal phalanx occurs when something hits the bone forcefully; however, the blow is swift and dispersed along a relatively larger area. In some cases, the bone does not break completely and all that is found is a crack on the bone.  In that scenario, the finger will be sore but will still function normally.  Coates was reportedly wearing a splint as part of his dressing this week, which would give additional support during the healing process.

So how long do lacerations take to heal?  There are 3 phases: 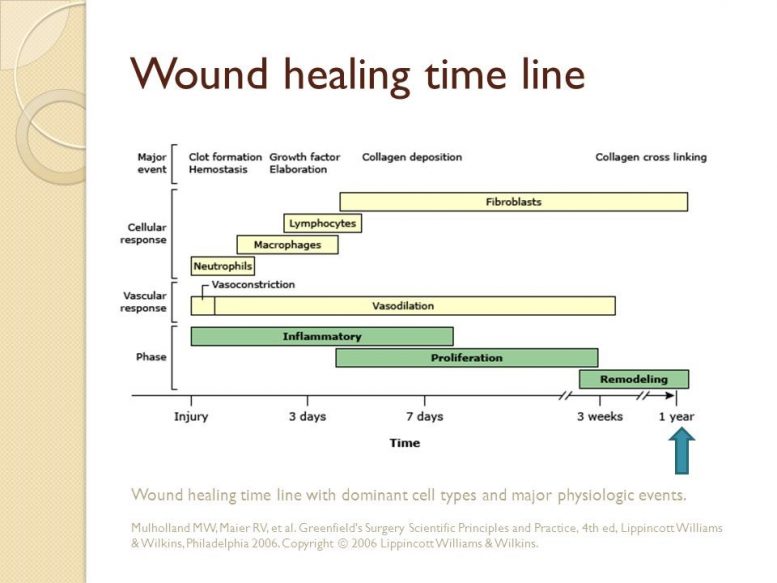 During the inflammatory stage, the body’s natural response to injury, the blood vessels initially contract to stop bleeding.  Shortly after that, the blood vessels in that area dilate, allowing the cells and nutrients needed for healing to be brought in.  This is the point where Coates would have noticed an increase in swelling and pain.  During the proliferation phase, the wound is rebuilt on a cellular level, as a collagen scaffold is built, new blood vessels develop, and fibroblasts help to create healing tissue.  The remodeling phase begins at 3 weeks after injury and continues for the first year, characterized by wound contraction and collagen remodeling.

Hand lacerations are typically closed with nylon sutures, which are left in place until the skin edges have healed together well enough that they won’t split apart.  For the first week, the wound has almost no strength, but this increases gradually over time.  Here is a depiction of the tensile strength of the closure compared to the skin prior to injury: 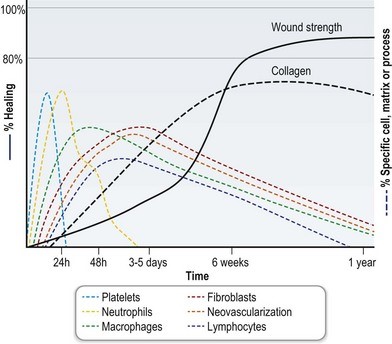 By 2 months after injury, the closure has reached peak strength, about 80% of the original skin pre-injury.  The skin closure will never reach 100% strength, but that certainly does not leave a risk of separation down the road.

Based on all of this, Sammie Coates should be able to use his left hand without a significant risk of the laceration reopening if the sutures are left in place.  If OC Todd Haley wanted to overthink this, he might put Coates is a position where he will be crossing from right to left, potentially putting more of the stress on the wideout’s right hand.  But the way the Steelers coaching staff tends to approach injuries, Coates won’t see the field unless they are confident he can help the offense without making allowances for any physical challenge.   With that in mind, if Sammie doesn’t have too much pain in his left hand, he has a good chance to keep his season long streak of 40+ yard catches alive.