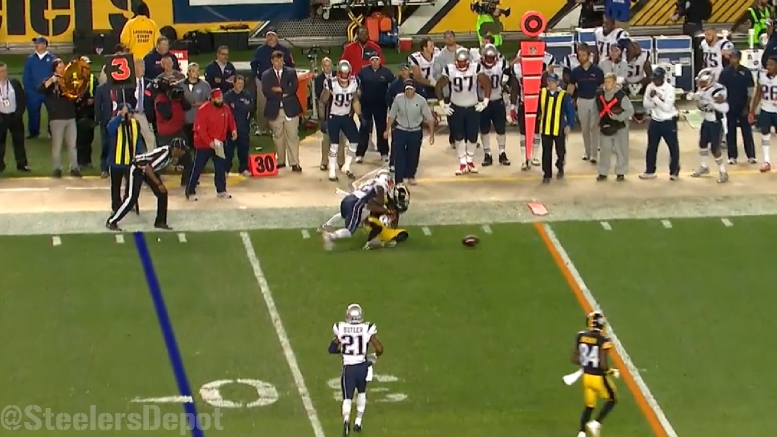 If you really want to gain some understanding as to just how shorthanded the Pittsburgh Steelers offense was on Sunday against the Patriots, I think no individual statistic might illustrate that point better than noting the fact that wide receiver Darrius Heyward-Bey, who is essentially fifth on the depth chart when everybody is healthy, logged 62 of the Steelers’ 72 offensive plays during the game, which was three more snaps than Antonio Brown played.

Sammie Coates played seven snaps during the game. Markus Wheaton didn’t even dress. Eli Rogers was sidelined for undisclosed reasons despite being healthy, which suggests that there is likely a disciplinary issue at play with regards to that situation.

But the Steelers just played a game in which Heyward-Bey logged 83 percent of their offensive snaps, Brown logged 81 percent, and Cobi Hamilton, who was on the practice squad two weeks ago, played 67 percent of the team’s snaps, a total of 49 out of 72.

With both Wheaton and Rogers not playing, it fell largely upon the shoulders of Heyward-Bey to man the slot position for the Steelers when they were running out of their 11 personnel. And frankly, for a man who essentially scored two touchdowns during the game, he really did not execute very well through much of the evening.

While he did officially catch three passes for 30 yards, one of which was a 14-yard touchdown reception, and was admittedly a nice catch, his impact on the game outside of that one play was pretty minimal considering that he played 62 snaps.

And it wasn’t for a lack of targets either, as, officially, he was targeted seven times. Unofficially, he was targeted nine times, with two of those targets having been wiped out by penalties. One of them wiped a touchdown off the board on a crossing route following a 14-yard reception on a hold, but he also drew an offensive pass interference penalty earlier in the game that put the offense in a second and 18.

While he did catch a nine-yard pass on third and three on a flat route on which the route pattern cleared the coverage in his area, he also dropped a pass on third and seven later in the game, and on another clearly ran the wrong route with just two minutes to play. He did catch a seven-yard pass on a scramble drill two plays later to set up fourth and three, but then he ended the game with another dropped pass on fourth down, which is not a good look regardless of whether or not there is any hope of winning.

An analysis of the run game also shows that Heyward-Bey was routinely a non-factor in that aspect. In the instances in which he was engaged as a blocker, it was almost a given that it would occur on the back side of the run.

The long and short of it is that the Steelers needed Heyward-Bey to play a big role due to a variety of circumstances, and in spite of the fact that he technically caught two touchdown passes, his impact on a per-snap basis was pretty minimal.