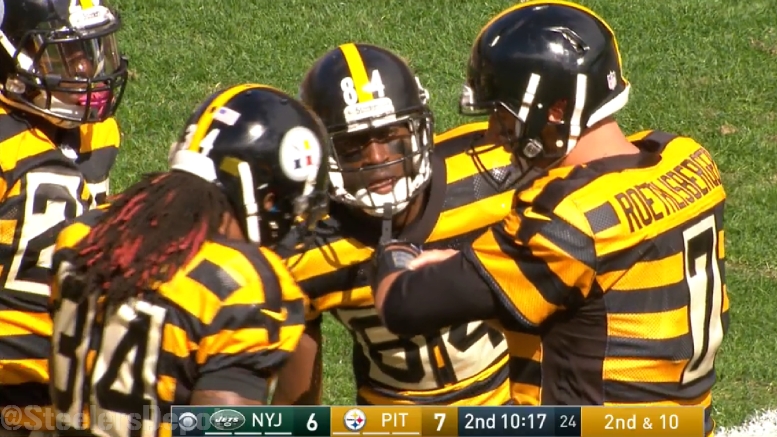 You may or may not have noticed, but it’s been just two games since Pittsburgh Steelers running back Le’Veon Bell had been back, and at least if Sunday’s game can be cited as any sort of indication, backup DeAngelo Williams is already becoming an afterthought.

During the Steelers’ 31-13 victory, Williams had just one touch, a single carry for zero yards. He was also targeted once in the passing game on a ball that was floated over his head, behind the line of scrimmage. While he got a small handful of snaps used together with Bell also on the field, it is clear that his impact on the offense was drastically reduced.

Of course, Williams had five touches last week, gaining seven yards, including a two-yard touchdown, on four carries, as well as a lone reception for two yards. While his yards per touch average was obviously terrible, he was still getting looks, and was an active part of the game plan.

That was not so this week, especially when you consider that the Steelers ran several more plays this game than in the game before, and yet Bell’s workload took a sharp tick upward. Bell had 18 carries and five receptions on six yards the week before. On Sunday, he had 20 carries, and added nine receptions on 11 targets.

Obviously, the Steelers want to use Bell as much as possible, given the fact that he is already a proven commodity on the field as an All-Pro talent. He has gained over 150 yards from scrimmage in each of the first two games, and has over 200 rushing yards as well as over 100 receiving yards through two games, although he has yet to get into the end zone. Williams has four total touchdowns on the season.

It is unclear what this week or last week means, if anything, about the future of the distribution of touches at the running back position between Bell and Williams going forward. In all likelihood, it is going to continue to be at least a work in progress as they try to figure out how to keep Williams involved and productive while maintaining their ability to consistently field their best offense.

Although he got shut down against the Eagles, Williams reminded us all during the first two games that he can be the Steelers’ featured back if need be. He even has 15 receptions for 91 yards on the season, including just the eight receiving touchdown in his career.

But there is something to be said for having a quality backup player that you don’t even have to use simply because your starter is that good. Bell is that starter who is just that good, who even on a day in which the Steelers struggle to run the ball—he had 66 yards on 20 carries on the ground—he can still carve out the defense with nine receptions for 88 yards through the air.