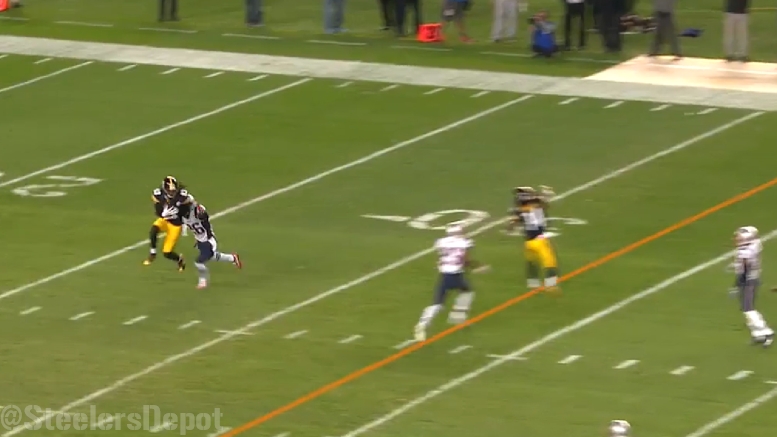 The Pittsburgh Steelers made a late offseason addition to their 90-man roster this past summer when they brought in first-year wide receiver Cobi Hamilton. Although he came in likely without much going for him, he was able to work his way up the pecking order pretty quickly, and by the end of the preseason, he found himself sixth on the wide receiver depth chart on a deep unit.

Over the course of the past two games, the Steelers have been essentially operating with a group of just four wide receivers, because fourth-year wide receiver Markus Wheaton has sat out the past two games with a shoulder injury that has been a problem since training camp, and Sammie Coates has been wrestling with a fractured finger and swelling in his hand that has limited both his snaps and his productivity.

Though he hasn’t been called upon a great amount, he has shown that he has the ability to step up when his number is called. Last week, he caught both passes thrown his way, both of them coming on a late 97-yard touchdown drive.

He started off that drive from the three-yard line coming down with a 13-yard reception, and while he sat out most of the rest of the drive, he came back to catch a 23-yard touchdown pass down the left sideline in the corner of the end zone.

Yesterday, he saw an increased number of targets, six in all, catching three passes for a total of 36 yards, but for at least two of his incompletions, there was really little that he could do, though on the last one, he may not have run the right route and the ball ended up in empty space.

The first incompletion came on the Steelers’ final drive of the first half, a deep pass on which the cornerback held Hamilton’s left arm, which should have been flagged for defensive pass interference. Later in the game, he was the recipient of an intermediate target that was deflected ahead of him, and yet he still made a nice adjustment to almost catch the ball.

All three of the receptions he did bring in came on the same drive, a field goal drive in the second half. Following a four-yard reception on first and 15, he came back two plays later to make an impressive 15-yard stab as he slid to the ground with outstretched hands.

Later in the drive, he converted another third-and-10 play, this time with a big 17-yard reception in front of the defensive back coming over the middle down the field. If nothing else, the showing reinforces the notion that the Steelers do have some depth at the wide receiver position.