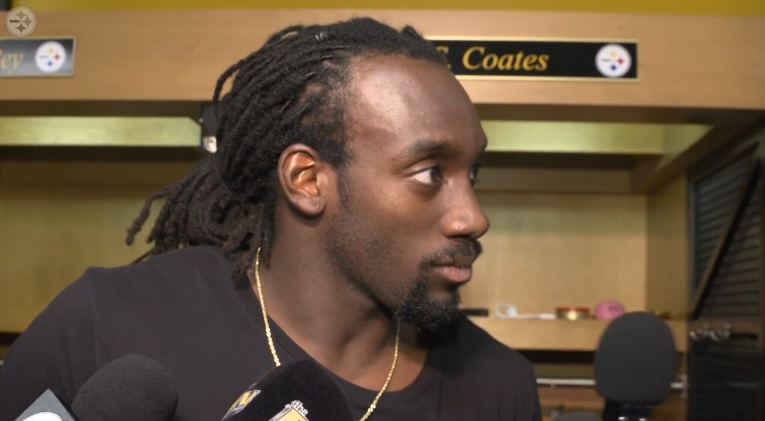 That’s the way War and Peace [Edit: A Tale of Two Cities, I’ve clearly read neither] and the cheesy intro of this article began. But it’s an accurate summation of how Sammie Coates’ Sunday afternoon went.

Six catches for 123 yards and two touchdowns looks like a sparkling statline. But it might’ve been the most roller-coasting such box score result in NFL history. At least four drops, including one in the end zone before being bailed out by Jesse James on the following play.

Perhaps the win and those big plays soothed those problems but Coates was forthright and took the blame for his drops.

“It’s just one of those days,” Coates told reporters via Steelers.com following the game. “You got to bounce back and keep the confidence in your guys. They still had trust in me so that was a good thing. I had to come back and respond.”

It’s not an excuse but his first half hand injury perhaps serve as an explanation for his drop problems. Not that Coates was embracing such excuses.

“I can’t use that as an excuse. I’m a pro. That can never be an excuse. I kind of got down on myself but I found a way back and I bounced back and hey, finished pretty good. I just gotta keep going.”

Coates has proven to be a mentally tough player, already experiencing the ebbs and flows of a career, but has gotten support from his teammates and coaching staff. Maybe none more than Ben Roethlisberger, who reportedly convinced coaches to keep him on the field in Week Two and again kept his spirits high today.

“He bounced back,” Roethlisberger said. “That’s the biggest thing. He ends the game making some first down catches. Staying inbounds. And then the touchdown which was a big catch for him. I love to let him know his confidence isn’t going to waver for him, even if he has a couple drops.”

Roethlisberger also would not excuse the drops because of his hand injury but told reporters he needed stitches and the obvious problem someone with stitches might have in catching the football.

Coates’ day began as well as it can be drawn up, a 72 yard touchdown to give the Steelers’ their first lead of the game. Since 1997, Coates’ six catches of 40+ yards moves him into 11th place in Pittsburgh, per Pro Football Reference. It’s only four behind Martavis Bryant and as many as Heath Miller had in his whole career.

But those big plays will be talked about as much as the drops and a frustrating inconsistency in the early stages of his career.

“You gotta bounce back and not let it keep snowballing” Coates said. “I kinda did that today. I got to grow from it. That’s why I keep going in practice and keep going hard every day.”

It’s clear his attitude and approach to getting better has never dropped.