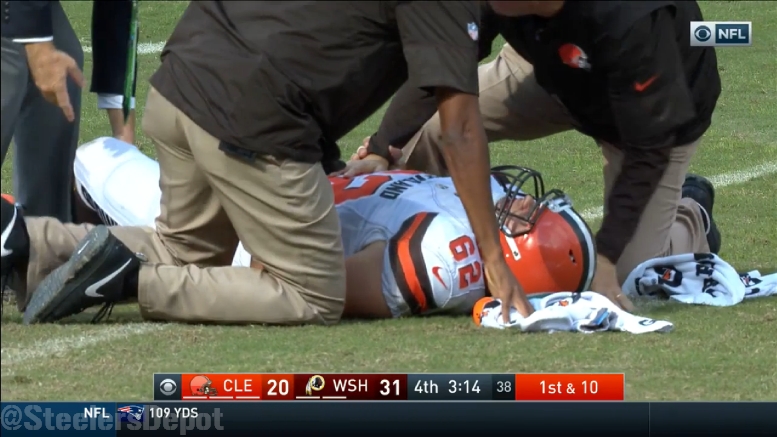 Things are not going particularly well for the Cleveland Browns thus far through the first quarter of the season. Unfortunately for them, nearly all of the articles that I have written thus far this season about the Browns have been negative in nature, and that is simply a reflection of their circumstances.

The Browns have lost each of their first four games, and outside of the season opener, the games have been closer than the scores suggest. On Sunday, they lost 31-20 to Washington, but they 20-17 lead heading into the fourth quarter before they gave up two touchdowns in the final frame.

There are many issues involved in producing these defeats, but perhaps the biggest factor has been a relentless rash of injuries, and the situation only got worse on Sunday.

You might recall that their starting center, second-year Cameron Erving, suffered a bruised lung in the second game of the season and has missed the previous two games because of it. It is also not clear when he will be able to return, but it is fairly clear that he will not be ready for their next game.

The Browns’ initial plan to replace Erving involved moving starting right guard John Greco to center and playing Alvin Bailey at right guard. This was the lineup that they started in Miami when they lost 30-24 in an overtime defeat.

But Bailey was docked a one-game suspension that kept him out of Sunday’s game, and Cleveland modified their plans as a result. They started rookie seventh-round draft pick Austin Reiter at center, moving Greco back to guard, and from all accounts, Reiter handled himself well in that role.

The only problem is that he ended up suffering a season-ending knee injury during the course of the game. Greco had to take over at center for the final dozen or so snaps of the game, and rookie tackle Spencer Drango checked in at right guard.

At the moment, the Browns are weighing their options to pencil in a starting lineup for Sunday, but the most immediate likelihood is for them simply to revert back to the lineup that they fielded in the third game of the season, with Greco playing center and Bailey at right guard.

It doesn’t help things that they are down to their third quarterback, and are also down their top wide receiver, while recently opting to part with their former All-Pro wide receiver who was supposed to come off of a suspension after this past game.