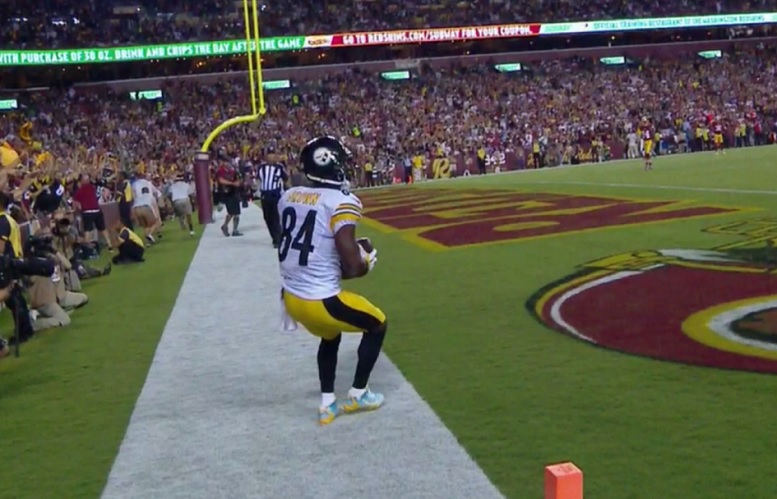 Dean Blandino, the NFL’s Senior Vice President of Officiating, released his weekly officiating video for Week 4 on Friday and quite a bit of it is dedicated to what is and isn’t considered unsportsmanlike conduct as it relates to taunting and sexually suggestive celebrations.

According to Blandino, through the first four weeks of 2016 regular season the NFL has flagged 16 instances of taunting and 19 unsportsmanlike conduct penalties in 63 games. As you know, Pittsburgh Steelers wide receiver Antonio Brown has been flagged and fined twice so far this season for his end zone twerks following scores.

“So dancing’s ok. Again, celebration, emotion, that’s all part of what makes the NFL great, but if its sexual suggestive then that is a penalty,” Blandino says in the video. “And the bottom line is that there are many, many kids out there that are NFL fans, that are playing football and they see our athletes and they mimic what they do. And we wouldn’t want some of these things out on the youth football field and we have a high standard in the NFL and were going to maintain that standard. So anything that’s sexually suggestive is going to be a foul. If it looks like it, it probably is and were trying to give our officials some consistent guidelines.”

On Friday, Brown talked more about his twerks and the fines that followed them and gave no indication that he was going to stop doing them.

“I did it the first time and tried to minimize with two, and still it’s a fine,” Brown said, according to Ray Fittipaldo of the Pittsburgh Post-Gazette.

Brown, of course, is talking about the number of pumps he does during his twerk. Even though the Steelers wide receiver has now been fined over $36,000 for his post-score celebrations, it doesn’t seem to faze him at all.

“It’s a game, you have to have fun. I can’t stop having fun,” said Brown. “It’s always fun when we get to win games and do what we love to do. We work so hard over the course of the week. When you get in the end zone you’re filled with so much fun, passion and emotion.”

Also included in Blandino’s latest video is a breakdown of the touchdown catch by Steelers wide receiver Markus Wheaton against the Kansas City Chiefs last Sunday night that wasn’t overturned after it was reviewed. Wheaton caught the pass on the side of the end zone while falling backwards and appeared to gain control while going to the ground. While he did not get two feet down, it appears as though his right leg above the ankle could have hit the ground as he was going out of bounds and after he got the foot on that leg down. Blandino stated that a call on the field stood because there wasn’t enough visual evidence to overturn it.