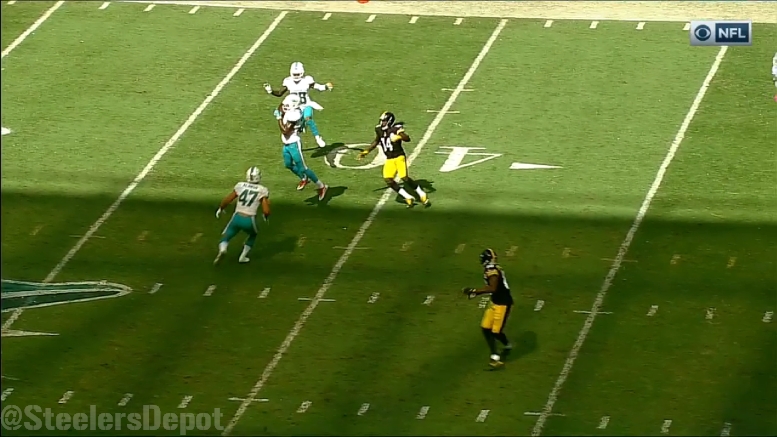 It is at this point that is cannot be ignored that the Pittsburgh Steelers, and quarterback Ben Roethlisberger, have real, meaningful struggles in their ability to operated efficiently and without unforced errors when they are playing away from Heinz Field. After dropping a dud in Philadelphia three weeks ago to the tune of a 34-3 loss, they allowed their second 30-point opponent of the year after Miami closed them out, 30-15.

And it should not go without noting that 10 of Miami’s points were created off of turnovers, specifically interceptions thrown by Ben Roethlisberger on questionable decisions. Likely, neither of those passes should ever had been thrown.

It was fairly reminiscent of Roethlisberger’s first game back after suffering a sprained knee last season against the Bengals, during which he tossed a couple of interceptions on passes that never should have left his hands. He seems to be prone to making these sorts of unforced errors when he is playing while trying to compensate for an injury.

There was some hope that the Steelers had exorcised their road demons after they came out and hammered what turns out to be a pretty good Washington team in the opener, winning by a margin of 38-16 in the end, doubling up the home team and then some. That particular opponent has gone 4-1 since that game, so they were no pushovers.

Miami was supposed to be, by most accounts, entering the game with a 1-4 record that featured a measly overtime victory against the Browns, during which Cleveland missed a potential game-winning field goal in the waning moments of regulation.

Of course, as the story usually goes, the Dolphins are, or have the potential to be, a much better team than their record indicates, and it helped yesterday that they finally had their starting five offensive linemen together, while the Steelers were missing some critical defenders.

But the offense did not operate nearly the way it should have been capable of, and it continues a theme in recent years of Roethlisberger, at least statistically, not stepping up to the plate. Looking at just this year’s numbers, through three road games, he has tossed four touchdowns to four interceptions. In three home games, it’s 12 touchdowns to two interceptions. He is also completing a comparatively low 60.9 percent of his passes and 6.9 yards per throw.

These are actually pretty meaningful regressions in some aspects, as Roethlisberger completed over 70 percent of his passes on the road last year, and about 66 the year before. He averaged 8.2 and 7.4 per throw as well. In 2014, he even had a nine-to-five touchdown to interception ratio, although that is still quite average. But he did throw only five touchdowns to nine interceptions on the road last year.

The bottom line? Really, Roethlisberger has to figure out how to cut down on the interceptions when he is away from home, and find more success in the end zone. He can do it at home, as the numbers show—why is there such a start contrast on the road?

But, of course, that will now have to wait…