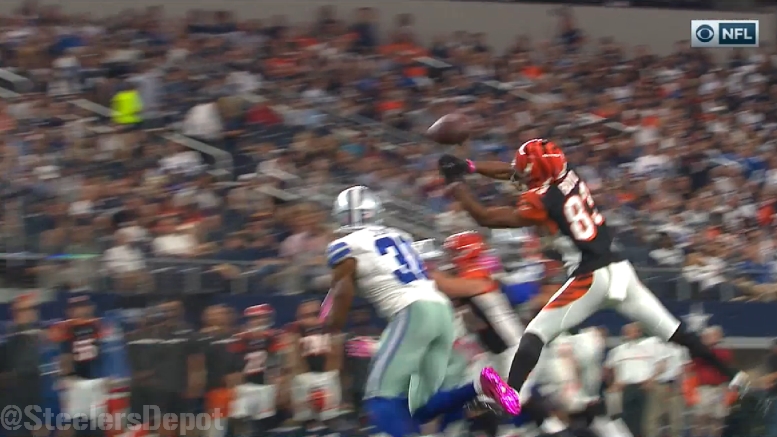 The Cincinnati Bengals may be the defending champions of the AFC North, but they are already falling behind in the division race just five games into the 2016 season. After narrowly escaping defeat in their season opener, the Bengals have dropped three of their last four games, with the only victory a home game on a Thursday night, which has been notoriously favorable.

More importantly, however, they are already trailing the Ravens, in spite of the fact that they have dropped their last two games, and especially the Pittsburgh Steelers, who have gotten out to a 4-1 start, their best start to a season since 2010, when they were able to advance all the way to the Super Bowl.

Sunday’s efforts did the Bengals no favors in looking to right the ship, as they got steamrolled by a young Cowboys offense that put up 28 points on them early into the second half, and by that point, the rest of the game was merely academic. Cincinnati was able to add some sympathy points late to make the final score more respectable, but that was simply cosmetic.

Both of the Bengals’ touchdowns came in the fourth quarter, the first with about 10 minutes remaining in the game, and the second coming within the final three minutes. The Cowboys were able to bleed out the clock following that second drive even through two Bengals timeouts and the two-minute warning, so they were never even able to get the ball back to draw within a score.

The only bright spot of the game was perhaps free agent wide receiver Brandon LaFell, who was the team’s offensive receiving leader in every category, with eight receptions, the only skill position over 50 yards with 68, and both of their touchdowns.

Cincinnati did not turn the ball over once, but in fact recovered two fumbles from the Cowboys, but that was not enough, as they were pretty well shut down by Dallas until late in the game. A 60-yard dash touchdown run by their rookie running back was the exclamation point on the day, which signaled that the game way at that point for all intents and purposes, over.

It’s not entirely clear how the Bengals could have dropped three of their first five games of the season after going 12-4 last year, with a quarter of the season functioning with a backup quarterback, but there can be no dispute that it is their reality.

Part of the problem has certainly been scoring, as the Bengals have not put up more than 23 points in any game this year, and have scored less than 20 points three times, including Sunday’s 28-14 loss. They rank 26th in scoring as of the time of this writing.

Perhaps Cincinnati underestimated the impact that their offensive losses would have, losing two of their top receivers and their right tackle, as well as their coordinator. Their Pro Bowl tight end has also missed the first five games. But the question is quickly becoming whether or not they even have enough time left to right the ship. There are three non-division-leading teams right now in the AFC who have a better record.