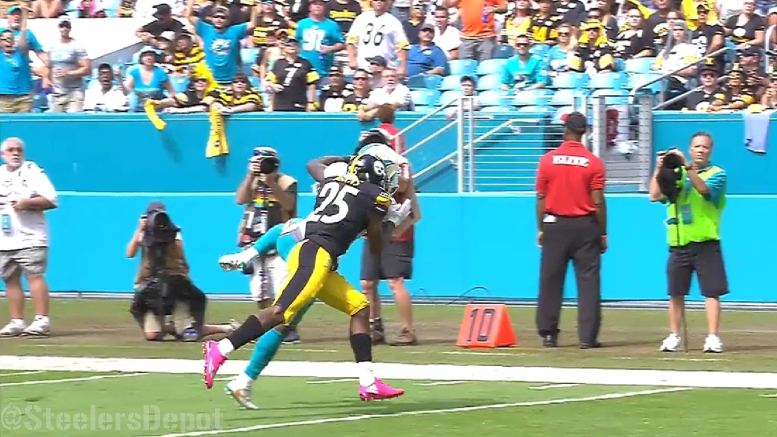 It was a rough game for the entire Pittsburgh Steelers’ defense so it’s unfair to point out any singular player but Mike Tomlin was asked specifically about Artie Burns’ performance. Tomlin called it “spotty,” a rare moment of some non-praise for a player.

“I thought it was spotty,” he said at Tuesday’s press conference. “It needs to be more consistent but I think that could be said for a lot of guys, particularly the young ones. Whether it’s crack/replacing in run support or keeping the ball in front of us, those two big plays we gave up in the first half I thought was a significant element of the game from a defensive standpoint in the first half of the game.”

Dave Bryan did a great job breaking down both plays, a 39 yard completion to Jarvis Landry and a 53 yard reception to MarQueis Gray, each putting Miami inside the five yard line. Check out his article here for the recap and GIFs.

Tomlin, in another relatively rare moment, got into specifics of what happened on each play.

“One of them was a scramble play that could or should’ve been a sack where the tight end got behind Will Gay and another was a third and seven we were very capable of winning. They ran a switch release and Artie was in deep defense and should, and is very capable, of keeping the ball inside and in front of him. We didn’t in those two instances.”

His explanation basically echoes what Dave wrote about. We also broke down some of the problems with the Steelers’ run game Monday morning, referring to the crack/replace issues Burns and Ross Cockrell had from an assignment and execution standpoint. You can check out that article here.

Burns was basically getting the start, usurping Sean Davis, and playing as the first team nickel. It’ll be interesting to see if Burns retains his role this week against one of the league’s best offenses and coach, who highlights a defense’s weaknesses better than anyone else in the game.

With their tight ends, a big chunk of the secondary will see work – there will probably be lots of dime defense and 4 CB looks – but perhaps Justin Gilbert will get the nod.

Regardless, the secondary is going to have to play a lot better across the board to slow down Tom Brady and the gang. So far, no one in the league has.