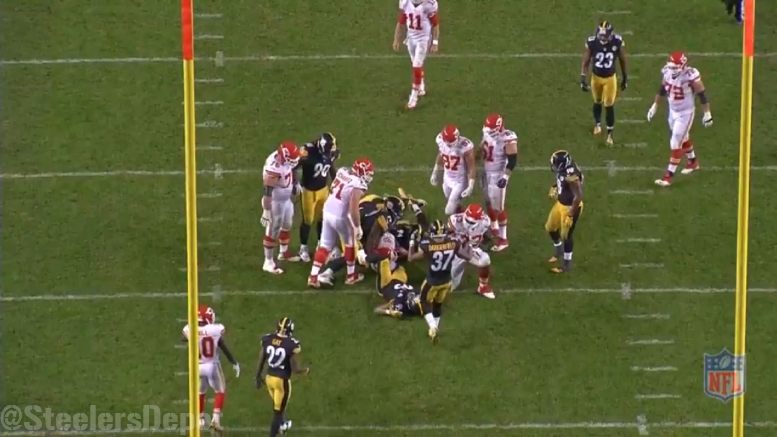 Question: How will the Steelers cope with the injuries that they were dealt at the outside linebacker position?

Over the course of the Steelers’ victory on Sunday against the Chiefs, the home team lost not one, but two of their four remaining outside linebackers healthy on the 53-man roster.

Fourth-year veteran Jarvis Jones, who had an interception early in the game, got rolled up on later in the contest and suffered what was likely a high ankle sprain. Meanwhile, second-year contributor Anthony Chickillo also was forced to leave the game with a knee injury. Dating back to the preseason, both have dealt with multiple injuries.

Over the course of the past season-plus, the Steelers have resorted to using a platoon of players at outside linebacker in order to compensate for the lack of performance from the starters. But they will struggle to do that, obviously, if their numbers are reduced.

To be fair, Chickillo did participate fully in practice yesterday, but it remains to be seen if he is able to stack two practices together, and we have seen a number of players have setbacks over the course of a practice week this year already.

There is also the fact that Chickillo has been the sparsest contributor among the four linebackers. Through four games, he has played just 64 snaps, averaging just 16 snaps a game. Jones, in comparison, has played 198 snaps.

Arthur Moats has played 172 snaps, while James Harrison has logged 134 snaps. It will certainly be interesting if the Steelers will ask Harrison to log upwards of 80 percent of the team’s snaps on Sunday, assuming that Jones will be unable to go. Chickillo is capable of playing on both sides—all three of them are, in fact, but he has not played more than 20 snaps in a game.

The only real solution to this conundrum is asking Chickillo to take on more snaps than he ever has. He has five tackles on the season, including special teams, on which he has recorded two of his tackles. Moats may be asked to play the majority of the game as a result, and with the Steelers, he has always been a rotational contributor.