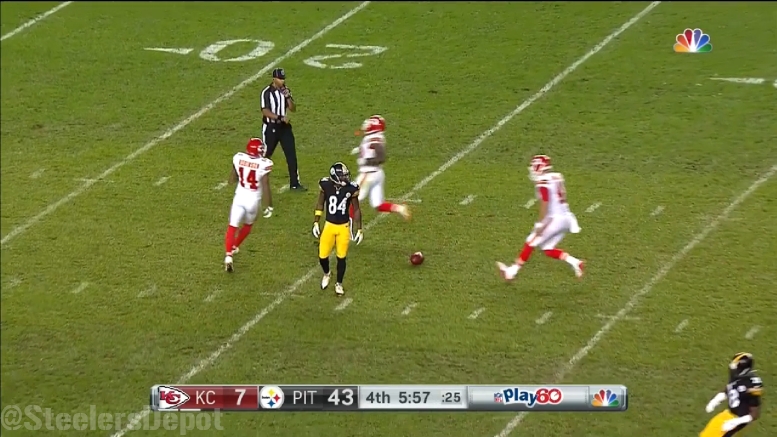 Question: Will the Steelers consider a second option at punt returner while Eli Rogers remains out?

You may have noticed at the end of the Steelers’ last game at the Chiefs that the visiting team punted twice late in the game, with Antonio Brown back deep to receive them. In both instances, he demonstrably had space to make a move, on which he normally would.

But my guess is that he was instructed to fair catch just about anything in order to reduce the risk of injury. At this point the Steelers already had, of course, an enormous lead that was virtually insurmountable, so it obviously made little sense to risk Brown to injury for a meaningless return.

Of course, with Rogers remaining sidelined with a toe injury, Brown is currently the only healthy punt returner listed on the depth chart. But while he no doubt will be able to return a punt in a close game—he did return a punt earlier in the game for five yards, if memory serves—it is obvious that the Steelers don’t want to expose him to too much contact in this role.

That is why Rogers fielded the vast majority of the punts against the Bengals—the Redskins and Eagles barely punted—but with him out, it would seem wise for them to have an alternative option to return a punt in a situation in which the coaching staff would not feel it is worth the risk to expose him to potential injury for minimal return.

Of course, they can simply continue to do what they did last week, which was just to let Brown call for a fair catch no matter where he fielded the ball and how far away the nearest opposing players looking to tackle him might be. And they probably will do this.

But they do have other players who figure to be capable of returning, and the name Markus Wheaton is probably included in this discussion, to the chagrin of many reading this. Of course, this point is moot if the Steelers don’t get out to a comfortable lead.