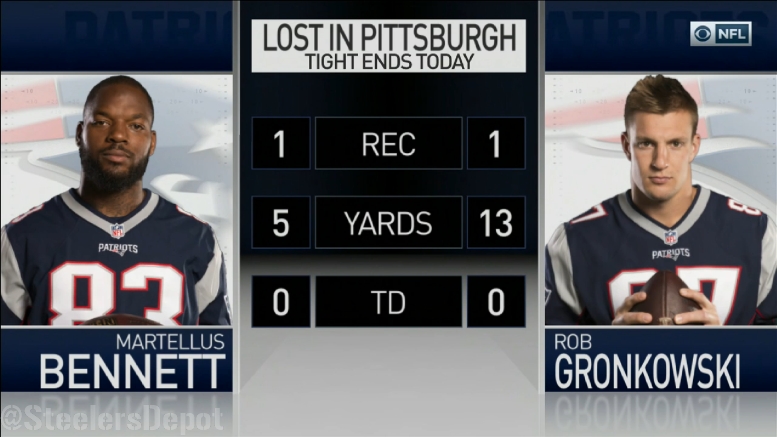 Question: Did the defense spend too much time strategizing to try to stop the Patriots’ tight ends?

Head coach Mike Tomlin talked after the game about the fact that he and his defensive minds worked to try to take New England’s talented tight ends, Rob Gronkowski and Martellus Bennett, out of New England’s game plan, and that in doing so they were willing to concede from room on the ground.

They probably were not expecting to concede 127 yards and two touchdowns to LeGarrette Blount on just 24 carries. Not after allowing a back to put up over 200 yards on them the week before. In the game, Gronkowski and Bennett combined for five receptions for 98 yards and a touchdown.

But was that really the issue in focusing on the tight ends? Because for much of the night, the Steelers actually countered the Patriots’ tight ends with their linebackers, chiefly Ryan Shazier and Vince Williams depending on who was in the game while they were rotating in and out with each other.

Perhaps the bigger issue was the fact that they spent so much time in their nickel defense, which did not seem to serve much of a function in slowing down the Patriots’ offense. Instead, it gave Bill Belichick the opportunity to use their strategy against them.

The Steelers kept working to take Gronkowski and Bennett out of the passing game, and for a while during the game, they were doing that. But instead of worrying about receiving numbers for their tight ends, Belichick used his big men to run block whenever Pittsburgh was in its nickel defense.

With New England’s offense having success any way they chose to attack Pittsburgh, however, the defense was continually off-balance, and that eventually opened up the passing options for the tight ends anyway. All in all, it wasn’t a good deal, to say the least.