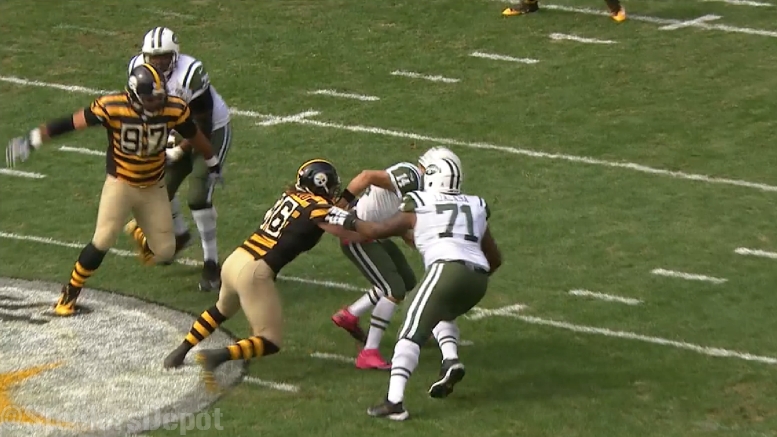 Question: Is the pass rush back?

Over the course of the first three games, the Pittsburgh Steelers recorded just one lone sack, and that came on a scramble by the quarterback after flushing out of the pocket, looking to run. Arthur Moats dropped into coverage on the play, but came up to tag the quarterback down after seeing him take off, making the tackle at the line of scrimmage for no gain, and no loss.

That was in the second game of the season, and nobody was really taking that sack seriously, nor did the coaching staff really seem to be taking the lack of pressure through two games seriously, either. When asked about the lack of pressure numbers following that game, defensive coordinator Keith Butler pointed out that the Steelers had a pretty good offense, too.

Things kind of changed when they got blown out during the third game of the season against the Eagles, dropping that one by 31 points. The Steelers hardly even got to Philadelphia’s rookie quarterback in that game, only pressured on three or four snaps on the entire evening.

After that dismal loss, Butler’s defense certainly seemed to be blitzing a whole lot more over the course of the past two weeks, and I don’t think it’s a coincidence that their overall pressure numbers have been improving.

The biggest barometer of that, of course, is the fact that they have registered seven sacks over the course of the past two games, with four coming last week, and the defense adding three more yesterday against the Jets.

Cameron Heyward got three of his own last week, but two of them were the result of overall success. Vince Williams has notched a sack in each of the past two games, but they were both, again, a product of forcing the quarterback out of the pocket. Anthony Chickillo notched the first of his career.

They say that sacks and takeaways have a tendency to come in bunches, but a lot of sayings aren’t always true when you examine them more closely. One sack in three games. Then seven in two games. Is the problem fixed?