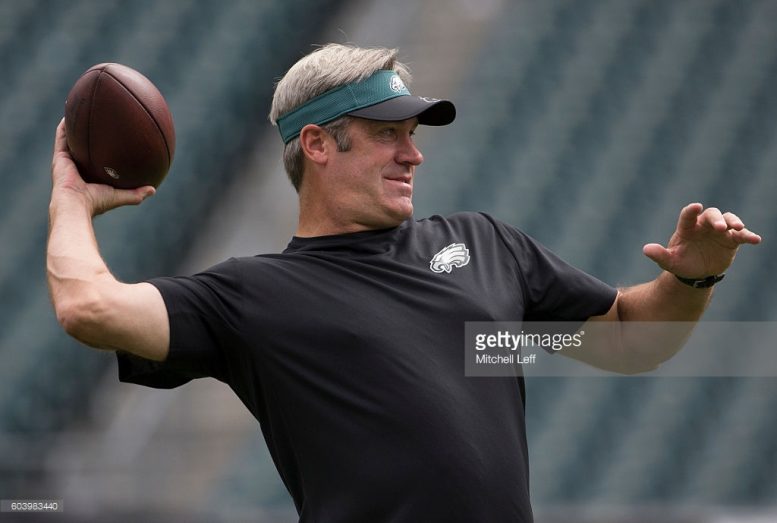 When the Pittsburgh Steelers take the field Sunday, head coach Mike Tomlin will go head to head with the newest branch of the Andy Reid coaching tree, Philadelphia Eagles head coach Doug Pederson. The Steelers have some familiarity with Reid as they are 3-3 against him all-time and defeated his mentor Mike Holmgren in Super Bowl XL to win ring number 5. The similarities between Pederson and Reid are stunning both on and off the field, and these correlations are worth examining if the Steelers want to leave Philadelphia with a record of 3-0.

It’s fair to say that Reid and Pederson have a history.  Reid has been an NFL head coach for 18 seasons. He was originally hired to be the head coach of the Eagles in 1999 and spent 14 seasons in Philadelphia amassing a 130-93-1 record and one Super Bowl appearance. During Reid’s first season as head coach his starting quarterback was none other than Pederson.

A decade later, in 2009 Pederson was brought on board as an offensive quality control coordinator. He was quickly promoted to quarterback coach the next season. Reid was eventually fired by the Eagles and hired by the Kansas City Chiefs. Pederson made the decision to follow Reid to Kansas City and was promoted to offensive coordinator in the process.  So it comes as little surprise that when the Eagles decided to part ways with last year’s head coach, Chip Kelly, they decided to hire an Andy Reid protégé in hopes of duplicating the success the organization enjoyed when Reid was at the helm.

There’s much more in common between Reid and Pederson than the coaching tree they come from and the Eagles.  They both have similar ideas on what it takes to run a winning team and an effective offense. For example, the two quarterbacks that Reid has used throughout the bulk of his coaching career are Donovan McNabb in Philadelphia and Alex Smith in Kansas City. When Pederson was hired as head coach of the Eagles he made the decision to draft and play quarterback Carson Wentz, who the Steelers will face on Sunday. All three quarterbacks were taken 1st or 2nd overall in their respective drafts.

This emphasis on quarterback play is shared by Reid and Pederson, not to mention all three draftees boast similar skill sets:  Solid arm strength, accuracy, good decision making, and a willingness to break the pocket and run if needed.  It’s obvious that Pederson was taking notes on Reid’s decision making over the years when it came to identifying a winning NFL quarterback.

Personnel similarities don’t end there.  Both Reid and Pederson implement very similar offensive personnel. In the back-field, their running backs that have the ability to catch the ball out of the backfield and turn open space into big plays.  For Reid, it’s Jamaal Charles and his talented backups Charcandrick West and Spencer Ware, for Pederson it’s Ryan Matthews and Darren Sproles. This leads to a lot of safe, conservative screen passes to the running backs.

In fact, when Pederson was the Chiefs offensive coordinator in 2014, they averaged five screens per game to running backs for a third of the season.  Both coaches like to use their respective tight ends as passing threats as well, especially in the red-zone. Reid uses Travis Kelce while Pederson implements Brent Celek and Trey Burton until Zack Ertz is healthy enough to play.

But the biggest commonality between the two coach’s offensive schemes is their concentration on not turning the ball over. Reid’s Smith only threw 7 interceptions in all of 2015 and Eagles rookie Wentz has yet to throw one in his first two NFL games.

So when 4:15 rolls around Sunday and the Eagles start to play keep away with the ball and implementing a lot of screens, conservative throws and runs, you don’t have to check to see if Reid got re-hired in Philadelphia. You’ll know it’s the latest branch of the Reid coaching tree branching out and attempting to make its mark on the league as the Eagles’ Pederson continues to call his own plays.