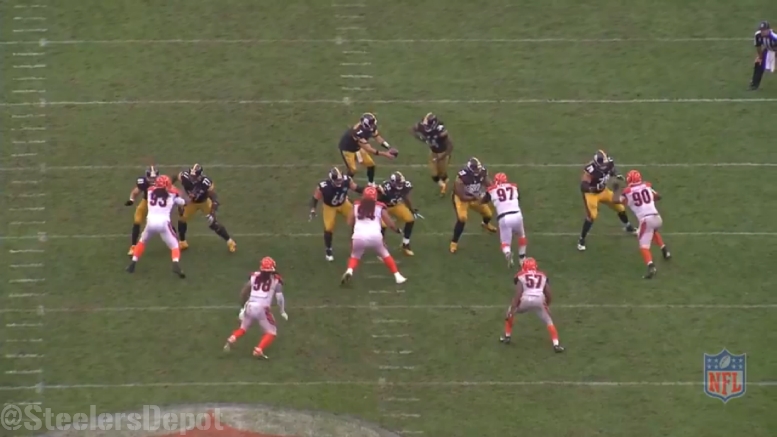 The use of the play-action pass as it relates to the Pittsburgh Steelers’ offense is a topic that really interests me, because during the early tenure of the Todd Haley offense, quarterback Ben Roethlisberger has utilized it at a level that was far below average.

In the season opener, the Steelers used it with relative success, and did so on about 15 percent of their pass attempts, which is more than they normally would, but with such a small sample size from one game with an average number of pass attempts, it would be unwise to try to draw much of a conclusion from the data.

That is why I wanted to pay especial attention to it during Sunday’s game to see how Roethlisberger and the offense utilized the play-action against a secondary such as the Bengals. The Steelers offense ran the ball quite a bit to set up the play-action, and it did yield some positive results.

On 39 drop backs against Cincinnati—which includes a sack and a scramble—Roethlisberger used play action nine times, which represents a usage rate considerably higher than their usual, nearing a quarter of the time, at a bit over 23 percent overall.

In terms of success rate, the offense averaged a bit under 11 yards per play on those nine plays, for 98 total yards, and that includes a 14-yard scramble in the mix. On pure passing attempts, Roethlisberger completed four of eight passes for 84 yards, averaging 10.5 yards per pass attempt.

Two passes resulted in explosive plays, one being a check-down throw to DeAngelo Williams that included 19 yards after the catch, as well as the 53-yard completion to Sammie Coates in the third quarter that led to a touchdown on the next play.

Two of the incompletions were on deep passing attempts, while the other two incompletions were a high pass short to Jesse James that went off his fingertips on a leaping try, and another short incompletion over the middle with a linebacker draped all over Xavier Grimble on a play that probably should have drawn a penalty.

Through two games’ worth of data now, the Steelers have used play-action on 15 of 77 drop backs, just a touch under 20 percent, which is becoming more in line with what the average team might utilize over the course of a season, and suggests that it may be a bigger part of Pittsburgh’s offense this year.

The statistics suggest that it should be, as the Steelers have averaged over 10.2 yards per play when using play-action, gaining 154 yards, which is about 28 percent of their total net passing yardage in the first two games. The Steelers are averaging 6.3 yards per pass attempt without play-action.

The Steelers have recorded nine explosive plays through the air thus far this year, with three coming off play-action. They have had no problem over the course of the first two games keeping defenses honest with the run game, so it should continue to be an effective weapon for the offense.